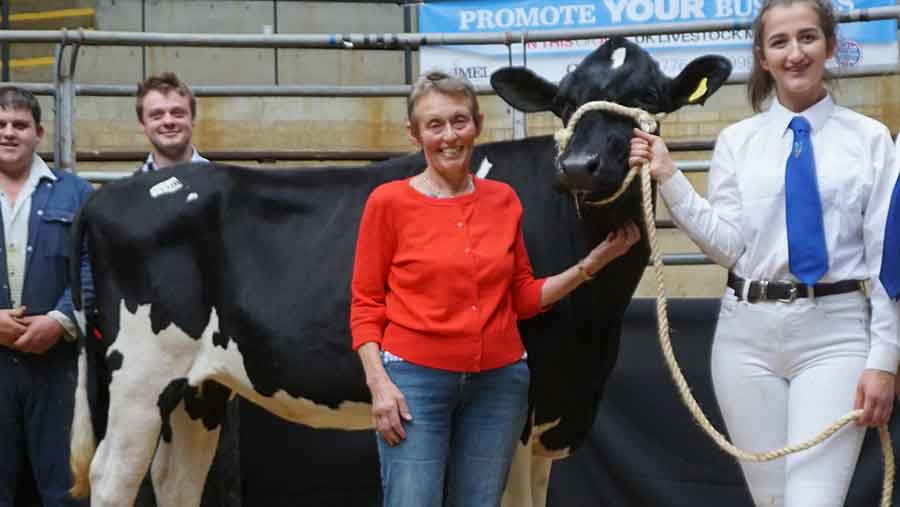 Calls of 2,000gns or more remain commonplace for first quality fresh heifers around the marts, with a recent highlight being 4,400gns hit by a bulling heifer at Lancaster on Monday (21 August).

Strong demand was noted at the Arnot’s youngstock dispersal of Arthur and Janet Whitlow, Preesall, Fleetwood, which topped with heifer Arnot Carlina 270 who sold to Wyevalley Dairy Genetics Ltd.

The sale comes after the milking portion of the herd headed to Metcalfe Farms, North Yorkshire, to be developed after a private deal.

Next, at 3,300gns, was another of the Carlina family, Arnot Carlina 258, who is by Larcest Commander, knocked down to Middle Shorrock Farm, as in-calf heifers achieved an average of 1,908 on the day.

Bulling heifers averaged 1,277gns and two home-bred bull levelled at 2,500gns, peaking with Arnot Crafeeti. He is a Ladys-Manor RD Grafeeti son out of Carlina 158 and sold to Craig Fad Farm.

Lancaster’s monthly sale, meanwhile, topped at 2,200gns for Liscabank Asterix Sweet from AB and J Parkinson and Son. She is 14 days calved and giving 35kg and is from a VG or EX lines going back through 11 dams and topped a Parkinson consignment that averaged £2,026.

This was according to auctioneer Fred Spurgeon, who knocked down the day’s champion from the Critchleys, Wrea Green, to GT and BF Blezard, Ribchseter, Preston, for £2,140.

This March 2015-born fresh heifer is by De-Su sire Freddie Denim, with a line of milky Newfold dams in its pedigree.

Whytil Goldfish Lady Beatty 554, sold giving 38 litres. She is out of a 13,696kg dam, while her Glauco-sired herd-mate is out of a Whytil cow that gave 14,826kg in her third lactation.