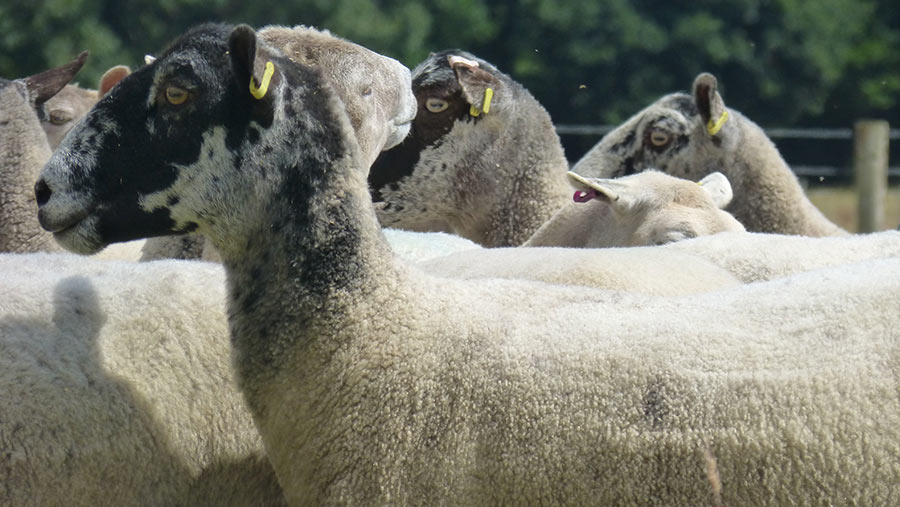 Early trade has been about £10-£15 back on last year’s record-breaking level, although best sorts have been close to last year’s prices and older ewes closer to culling have sold well.

Strong cull ewe prices and an average new season lamb SQQ of more than 300p/kg in July are two bullish factors. But, just as in 2018, a dry summer has limited buyer confidence.

Exeter’s August Fair of North of England Mule shearlings averaged £164 on Monday (2 August), which was £13 back on the year.

The sale was a “hard slog” for Kivells auctioneer Russell Steer, but he said it was no worse than many vendors feared.

“A lot of the area is very burnt up and short of grass,” said Mr Steer.

“Best ewes were not far behind last year – £165-£170 bought a good sheep. Very little made less than £150, despite some of them being very lean and showing effects of the weather.”

Lower demand had already been seen at Exeter’s July Fair (12 July) of mainly Suffolk Mules, where many buyers were looking for 30-40% fewer sheep. Trade was back £15-£20, with Suffolk Mule shearlings levelling at about £175 apiece.

In contrast, Truro’s trade has disappointed vendors a little, said Ed Harris of Lodge and Thomas.

“It’s still very dry down here,” said Mr Harris. “There’s been a little bit of rain, but not enough to make much difference.

“Some farms have had to feed bales to ewes in July, which has knocked confidence a little bit, although we’ve not sold big numbers, so it’s difficult to draw conclusions.”

Breeding sheep trade has broadly been “in line with last year” at Hailsham, although only small numbers have been under the hammer, said Nick Young of South Eastern Marts.

He said the flying cull ewe trade had continued and would put a strong bottom in breeding prices.

“If anything, culls have been stronger, especially for the heaviest killing sheep as numbers have dried up since the Eid-al-Adha festival,” said Mr Young.

He said rain was needed to boost confidence before the market’s sheep sale at the South of England showground, Ardingly, where there could be up to 15,000 ewes for sale on 15 September. “If we get rain, I’m pretty sure the trade will rise,” he said.