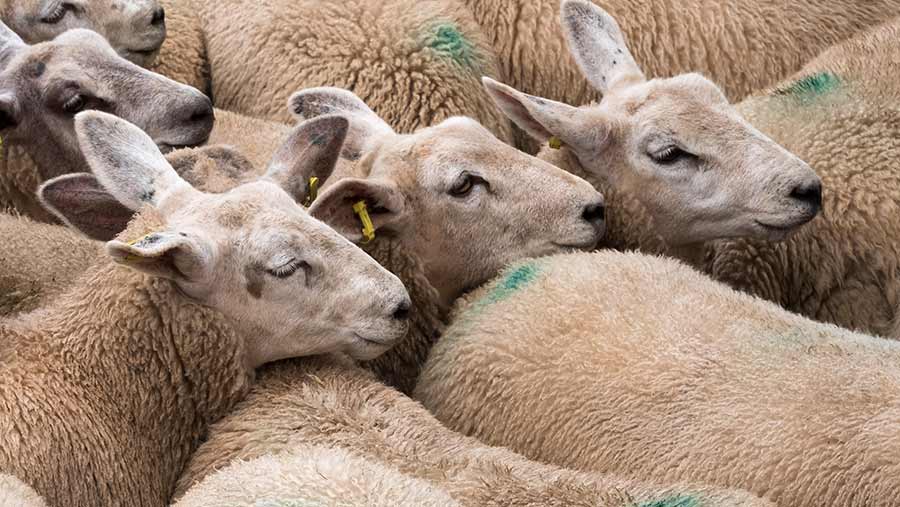 Opening store lamb sales have understandably seen prices back on the year after the driest summer for a generation has left buyers cautious.

Some centres have been pleasantly surprised by July prices, particularly for short-keep types, although much rests on rainfall and the growth of root crops and late summer grass.

Trade is dearer than expected, although still back £2-£3 on the year at Hereford, where store and breeding sheep auctioneer Greg Christopher has seen a three- to four-week delay in the sheep season.

A challenging lambing and a late spring mean there are fewer lambs about and some lambs are slower coming forward, with almost 4,000 fewer head sold than this time last year.

“Without the difficult dry summer and worries about root crops and grass I think the trade would be flying because of the way hoggetts were earlier this year,” Mr Christopher told Farmers Weekly. “It’s just knocked trade – people are understandably cautious.”

Plenty of pens of stronger continental lambs made £64-£69, topping with ram lambs at £76.

“Rain will make a big difference. Buyers in the Midlands will be looking at getting forage crops grown and I don’t think we will see many buyers from west Wales until September – if at all – although if more rain comes, trade could find another level.”

Early store lamb values have been pleasing at Leyburn given the challenges facing farmers this summer, according to Stephen Walker, mart manager at Leyburn Auction Mart.

Good, strong lambs helped keep averages up, as 387 averaged £60.90 – £1.40 back on the year. Blue Du Maine-cross lambs form Keith and Johnny Stables sold to £73 and took the championship.

Suffolks sold to £62 and continentals made £60-£69 elsewhere, with stronger lambs selling well and the best end making the same money as last year.

Mr Walker is yet to see much evidence of increased store lambs coming forward for sale due to concerns over grass and getting lambs sufficiently finished.

“Sheep can be kept quite cheaply in these conditions as long as they have water and shade, so I don’t think there are more lambs being sold as stores yet.

“A few months ago, we were discussing store lamb prices, hoping trade would actually be up, wondering whether they could they be £5-£10 dearer, but of course that’s not happened because of the weather.”