A year-record of eleven cows broke the £2,000 mark at Sedgemoor’s monthly dairy sale on Saturday (23 September) and topped with a non-pedigree heifer at £2,100.

A good entry of 128-head of mostly milking cattle and dry cows saw a strong trade, although staler cows were harder to sell.

Firmer trade was noted at Gisburn on Thursday (21 September) as dairy cattle broke £2,000 six times and eight made £1,800 or more.

More than 90-head went under the hammer, with trade topped by a non-pedigree fresh heifer from RG Johnson, Felliscliffe, Harrogate, at £2,120, who was sold 12 days calved and giving 32 litres to T and M Green, Wigan, who bought three other dearer lots.

Next at £2,020 and securing the championship was Abberhouse Shockwave Matilda 2 from Jennings Farmers, Ripon, which was bought by W Oldfield, Gisburn. 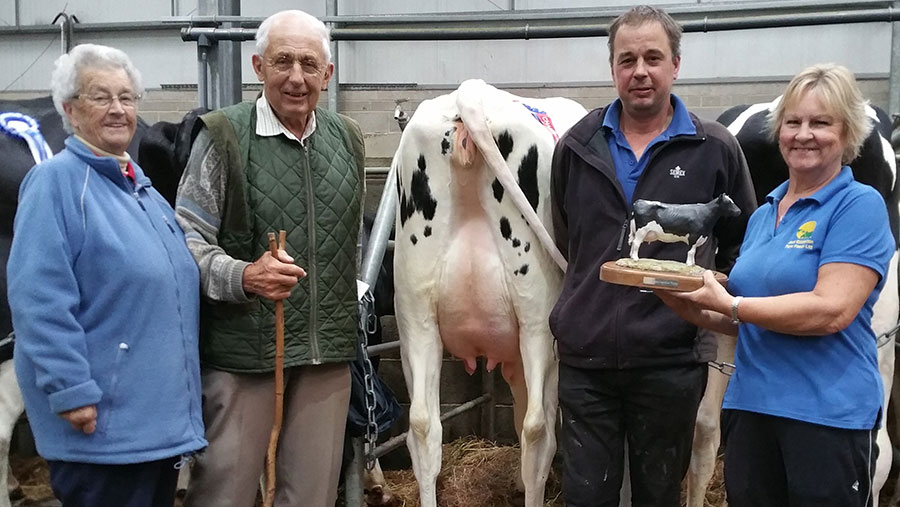 Jennings Farmers won the Championship on the day and saw a £2,020 bid

Matching this was a third calver from WJ and I France and son, Chipping, Preston. She was knocked down to WTC Farms, Hutton, Preston, as the dearest cow on the day.