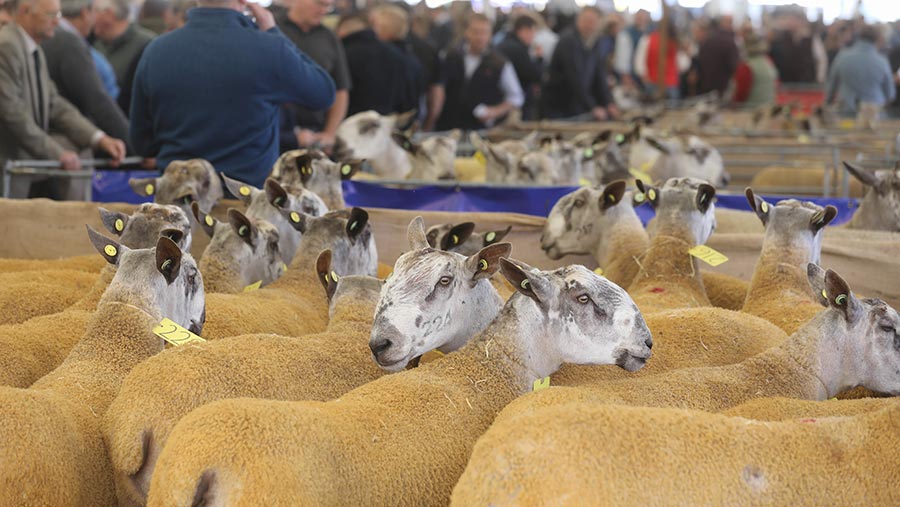 Trade was faster this year at Kelso on Friday 13 September, as spirited commercial and pedigree bidding lifted overall averages by £16 to £698.

This is the second-highest average after the record £709 in 2017, suggesting commercial lamb producers are not perturbed by an impending Brexit.

He said mules had been a better trade this year, which helped demand for Bluefaced Leicesters, adding that there was obviously enthusiasm from many breeders to keep producing mules.

Mr Hamilton said trade in the ring was above vendors’ expectations, with 277 shearlings at an average of £1,043 and 30 lambs levelling at £634.

“Trade has been far better than expected considering the doom and gloom surrounding the industry and Brexit,” he told Farmers Weekly.

“People were looking for rams with power, good colours and correctness. The tups ticking those boxes sold very well.”

Texels saw healthy demand lift averages and the better end of the pedigree and commercial Texel shearlings see a fast trade, as averages lifted £93 on the year to £975.

Lawrie and Symington auctioneer Sandy Moore said the top end of the sheep were very good to sell, but vendors were becoming more selective.

He said animals with good skins offering size and the potential to throw good Texel-cross females were in demand.

“The breeding sales have been fairly good this autumn so far,” said Mr Moore, who said a lower prime lamb trade through 2019 had not prevented commercial farmers from investing in good rams.

Nick Woodmass of C and D Marts said crossbred tups remained popular, with the Beltex-cross Texel the easiest to sell and most sought after.

“People were after tups with good skins and plenty of shape to go on and breed quality lambs for the export market,” said Mr Woodmass.

“Good sheep were easier to sell than last year,” he told Farmers Weekly. “People are after those sheep with growth, muscle and good skins. Those trying to produce a commercial crossbred ewe look for smooth black hair on the heads and legs.”