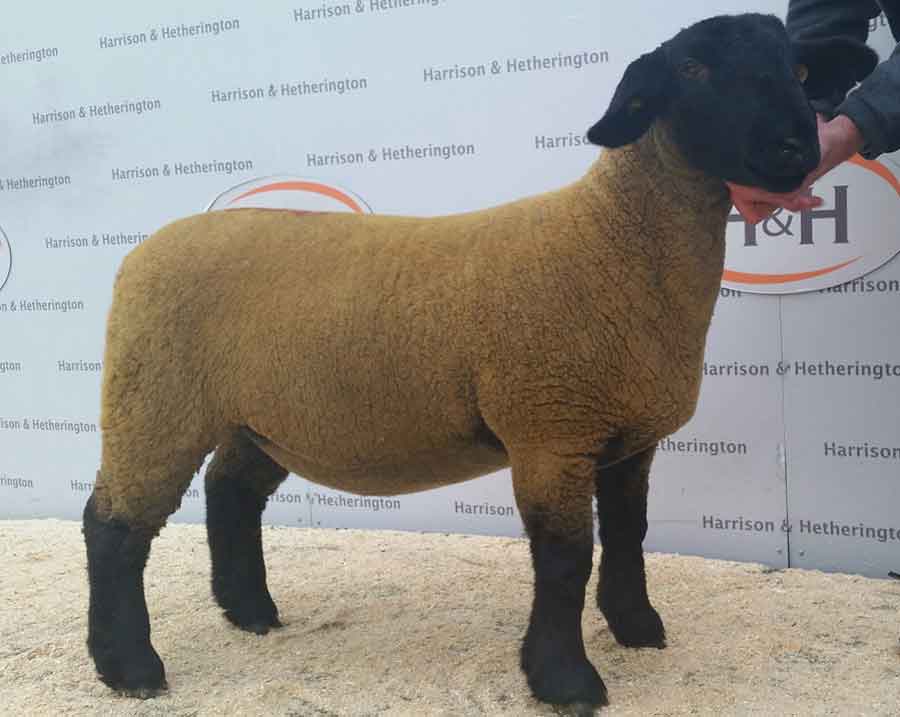 High numbers through the ring and strong demand for all types of breeding sheep on offer meant the 15th Beeston sale of Suffolk females was probably the “best ever”.

Averages were £119 up on the year on Saturday (5 November) for more than twice the number under the hammer with bidders thronging from 34 UK counties and three Belgian buyers in attendance. Gimmers averaged double last year’s prices for twice the number sold.

Leading a high-quality yarding, which included the dispersal of Keith Taylor’s Manordale flock, Hilderstone, Staffordshire, was a three-crop ewe from the Knockem Flock of Bryden Nicolson, Highfield Farming, Berwickshire.

The red-ticket winner impressed Northern Irish judge Mark Priestley, who took her home to his Limestone Flock, Downpatrick, Co Down, for the day’s top call of 2,400gns. The “outstanding ewe” carries a single for a mid-January lambing from Sunnyhills the Stig, herself a daughter of Burnview Bruno.

Another Knockem female sparked a flurry of bids culminating in a 2,100gns call from Stephen Cobbald, Acton, Suffolk. This one-crop ewe by Lakeview Heeza is out of a Thurston ewe and carries twins to the 25,000gns Rhaeadr Rolex.

Mr Cobbald also secured the reserve champion and first prize gimmer lamb for 2,000gns. This was from the Manordale consignment, and carries twins to Burnview Hurricaine following a first place this summer at the Cheshire show.

Auctioneer Clive Norbury noted the strong demand for every type of sheep offered, attributing a great day’s trade partly down to an improved sheep market since the summer and suggesting popularity of the Suffolk could be growing.

The Kexbeck flock of Pamela Lupton, Galphay, North Yorkshire, topped trade at Borderway on Friday (4 November), where a small offering of ewe lambs was £452 dearer on the year and 20 shearling gimmers were up £123.

Standing head and shoulders above the rest at 2,000gns was a Rhaeadr Reggae daughter born this February out of a Rhaeadr Skyfall ewe. She is a February-born twin to a show ewe lamb and caught the eye of MA Evans, Llanrhaeadr, Denbigh.