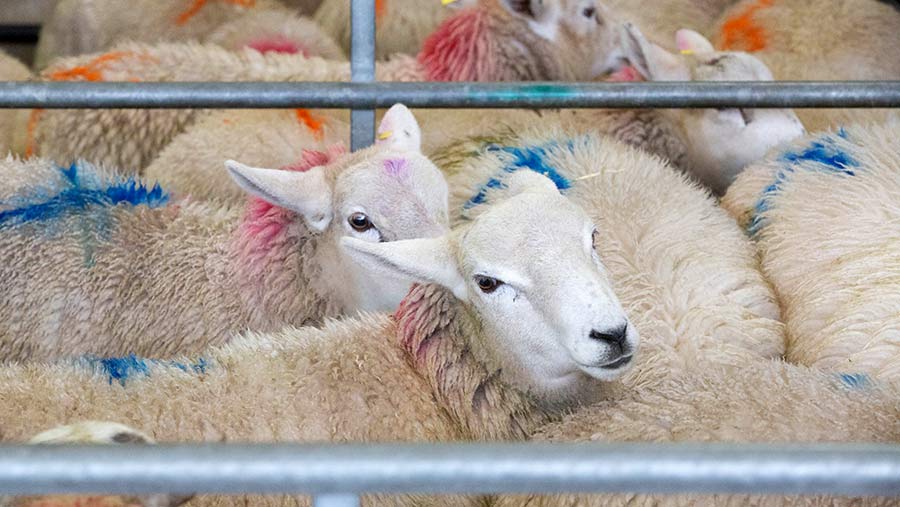 Great British average hogget SQQs (standard quality quotation) have remained below the 200p/kg mark so far this year despite a 13% drop in supply on the year.

The country’s marts have sold 93,011 fewer hoggets this year compared with 2018 and deadweight throughputs have also down slightly.

Auctioneers say that, despite lamb numbers being low, buyers are cautious after having their ‘fingers burnt’ last year when lambs made £150 to £180 a head (330p/kg liveweight).

A ‘disappointing’ trade has been witnessed for store lambs at Melton Mowbray, which auctioneer Tom Greenhow describes as ‘understandable’ given the current market uncertainty.

Mr Greenhow said lighter lambs were in short supply but that there were lots of heavy, well-fed hoggets around.

“Some people are sending lambs a little bit earlier, but for a lot of finishers it’s business as usual,” he told Farmers Weekly. “Plenty of finishers with thousands of hoggs to sell still haven’t started drawing yet and are waiting for April as normal.

“One thing I’ve noticed is that abattoirs blew money last year and they would rather kill fewer sheep than give £140 and £160 a lamb like last year.”

Lighter lambs (32-39kg) are also trading well in south Wales, where the Asian and export buyers are supporting prices of 198p/kg, making them almost match the heaviest lambs on a headage basis.

This is according to auctioneer Matthew Nicholls of Sunderlands, who sells at Talgarth and Hereford.

He noted that some lambs were £15 a head back on the year on Friday (1 March) despite there only being 539 through the ring, compared to 1,000-head or more in a normal year.

“Markets in this area are struggling for numbers,” Mr Nicholls said. “This will be down to last year’s long winter but it could some vendors be holding back in the hope that trade lifts – it’s currently nowhere near last year.”

He said stronger Beltex and Texel lambs were supplying the domestic market and local butchers, but trade was heavily reliant on export demand.