It was ladies’ day at the autumn Limousin sale at Newark on Saturday (8 October), with top prices being paid for cows and calves from noted local herds.

Auctioneer Paul Gentry said trade was strong for well-bred, correct cows with calves at foot and back in calf again.

“There was a real demand for the quality outfits on offer, with the ability to buy three lives in one package once again tempting buyers to bid well.”

Topping trade at 6,000gns was a fourth calver from the Hazard family’s Mereside herd, Grantham.

This was Mereside Fumoselle, a daughter of the imported sire Cidre and out of Mereside Umoselle, a Malibu daughter.

She sold with a bull calf, Mereside Lennox, at foot by Honeymoor Favourite and was the choice of Andrew Bishop, Eldersfield, Gloucestershire.

She has been AI’d to the British Blue sire Attribut De Fond De Bois. 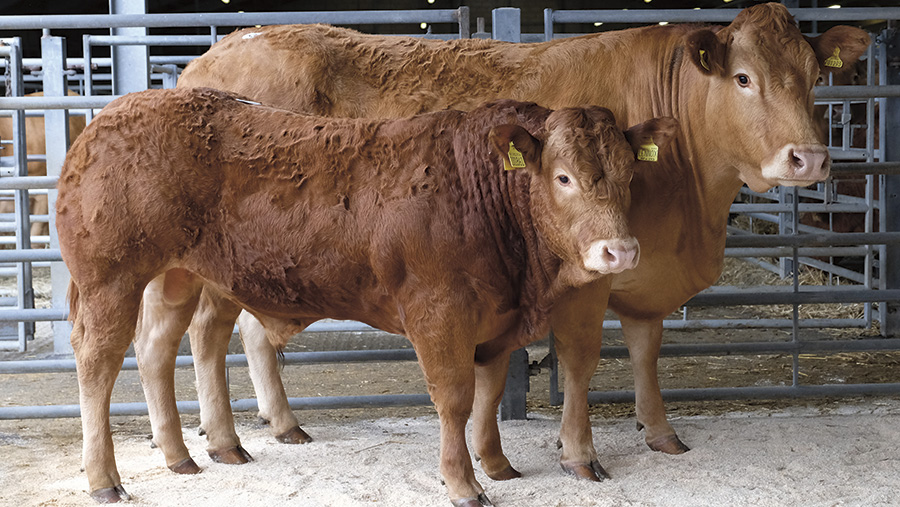 Leading trade at Newark with a 6,000gns bid was Mereside Fumoselle from the Hazard family, Grantham © Tim Scrivener

Second best of the day at 4,400gns was another from the same home and again a cow-and-calf outfit.

Daneuse, sired by Uniprix, is out of Tendre, a Gabin daughter and sold with her fifth calf at foot, a cross-bred bull calf by the Blue sire Embleme Du Pone De Messe, and having being AI to another Blue sire, Toscan Vd Ijzzer. She was knocked down to the Bowring family, Chesterfield, Derbyshire.

Then at 4,200gns was the fifth calver Mereside Dawn.

Consigned by the Hazards, she is is by Nimbus and out of the Obus daughter, Mereside Bracken.

She sold with a bull calf at foot by Honeymoor Favourite, Mereside Marshall and having run with the same sire again and was bought by Richard and Judy Fountaine, Milton Keynes.

Following her at 4,000gns was Burnbank Ida, a Burnbank Frank daughter bred by Douglas and Lynda Graham and sold by Les Wilson.

She’s out of Burnbank Britney, a Redstone United daughter and sold with her heifer calf at foot by Dinmore Inky, Wilson Mischief.

Buying her were Chris and Laura Beck, Halesworth, Suffolk.

The best price in the bulls on offer was a brace of 3,800gns calls, with the first coming for Calverton Lad from Richard and Judy Fountaine.

This Etudiant son, which was overall champion in the pre-sale show under judge Stephanie Dick, is out of Withersdale Dido, a Salomon daughter and sold to Ashley Smith, Cullump St Mary, Diss.

Then making the same money was Trisant Loosecannon from G and E Jones.

This Swarland Edie son is out of Trisant Ffiffi, a Ronick Hawk daughter and sold to Anita Padfield, Potter Heigham, Great Yarmouth.

Following those at 3,500gns was Ewdenvale Lazio from Stuart Wilde.

This son of the home-bred Ewdenvale Everest is out of Ewdenvale Gemma, an Ampertaine Abracadabra daughter and sold with a beef value of +46 to JG Green and Son, Messingham, Scunthorpe.