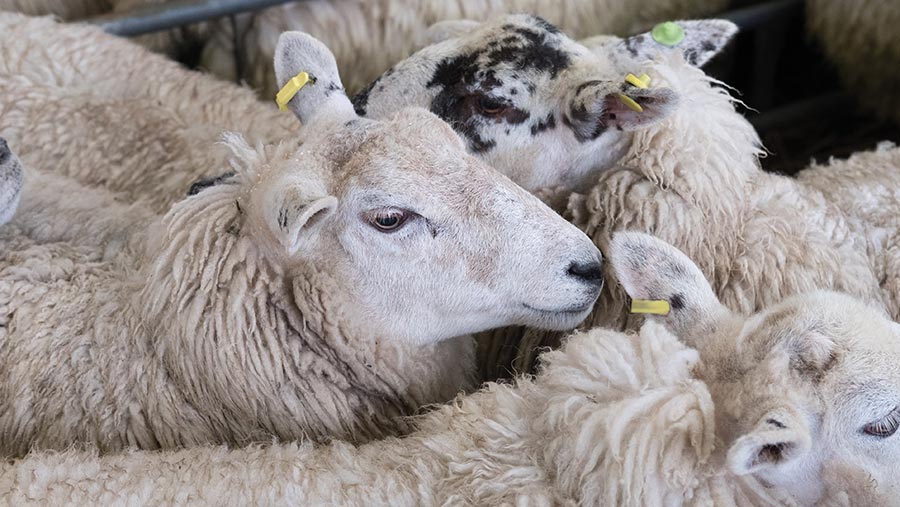 Phenomenally high prices are leading to lighter lambs being sold at markets, as sheep farmers draw hard following a rapid end to the hogg season.

Auctioneers report that vendors have opted to sell 38kg lambs for £120-odd a head, although this means a premium can be had for the 41-42kg offerings.

Markets reported a strong start to the week, with Monday and Tuesday’s new-season lamb SQQ at 332.8p/kg and 330.5p/kg.

But, with grass limited by challenging snowy conditions in February, a frosty April and the wettest May on record in some areas, feed costs have risen to keep ewes milking well.

Strong trades have tempted deadweight vendors back to Sedgemoor, according to Paul Ashton of Greenslade Taylor Hunt.

Mr Ashton said Sedgemoor’s old-season lambs dried up very quickly this year, dropping from 1,400 to 200 in a few weeks.

Combined with many farms drawing lighter lambs for sale, this has meant the market has sold 30% more new-season lambs (NSLs) than at the same time last year.

Averages lifted 12-13p/kg on the week on Monday (31 May) as 1,553 NSLs averaged 322p/kg. This followed two weeks of lower averages, but vendors were able to react by holding on to lambs.

“This could be a theme this season,” said Mr Ashton. “Currently, prices have been strong so we’ve seen more lambs sold at 38kg.This means if the price drops one week, the farms can hold on to them, sell them at heavier weights, and still get the same value per head.”

He said that there was less meat going into the system because many lambs were 2-4kg lighter than they would normally be.

“If more lambs are going at 38kg than 42kg, that’s 4kg less. Across 10 lambs that’s an extra lamb’s worth of weight missing.”

Looking ahead, Mr Ashton said breeding sheep sales were set to be very strong, with talk of Suffolk cross Mules – a mainstay of the area – being £170-£180 a head and the best making £200.

With rain and warmth now producing good grass growth across the country, fears of tight forage supplies have been allayed for now, he added.

He said that some farms had already started putting ewe lambs aside and keeping older ewes they might normally cull to minimise autumn spending.

He said that the strong hogg prices in the new year led to many ewe hoggs being killed, which would make the autumn sales strong, due to both quality and supply.

“A lot of people expect breeding sheep trade to remain very firm. The bottom end of the hoggs have been killed, so in a lot of cases it’s only the best that are left.”

Farmers are also drawing lambs as fast as they can across South Wales and the borders.

Matthew Nicholls, auctioneer for Sunderlands, said 38kg lambs made 320p/kg on Friday (28 May) at Talgarth.

“The lack of weight has put value into the heavy hoggs, which are selling up to £160 a head,” said Mr Nicholls.

Mr Nicholls said new season lambs are coming forward in strong numbers and volume is ahead of where it was this time last year.

“Numbers will now increase, but hopefully to meet demand. I can see the trade holding fairly steady now for the next four-to-six weeks.”

He said next month’s (19-23 July) Qurbani (Eid al-Adha) could lead to a demand spike later in the summer, when larger numbers of lambs typically come onto the market.

70
Last week’s grass growth (kg dry matter/ha) on Northern England grass check farms. This is almost double the growth at the start of the month (AHDB)

-15.8%
How far back on the corresponding week last year the new-season lamb throughput was last week, at 53,500-head (AHDB)