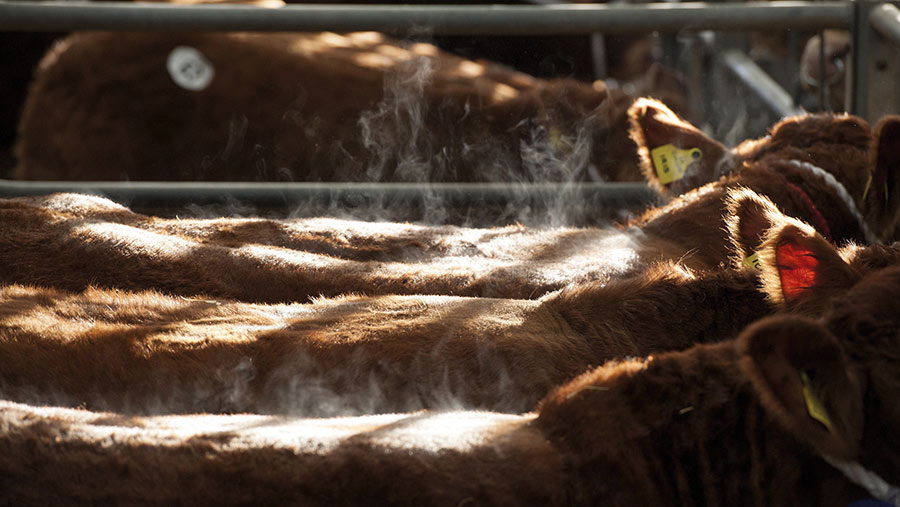 Recent factory price drops have caused some pessimism this week and could coax more cattle forward from finishers worried about further cuts.

Some believe the falls are the result of large finishers marketing a high number of cattle to cash in on improved prices. Defra’s August slaughter figures were up 1.7% on the year and steer, heifer and bull carcasses were down 2.2kg, 0.9kg and 2.5kg, respectively.

AHDB figures show continental cross yearling steers are about £91 dearer on the year at £774 a head (week ending 12 September), leading to hopes of a strong calf trade.

“Big yarding cattle already putting flesh down have been a very strong trade,” said Mark Elliot, director at Leek Auctions. “Buyers are looking at the beef price and they can see a margin in them.”

He added that younger suckler-bred stores were very good to sell, but the rougher-coated 17-22-month stores were not quite as dear as they were in late August.

Northern Scotland’s early suckled calf sales are up 60p/kg on the year as a good barley harvest and a strong beef market have led to firm demand.

“Covid-19 has enhanced the value of meat,” said Mr Spencer. “Fewer Brits have holidayed abroad and more people are cooking at home.”

“If the current supply and demand balance remains, that should fuel the weaned suckler-bred calf price to 250p/kg plus.”

Averages were back 2p/kg at Stirling Caledonian Marts on Monday (21 September), with slightly lower quality, rather than a slower trade, resulting in a lower price.

“Some have sold cattle a little earlier this year, with animals coming to the same money but sooner,” said auctioneer Oliver Shearman.