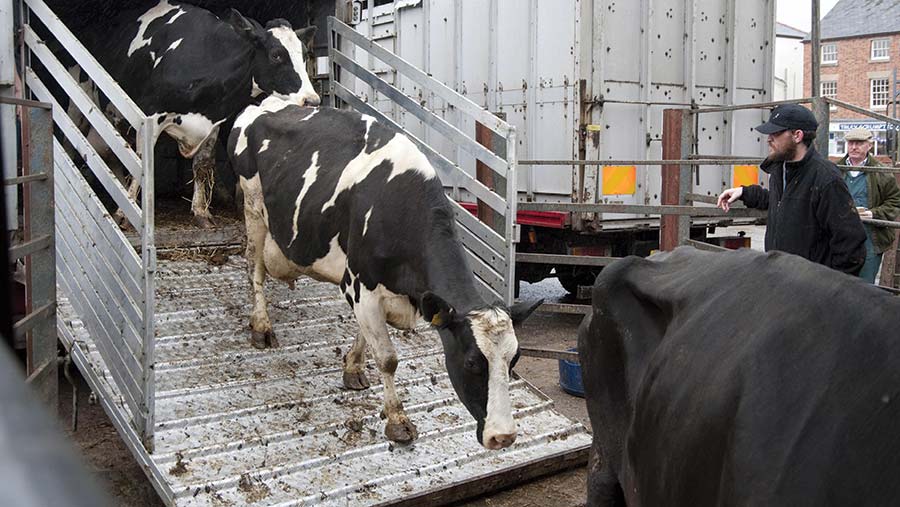 Dairy cows averaged 103.9p/kg last week, according to AHDB data, a gain of 9p/kg on the previous week.

Milk processor cuts – both in price and farm output – and a weak euro have given farmers more reason to cull cows and less of an incentive to send them to Europe.

Factory throughputs were 4.4% higher on the year for the six weeks ending 18 April, which could indicate dairies are marketing more cows. Despite this, deadweight prices have shown stability recently, averaging 209-211p/kg in April.

Trade for the plainer out-of-parlour dairy cows sold at Dumfries each week has held up well, according to C and D Marts senior auctioneer  Harry Begg.

Cows had not been crossing over to Northern Ireland to be culled in Irish abattoirs of late, he said, but there had been as many regularly local buyers as ever, meaning plain dairy cows had regularly hit 85p/kg.

He predicted any price falls would not surpass 5p/kg.

“Last year, we saw a bit of export trade as well, over to Ireland,” said Mr Begg. “But the biggest thing we’ve seen is the reduction in numbers here.”

Mr Begg said cow entry had fallen by a “good third” from 60-100 cows a week, in part because some farms in the area had signed up to Arla 360 standards, which ruled out live marts as a marketing option for cull cows.

Cull values were 10-15p/kg dearer on the week at Carlisle on Monday (28 April), with prime and store cattle auctioneer Grant Anderson reporting a good entry of well-meated cows.

An entry of almost 300 cull animals saw about 10% bought for feeding. The best beef cows hit 160p/kg and more, with the best dairy animals selling for 125p/kg and plainer sorts at 85p/kg.

Dairy cow trade was strong and averaged just over 100p/kg.

Good demand for mince was helping support trade, he explained, although he added that the clean cattle ring was harder work.

He said there was currently “little interest” in cows from Irish firms.

“Yesterday we had a new buyer who bought a lot and there was more meat on the cows, possibly as a result of people waiting to see what the drop-and-go trading was like,” Mr Anderson said.