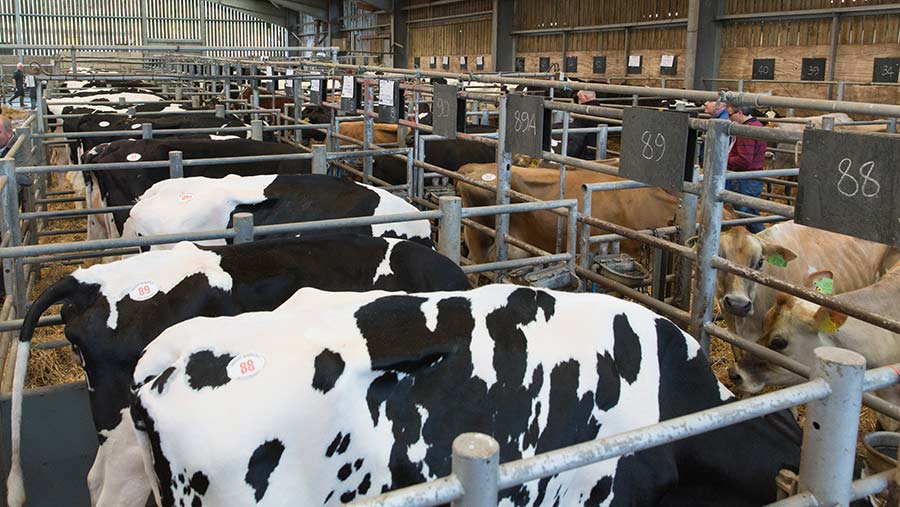 Commercial dairy cattle prices are more than £200 dearer than this time last year, with a shortage of stock creating a buoyant market.

Freshly calved commercial heifers averaged £1,502 in July, according to AHDB data. This is £212 dearer than a year ago (+16.4%) when feed worries were hampering trade.

Auctioneers are pointing to record-level bTB culling as one of the key demand drivers, with exchange rates and tight EU cow numbers limiting the affordability and availability of EU cattle.

Dairy trade has definitely been “on the up” this summer at Market Drayton and other sale rings, where auctioneer and valuer Gwilym Richards has sold cattle.

He added that the better British Friesian heifers were making £1,600 and Ayrshires were hitting £1,600-£1,800, a price bracket previously being hit by the stronger Holsteins.

He said milk price contracts were currently mixed, with some processors still offering strong prices and others currently paying less, with some farms looking for milk to put in the tank to counter price drops.

Throughputs are up 25% at Gisburn this summer, which has been met by a timely lift in buyer interest to keep trade firm.

Auctioneer Fred Spurgeon of Richard Turner and Sons said that quality and trade were both up, with last week’s (15 August) sale hitting £2,000 or more 11 times.

A high proportion of entries have recently been pedigree cattle, with new vendors ringside since recent market closures and several farms dispersing cows on a monthly basis.

He said the trade was seeing 32-35 litre heifers and good second-lactation cows hit £2,000 and strong interest in youngstock, with nine-month-old heifers recently making £680-£700.

“I can’t get an answer from people importing cattle as to whether European cattle are too expensive or if they just aren’t there,” he said. “I think trade will remain fairly buoyant.”