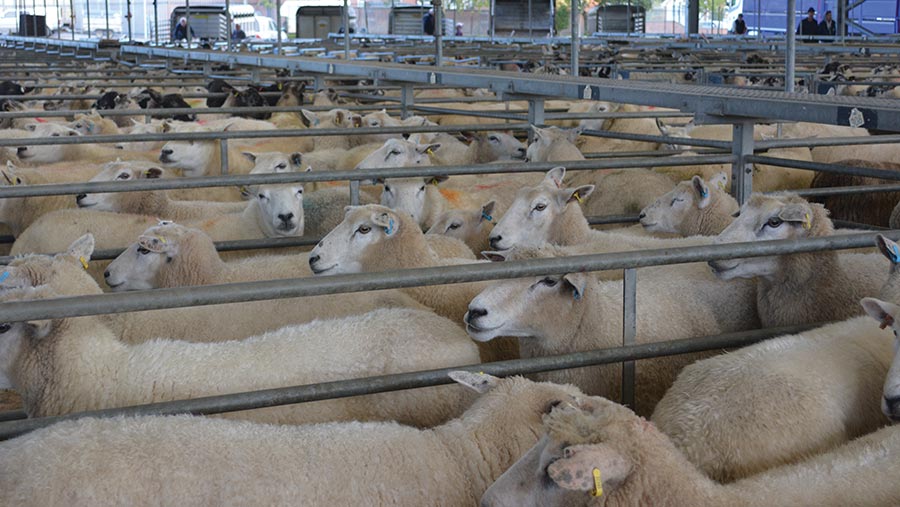 An abundance of grass and sky-high store lamb values have prompted feeders to buy more light cull ewes this autumn as a more “Brexit-proof” investment for next year.

Amid fierce store lamb prices and with so much resting on a still-undecided EU trade deal, many feeders are buying ewes to fatten on strong autumn covers and sell in the spring.

National cull ewe mart averages have remained £7-£8 dearer on the year, although they have slipped from £62 to £59 this month, taking the usual tumble as smaller ewes come forward.

However, trade is holding up despite more ewes being sold this autumn. Ethnic trade appears firm, and auctioneers say a larger-than-normal proportion of ewes are returning to farms, rather than heading for slaughter.

These factors have made light ewes a good trade at Longtown over the past six weeks or so.

Auctioneer John Walton told Farmers Weekly that more farmers had bought sheep to add condition to over the winter and sell in the spring.

“Store lambs have been so dear some buyers have bought more cull ewes to go out to feed,” he said. “Brexit won’t affect the majority of the cull ewe trade, so it’s potentially less of a gamble.”

The light lamb section is £12-£14 dearer on the year, with a lot of Cheviot and Blackface ewes being bought to feed over winter. Mr Walton said bigger, stronger ewes were still wanted by the ethnic trade and were making £7-£10 more than last year.

Farmer buyers are also showing interest in feeding sheep at Welshpool, where Sion Eilir and the team have been selling more than 2,000 head each week through the autumn.

“Ewes are probably a slightly better gamble given its dependence on the ethnic trade in the UK, rather than Brexit, which nobody can guess,” Mr Eilir said.

Improved Welsh Mountain ewes had topped at about £70 and had averaged £55 in recent weeks, and smaller hill ewes had levelled at £30-£35.