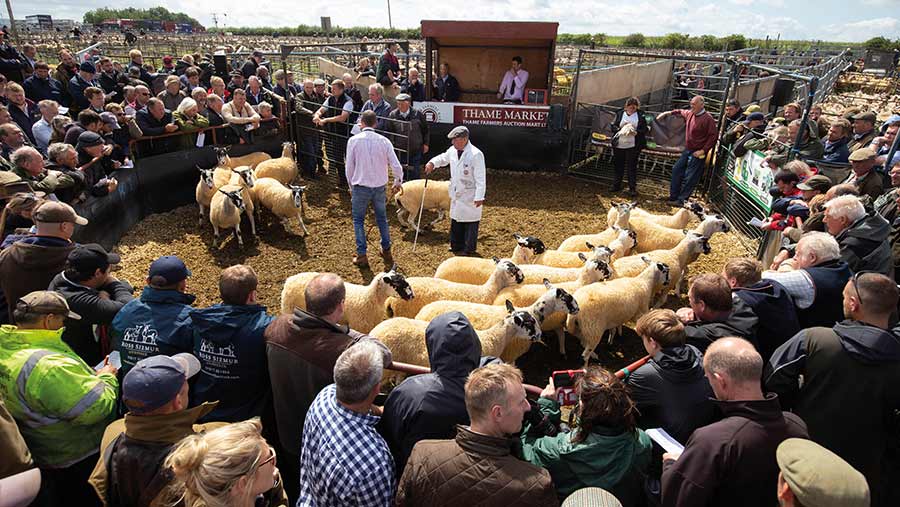 This was £33 dearer than last year’s sale, but auctioneer Simon Draper said the entry included more lambed sheep, which pulled the averages back on the day.

“Powerful sheep made a powerful price,” Mr Draper told Farmers Weekly. “While the average says £171, like-for-like those buyers looking for strong sheep that had been run dry were having to give £200-£202.

“What was perhaps remarkable was a price of £250 for four-tooths or “double theaves” – trade for older sheep was very strong.”

Mr Draper said demand had swung back in favour of sheep with maternal ability to enable more straightforward lambings. This was reflected in the averages for the terminal sire crosses.

“The Mules sold for £150 or more and there was a bigger difference between the top and bottom end of the sheep. Last year the range was £70; this year it was about £110.”

Some buyers went home with half the amount they wanted, said Greg MacDougall of Bentham Auction Mart, who sold the Mules and store lambs on Friday 6 August.

Looking ahead to the Mule gimmer lamb sales in the north of England, he said buyers may have to pay another £10-£15 a head.

Mr MacDougall said the fact that people were unable to secure what they needed suggested there should be demand at future sales, adding that farmers, rather than dealers, seemed to be the ones with the winning bids.

“It’s difficult to predict, but you would expect prices for the gimmer lambs to lift,” said Mr MacDougall. “Having said that, though, Thame might have been the dearest trade of the year. Sometimes the money runs out before the sheep.”

He said store lamb prices at Thame were £5-£10 dearer than at any other sales that had taken place in the North.

Even the very smallest, long-keep “strangely bred” store lambs were at £60 a head or more, and long-keep Texel-crosses for selling in the new year and spring were £80-£82 a head, he added.