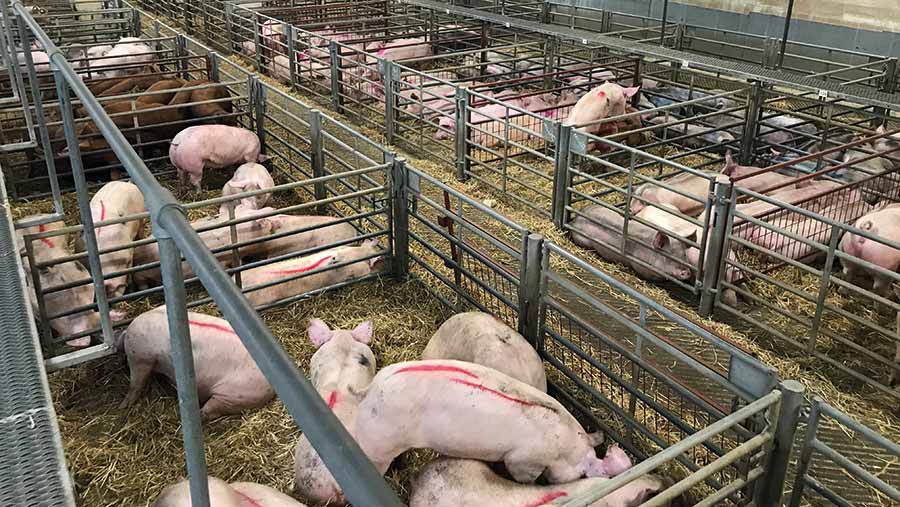 Some pig farms have quickly gone from having to roll over 25-30% of their finished pigs each week to being told by processors they are short of contracted pigs.

The usual tightening of supply early in the year and a legacy of lower production due to autumn infertility have helped work through a backlog of pigs.

This has brought some relief to a sector in crisis.

Prime pig carcass weights and fat depths are falling, suggesting pigs are being slaughtered in a timelier fashion and exporters are in control of paperwork for shipments to Europe.

This is welcome news after a perfect storm of limited sow exports, processing backlogs caused by Covid-19 in the UK and EU, and depressed European prices due to German export bans over African swine fever.

Market Drayton’s pig section was spared the extreme lows because of a flying trade from farm shops and butchers during lockdown, said Ben Baggott of Barbers.

However, he stressed that cull boars had been as low as 1p/kg, meaning a 300kg boar was making £3.

Cull sows averaged more than 60p/kg on Monday (19 April), with many at 40p/kg a fortnight before that. This is much higher than the 20p/kg averages seen earlier this year.

“There are definitely farms that have gone out of pigs during this tough time,” said Mr Baggott. “Two or three have already finished and one is finishing the last pigs; the sows are already gone.”

But he said prices must be sustainable: an eye-watering £60 a head, seen on Monday for a pen of 17kg weaners, was too dear.

Finished pig trade has jumped £30-£40 a head at Frome in recent weeks, with heavy cutting pigs up to £130 and lighter pigs regularly hitting £100.

Auctioneer Will Wallis said: “It’s taken a bit of time to warm up, but trade is certainly a lot brighter. The hospitality trade is opening up again.

Mr Wallis added that buyers were hungry for sows again, with reports of some new potential export markets.