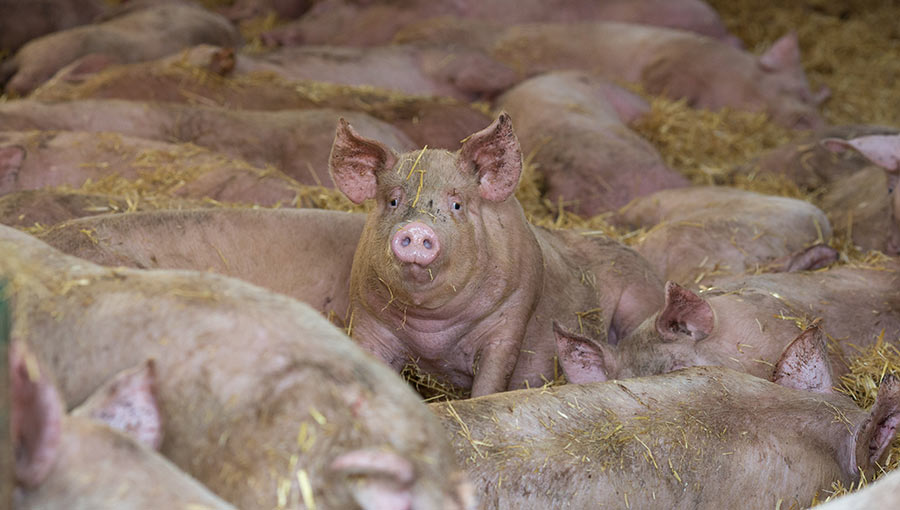 Feed and pig values have both moved in the wrong direction since the summer to pile pressure on pig farmers, with latest SPP (standard pig price) quotations at 137.5p/kg.

This leaves the SPP 10p/kg or more back on last year’s July highs and 5-6p/kg back on the year.

This has increased the pig-to-feed-wheat price ratio (feed wheat price as percentage of pig price) to 12-13%, compared with 8-9% back in 2017, according to AHDB Pork data.

Lacklustre demand, rather than oversupply, is thought to be stifling the market, wrote farm adviser, valuer and analyst Peter Crichton last week. He stated that an SPP of 137.5p/kg is ‘well below’ cost of production levels.

Finished prices for 100kg pigs are back £20 a head on July’s high prices at Frome, where Will Wallis, auctioneer for Symonds and Sampson, started fortnightly pig sales 18 months ago, selling to wholesalers, butchers and smaller farm shops.

Sales can see up to 150 to 200 head of pigs sold, of which one-third can be finished pigs, one-third stores and around 20 to 30 cull boars and sows.

Mr Wallis said that, with the higher costs of the winter, pig prices have been at breakeven.

He added: “Like the deadweight price, liveweight prices have fallen since October, but despite the declining deadweight SPP reports, live marts bucked the trend recently.”

He said a smaller entry saw prices recover somewhat last month (13 February), topping at £120 for finished pigs, but trade is still back £5 to £10 a head on last summer.

“Sow prices improved at the last sale but there’s huge uncertainty about this market after Brexit as so many sows get exported,” he told Farmers Weekly. “Another concern is African Swine Fever in mainland Europe and we have reminded people to be extra careful and vigilant in terms of herd biosecurity.”