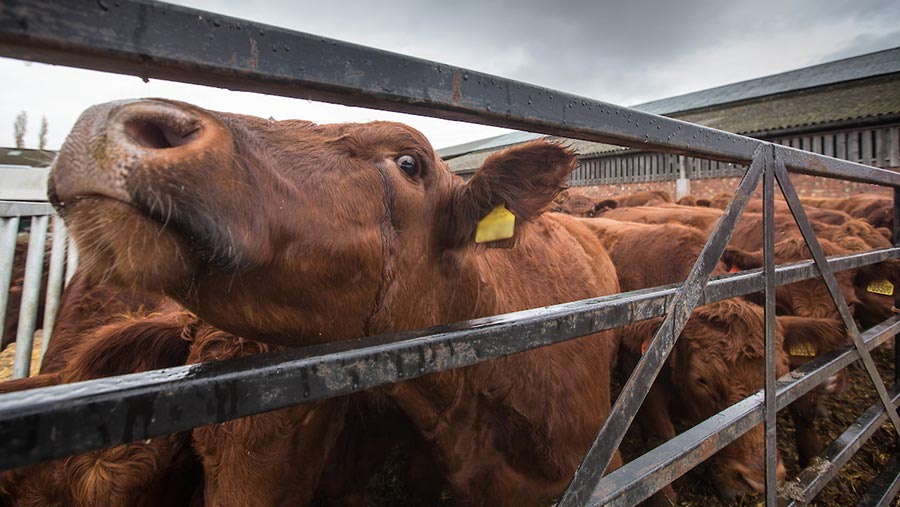 Prime beef prices remain £100 a head or more behind last year’s trade, despite a small lift in values in step with pre-Christmas demand.

Deadweight steers and heifers averaged 325.4p/kg in the last AHDB report (16 November), equating to a lift of 3p/kg since the start of November.

This equates to £10-11 a head. However, prime cattle finishers require much larger market gains to reach breakeven level.

Trade is firming at Market Drayton but bulls remain 20-25p/kg back on the highs of 18 months ago, says Bernie Hutchinson, managing director and prime cattle auctioneer at Barbers.

Well-bred animals with flesh and loin are currently selling well, he told Farmers Weekly, emphasising that it’s not just hind quarter shape but flesh along the top which was key.

Bulls are a mixed bag, with a significant number of the bulls being black and white, dairy-bred animals, which start at 80-100p/kg for P1 carcasses, he said.

Better fleshed animals (O+) have been making 145-155p/kg, while the better Blue-cross animals are at 160p/kg and above at times.

“Limousins are selling well,” he added. “Buyers want loin as well as shape and quality, over the last year or two this has definitely been a trend.”

Stronger demand from wholesalers has made for a slightly faster trade at Thirsk over the past three weeks, according to cattle auctioneer Tony Thompson.

“We have customers looking for cattle now,” said Mr Thompson, adding that a month to six weeks ago there was less interest.

He said demand was there for all sorts of cattle, although the best sellers were the 560-580kg heifers.

“A heifer at 600kg or more can still sell well but has to be outstanding,” he added.