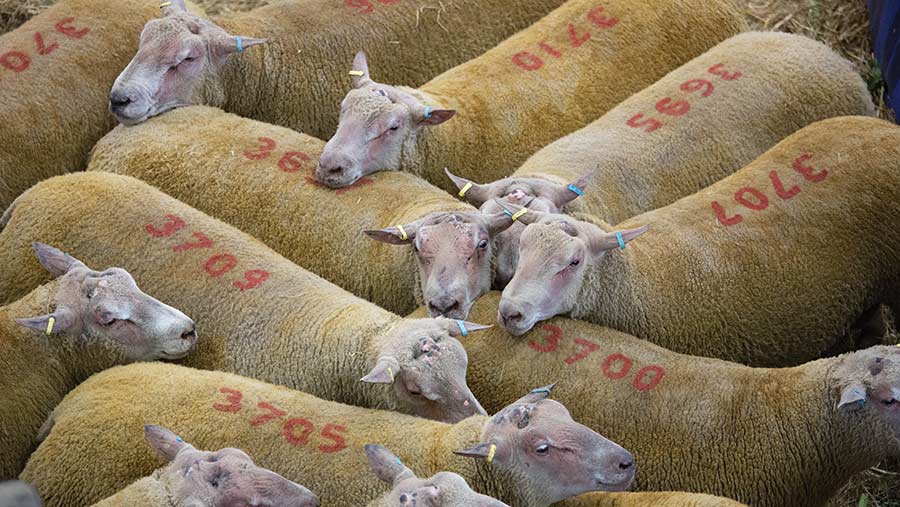 Commercial terminal sire trade has been difficult to call as unprecedented market conditions continue into the autumn.

With no Kelso ram sales – when more than 5,000 rams can be sold in one day – due to coronavirus, the industry has lost a key trade barometer.

Some Kelso replacement rings have seen averages up, a fast trade for the best rams, and values reflective of prime lambs being 40-50p/kg dearer on the year.

However, with more sires sold privately off farm and buyers having reservations about social distancing, some trades have been more difficult.

A change of location and the effects of coronavirus lockdown have challenged Hexham and Northern Marts, which sold Texel sheep at Lanark in conjunction with Lawrie and Symington.

And, given all the market disruption this year, he said both himself and the Border Texel Group were “hugely grateful” to Lawrie and Symington for hosting the sale.

Two solid sales have been reported at Longtown for Texels (7 September) and Charollais and crossbred rams (13 September), although Nick Woodmass said trade was difficult to call.

He said ram buyers had been very selective this year, adding that in some years when females were a strong trade, the rams did not quite meet expectations.

“Averages are up a little, but it’s difficult to compare to Kelso because so many people have sold tups at home this year. Some people have sold the better half already and taken bidders away from the ringside.”

Texels topped at £1,350 twice during the joint sale with Border Livestock Exchange, with strong commercial rams regularly at £700-£1,000 and an 89% clearance. Trade averaged £600.45, which was slightly up on the year.