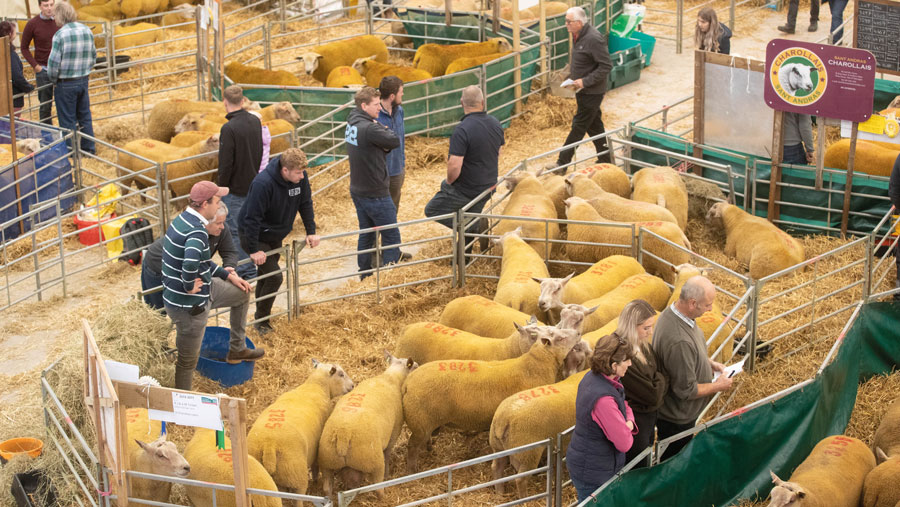 A remarkable year for prime lamb prices swelled averages to a record-breaking £694 at the NSA Main Sale of rams and females at Builth Wells on Monday (20 September).

There were fewer crossbred rams entered and traded. Terminal sire crossbreds were back 41%, with just 123 sold.

Although new records were set, there was a noticeable two-tier trade at times between the first- and second-quality commercial rams.

He added: “Lambs that had power and were harder bred that weren’t too pink in the ears regularly made 500-700gns for commercial flocks.”

The best commercial yearlings made 800-1,000gns, but there was a gulf between the second-choice rams at nearer 500-700gns, he added.

Mr Trumper said buyers were after rams to improve their flocks, rather than hunting for bargains. “Even if a ram was in a very good pen and was just lacking something, it was noticeable that buyers discounted them,” said Mr Trumper.

A tight supply of Suffolks made for a strong trade, underpinned by demand from pedigree breeders, prime lamb producers and breeders who sought a good ram for putting across Mules. “Clean headed sheep with good carcasses for putting onto Mules sold well,” Mr Trumper added.

Cefyn Price, Llanfair, Welshpool, topped the price list at 8,000gns with a Granite Untouchable son out of a homebred Kimbolton Venturer daughter.

Caereinion Dan Dare is a top 1% sire and caught the eye of WG Davies and Son, Hirwaun, Mid Glamorgan, to join their Cwmcynon flock.

A new North Country Cheviot sale record of 3,600gns was set in ring 19 as breeders sought strong Park-type rams with good bodies and tight skins. The previous record was 1,710gns.

Mr Jones said the bulk of the sheep were from Welsh breeders and flocks along the English border, although breeders from Devon and Cornwall, northern England and a Scottish flock were in attendance.

“There was a very good commercial trade for tups to put over Cheviot or Welsh ewes.

“Buyers were willing to pay up to 900gns for anything that stood out and lots of rams made 500-900gns. The breed has definitely gained popularity in recent years.”

+£217
How much dearer Bluefaced Leicester shearlings were compared to the 2019 sale, at an average of £790

85.38%
Total clearance across all breeds and rings, compared to 86% last year