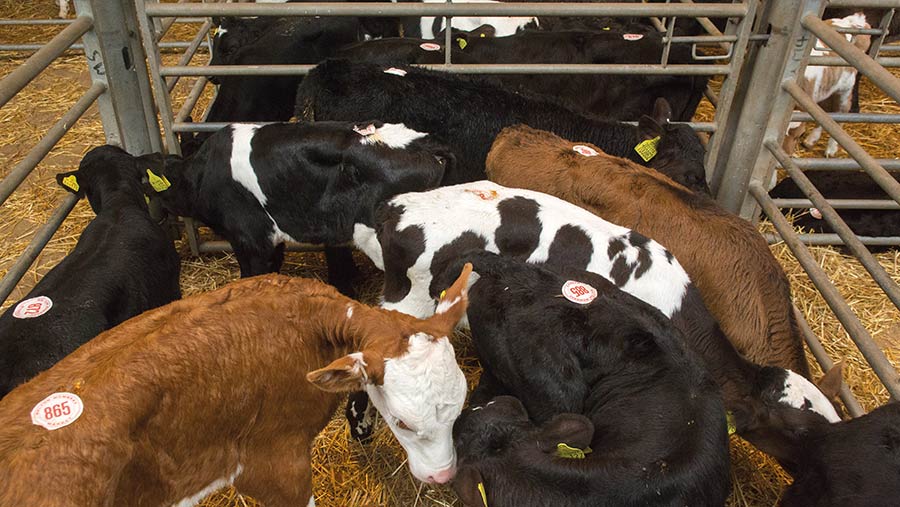 Stratospheric increases in milk powder and other feed costs mean rearing calf prices are failing to keep up with the finished beef trade.

Dairies and calf rearers are faced with coarse mix prices above £300/t and milk powder in excess of £2,600/t, after a 40-50% lift in the powder price since last summer.

Calf prices are on par with where they were at this time last year, but since then the deadweight steer average has lifted 30p/kg (8%) or so.

This has deterred some buyers, and left others looking for older calves, or younger ones for less money.

See also: Opinion: Inflation will be a big topic for farmers in 2022

Weekly entries of 500 or more in January are tipped to increase to 600-700 or more through the spring calving block, but Mr Cliffe said it was difficult to call trade through the peak period.

“Rearing calves are just slightly easier than last year,” he said. “Some people want to buy weaned calves as they avoid rearing costs. They can also sell that animal as a store sooner, which is better for cashflow.”

“January is normally good to sell calves, as farms get some in to rear before setting the lambing shed up for late February or March. However, this month has been hard work,” he said.

Some vendors have opted to sell calves younger at Gisburn amid rising costs, according to auctioneer Rachel Capstick of Gisburn Auction Marts.

More calves were being offered for sale at three to six weeks rather than two months or more, a trend seen since the summer, said Mrs Capstick.

As such, older, stronger calves were still commanding a premium. But some buyers liked younger calves as they could afford to buy more of them.

She stressed that vendors were benefiting from the time-saving “drop and go” trading, which was still realising a premium over farm-to-farm trade.

Entries had been strong in recent weeks. The first sale of the year totalled 361 head, and then 222 head and 149 head after the Christmas backlog was cleared.

Black and whites had been “volatile”, but strong, fleshy Friesians had raced past £100. Named-sire Angus bulls and heifers were very easy to sell, she added.