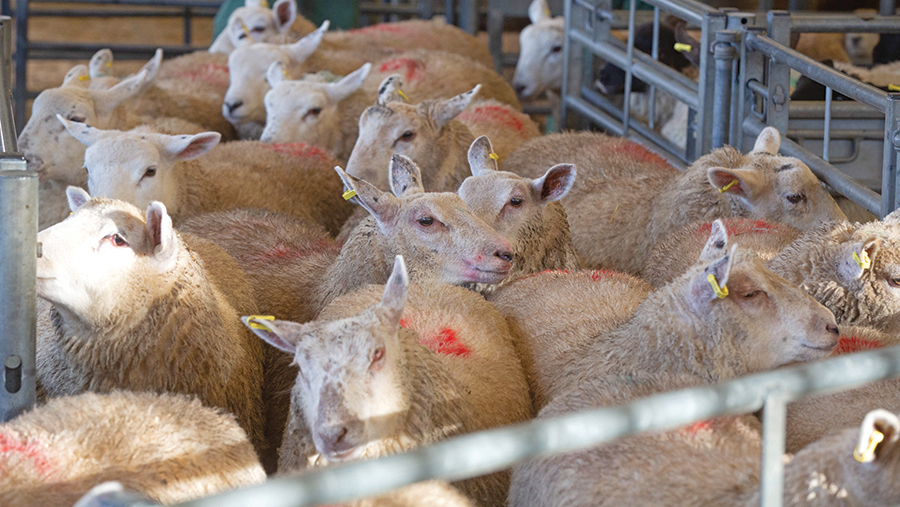 Lamb prices have climbed since Christmas to start the week at 211.3p/kg (6 January).

New Zealand lamb is typically 150p/kg below British lamb before export, but at the latest reckoning was at 445p/kg, ahead of UK deadweight averages, which ended 2019 at 439p/kg.

Prices at Bakewell were slightly ahead of the national average on Monday (6 January) due to tight supplies locally and a high-quality entry, which left an SQQ of 215.9p/kg.

“There were a few less about which helped trade,” Bagshaws sheep auctioneer Peter Oven told Farmers Weekly. “What also helped is the seasonal trend with it being after Christmas and people wanting lambs.”

He said the entry of mostly home-bred, corn-fed lambs had a lot of finish on them and sold well.

“Buyers are wanting to fill the system up again after the break and whether trade will hold into next week is anyone’s guess.”

He said that tight ewe numbers had made for a strong cull ewe trade, putting £30 on the meaty Texel and Mule ewes.

Lamb trade has also been strong at Welshpool, lifting 2p/kg on the week on Monday to sit at 208p/kg, lifting over £14 a head through the winter.

Auctioneer Jonathan Evans said the price had been building ever since the end of October once traders knew Brexit was postponed.

The price surge has prompted finishers to draw lambs early, which could mean tight supplies into the spring, he added.

“Anything from 34kg up is good to sell, and because trade is so good, I think we will be short of heavies going forward.

“Those finishing farms are dipping into lambs already because they can take in 200 lambs and average £100 a head. Normally it’s not until early March before we see big numbers of fed lambs.”

Cull ewes are also a flying trade, he added. “It’s a job to value cull sheep within £15 at the moment – sheep have scanned well, which has tightened numbers.”