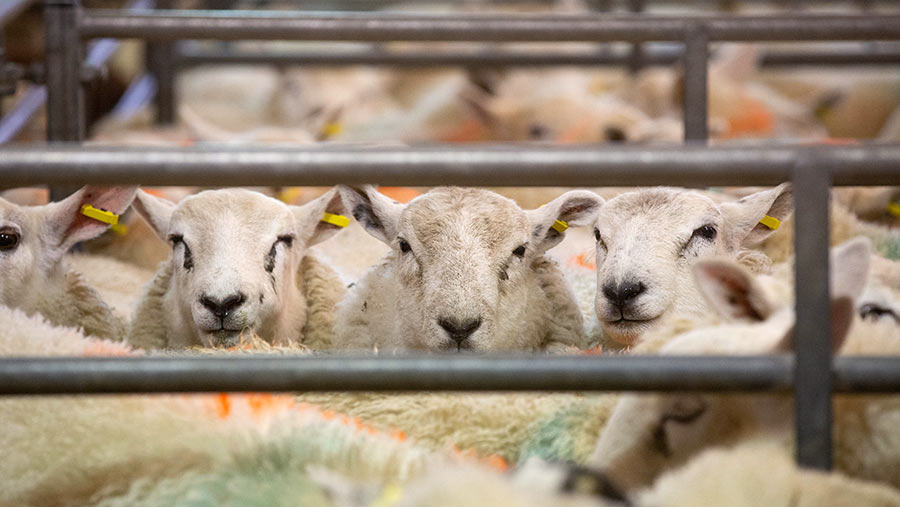 Hogg finishers and early lambers sold into a rising market last week to capitalise on stronger lamb prices, which auctioneers say could hold through April.

Strong export demand made 38-42kg lambs easy to sell, with prices 20p/kg above the national average for Monday.

Of these, 1,189 (48%) were over 45.5kg, and auctioneer and market manager Tom Wrench highlighted there was shortage of lighter and medium-weight lambs.

He said the best export lambs were making the equivalent of 490p/kg on a deadweight basis and many were achieving 482p/kg.

He added that Asian buyers had switched back to buying ewes, because light lambs were dear on a p/kg basis.

“There’s a shortage of export-weight hoggs and the lambs for the Asian home demand,” he told Farmers Weekly, adding that an 18kg carcass was considered ‘massive’ for the Asian market.

“Export lambs are probably going to continue to be a good trade now Brexit confusion has been extended for another few months.”

Light spring lambs were easily sold at Hereford last week (10 April) and will continue to be for the next few weeks, predicted auctioneer Greg Christopher.

“I think 37-47kg hoggs will see a lift in the build-up to Ramadan towards the end of April,” Mr Christopher told Farmers Weekly. “It’s amazing how many spring lambs are weighing 40kg and more already.”

He said the £100-a-head mark was being passed when selling the best hoggs.