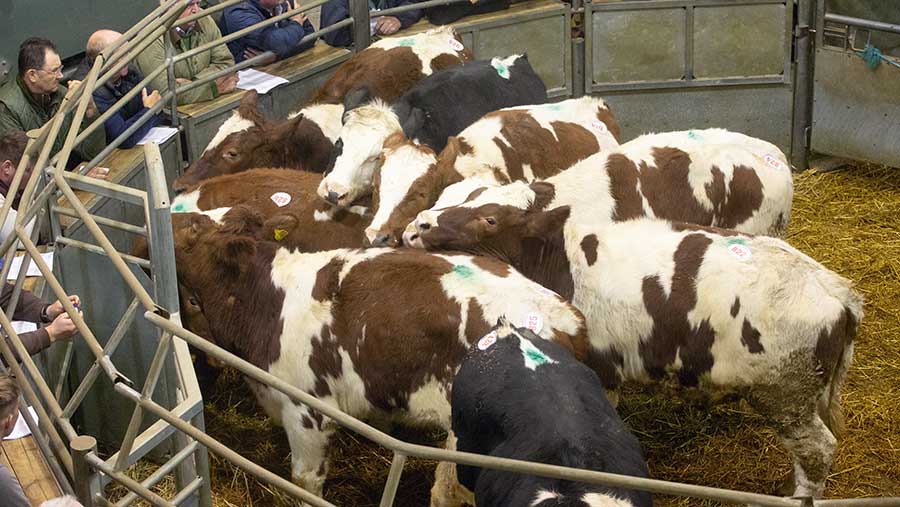 Struggling finished beef prices have led to a mixed store cattle trade this spring, with short-keep stores hit the hardest.

Prices for yearlings and grazing types remain mostly firm but finishing cattle have been plagued by the 7p/kg drop in this year’s average Great British deadweight values.

Deadweight averages to start March were at 344p/kg. Steers are back 11.6p/kg on the year and heifers back 15p/kg.

Analysts say processor chillers are deliberately full ahead of Brexit and this has weakened demand for finished cattle and created backlogs over the past few months.

With feed costs higher and cattle worth less, finishers are up to £100 a head back on the year, which is understandably affecting forward store trade.

See also: How to stop dirty cattle going to slaughter – and why it matters

Trade is back 15p/kg on the year across all types of store cattle at Stirling United Auctions this spring, but cattle are slightly heavier.

Mr Roberts said that the bigger, forward cattle were taking a hit because of the struggling beef price and that caution was notable around the ring.

Large forward stores are back £70-£100 a head on the year at Salisbury, but the best grazing cattle and longer-term dairy crosses are as good a trade as last year.

This is according to auctioneer Ian Tanner, who is seeing slightly more cattle yarded since Shaftesbury mart closed and is selling in excess of 300-head each Tuesday.

“Anything outwintered that meat can be hung on is selling well,” says Mr Tanner. “Second-choice cattle that are non-assured, small for age or out of specification can be £100 back on the year.”