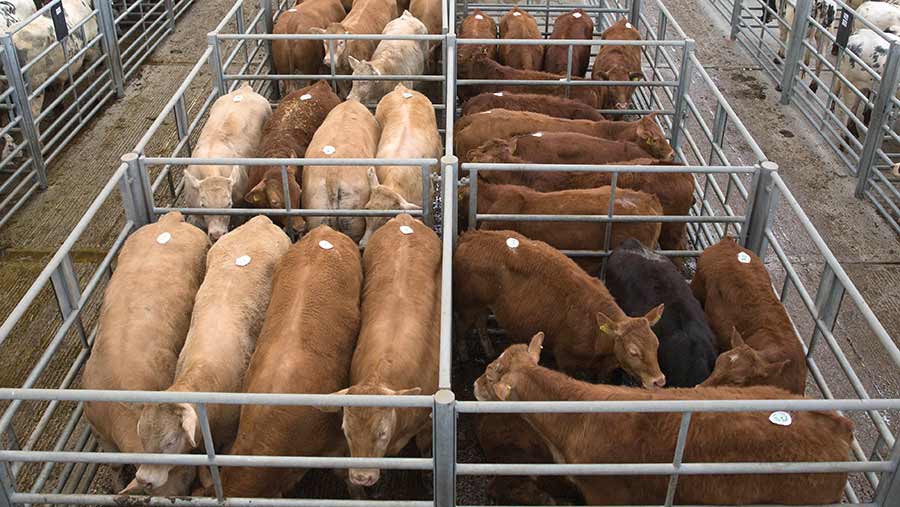 Beef prices have come under major pressure in July, although auctioneers state that the biggest losses are being felt in the deadweight market.

Great Britain’s live mart steer average was back 10p/kg last week at 195p/kg compared with mid-June, with bulls at the lowest point for almost a year at 180.16p/kg.

Deadweight prices led the decrease, with some down 10-12p/kg deadweight or more since June.

Analysts and processors say the usual seasonal drop in trade is more pronounced this year as stifling heat drives consumers away from red meat and roasting cuts, leaving leaner, dairy-bred carcasses in greater demand than top grade cattle in some cases.

Further downward pressure could lie ahead as families focus their budgets on trips out and holidays through August and, if the drought continues, more cattle are offloaded on to the market.

Prices were back 5p/kg on the week at Northallerton on Tuesday (24 July) and 10p/kg back over the past three weeks due to slacker demand.

Mr Drew said he hoped that prices had now reached a level but stressed that the cattle finishers of Yorkshire were managing to keep quality high.

“Averages have slid but it’s purely a demand thing. Supply is fairly static really and there’s no issue with quality – we are lucky in our area to have a lot of good cereal grown and the farmers are generally very good at finishing cattle.”

He said Tuesday’s throughput of 95 bulls and 65 clean cattle was typical, with numbers around 150-180 head/week through the year.

Paul Gentry, cattle auctioneer at Newark Livestock Market, is advising farmers to ensure cattle are well fleshed and finished as quality stock are still receiving good prices and have been spared the deadweight drop.

The report for Wednesday (17 July) stated that a “fair few lean bulls would have stood more time” and that leaner cattle were hard work to sell.

“Properly finished cattle of all breeds are still a strong trade,” Mr Gentry told Farmers Weekly, admitting that cull cows had lost 20-30p/kg at Newark during the drought.

Cull cows had been averaging above 160p/kg six weeks ago but now the advice for farmers and cow feeders is to hold on to cows and manage supply.

“Big companies have pulled the price back for these cattle because they can. A glut of cattle has been sent to slaughtering companies.”