There was a steady trade for Charolais at the Northern Ireland Charolais Club sale held in Dungannon on Friday (3 March), where the 33 bulls topped at 4,900gns.

The 16-month-old Derryharney Lumberjack is sired by the 22,000gns Newhouse Bigal and out of the home-bred Derryharney Daffodil. He was purchased by David McIlwaine, Newtownstewart, County Tyrone. 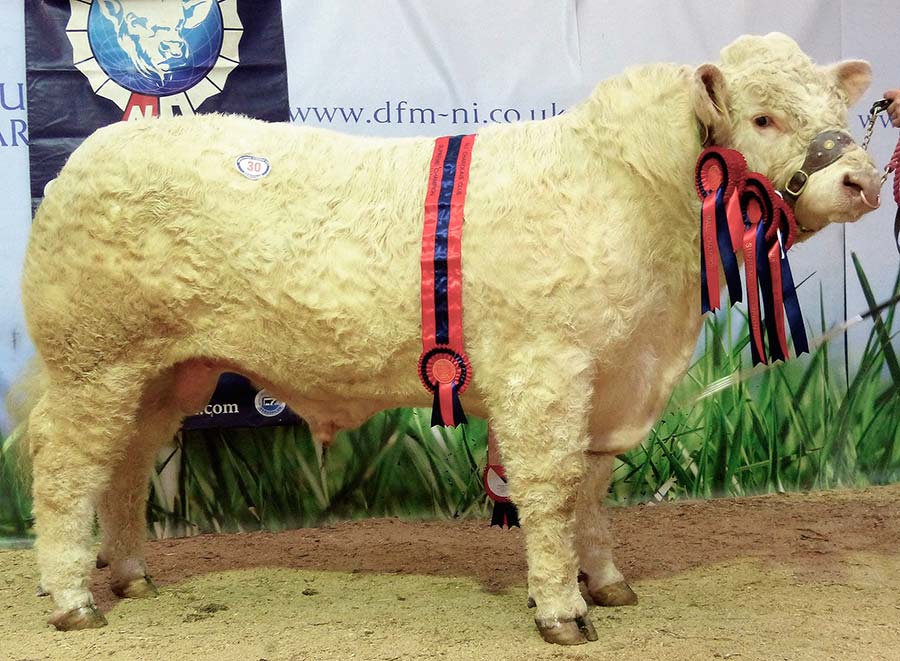 The reserve supreme, Drumlone Landmark, was next in the bidding stakes at 4,300gns. The breeding here includes the 25,000gns Stirling intermediate champion Inverlochy Ferdie and the Oldstone Egbert-sired dam Drumlone Edwina.

Two bulls were knocked down at 4,000gns. The first was the reserve supreme champion, Hillview Limitededition from Brian Quinn, Dungannon, County Tyrone. He was purchased by ED Sherrard, Belfast.

The August 2015-born Limitedediton is out of the Dungannon female champion Ballyreagh Eilsa and is sired by Inverlochy Ferdie.

Marcus Smyth, Coleraine, County Derry, was another buyer to bid to 4,000gns, this time for Woodpark Leroy ET, a 16-month-old son of the 30,000gns Dingle Hofmeister from Will Short, Omagh, County Tyrone.

Leading the bids for the females at 3,500gns was Battleford Lady from Bartley Finnegan, Dungannon, County Tyrone.

The June 2015-born Lady is sired by the 70,000gns Royal Welsh supreme champion Barnsford Ferny and out of the Scottish-bred Balbithan Vespasian daughter Blelack Cerise. She was knocked down to Kenny Preston, Omagh, County Tyrone.