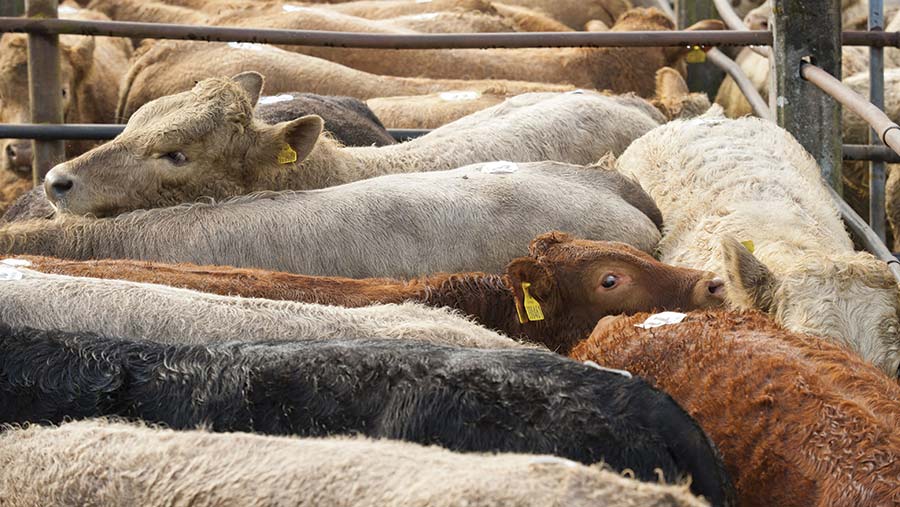 The usual spring lift in store cattle trade has been restrained by falling deadweight beef prices, forcing finishers to buy to stricter budgets.

There is a bleaker picture on the deadweight front, where processors have cut beef prices since lockdown, taking 12.1p/kg off an average R4L carcass in April.

Store cattle trade is “within a pinch” of last year’s values at Leek’s fortnightly sales, where auctioneer Mark Elliot and the team sold 196 steers at £744 and 204 heifers at £729 last weekend (2 May).

The best of the young suckler-bred cattle hit £1,000 at just under 14 months of age.

“The very best young cattle are just as dear if not dearer than last year,” said Mr Elliot. “Longer-keep buyers are putting them out to grass now. They are splashing out and going for it.”

He stressed that short-keep cattle were being discounted due to recent deadweight price drops.

The biggest store cattle entry of the season so far reported a steady trade across the board at Thainstone last week (1 May), despite only half the buyers present due to lockdown restrictions.

Social distancing restrictions meant only 58 buyers could be present, which was about half of last year’s attendance. About 100 cattle were sold via online bidding.

John Angus, head of livestock at Aberdeen and Northern Marts, said: “That was our fifth sale under restrictions and trade has held up pretty well.

“The cull cows are a flying trade, which is where the trade is. It’s mostly for processing beef, while the prime cattle are not coming into enough money in the meantime.”

He said 60% of the entry was 10-13 months old and mostly wholly suckler-bred and Limousin, Simmental or Charolais-sired.