A record 370 entries, 52 young stockmanship contestants and 130 trade stands were reported at the 2018 UK Dairy Expo, Borderway, Carlisle, at the weekend (Saturday 10 March).

The event was hailed as the best show New Zealand judge Selwyn Desmond had attended. 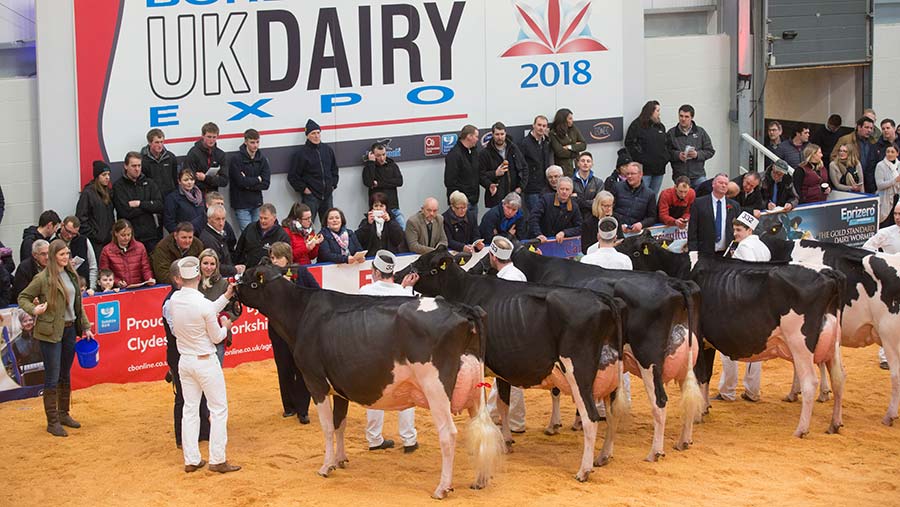 It was an old favourite, Peak Goldwyn Rhapsody (Ex97), that stole the show, sealing a hat-trick of Dairy Expo championships and interbreed titles for Derbyshire breeder Yasmin Bradbury and the East Sterndale team. 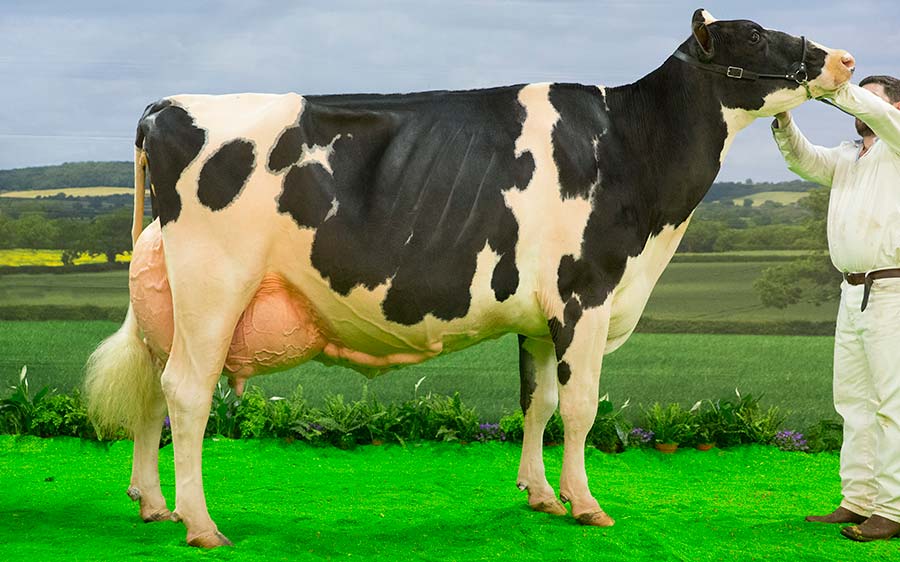 Known affectionately as “The Tank”, the red ticket winner also took the production class title and the overall Holstein championship.

The October 2007-born showstopper is by Braedale Goldwyn, also boasting Shottle in her dam line. She calved in October and is giving 55 litres daily.

The Tank also famously took the crown at Agriscot in 2014 and has produced more than 111,000kg in her life, giving 16,337 litres in her fifth lactation.

In overall reserve was the Lochhead team with Kedar Rhapsody (VG89). The Kedar herd dominated the Brown Swiss ring with the best Brown Swiss cow Mr Donald said he had ever seen. 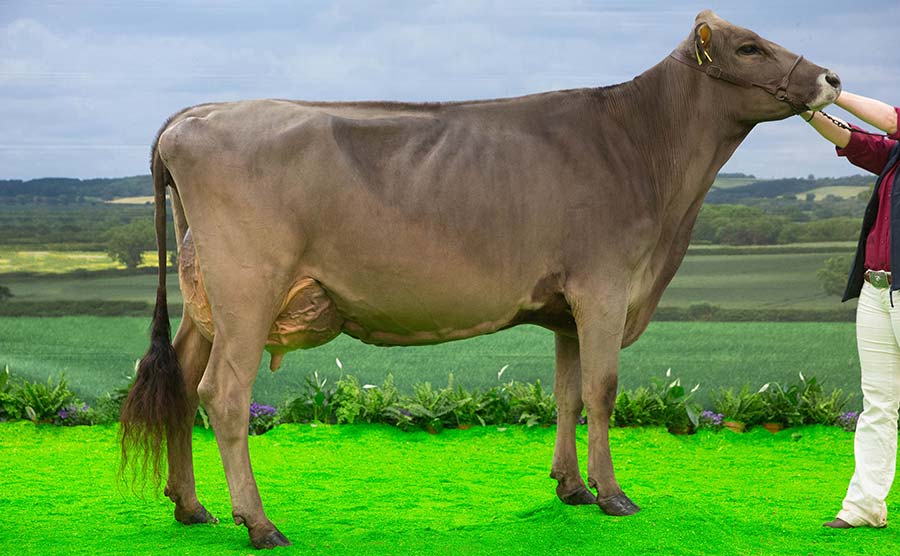 She followed in her mother’s footsteps by winning her third class at the expo. Rhapsody calved last month and is giving 45kg daily at 4.4% fat and 3.75% protein.

She last calved in October and is giving 55 litres a day back home. The home-bred cow is by Roylane Jordan.

Claiming the reserve title in the Brown Swiss ring and making it a clean sweep for the Lochhead team behind Kedar Rhapsody was sixth-calver Kedar Vigor Heike (Ex94). She is by the American sire Sunmade Vigor and out of Becks Heike (Ex93) and improved on last year’s second place.

Back home near Mouswald, Dumfries, she is part of a milking herd of 130 cows averaging 7,600 litres annually.

She calved in December and is giving 48kg daily. She gave more than 11,000kg in her last lactation back home in the 60-cow herd of Holsteins and 10 red-and-whites. 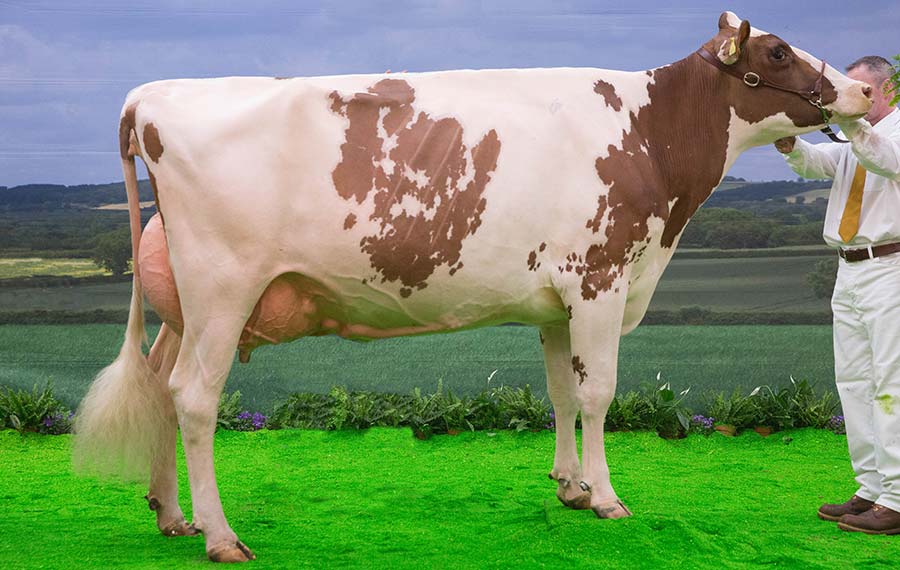 She is by Sandy Valley Chipper (+£342 PLI) and out of Holysprings Mighty Lawnrae, a West Port Arron Doon Mitey daughter. She has previously won at UK Dairy Day, Telford, and is being bred back in calf for a future outing at the European Show in Belgium.

Tapped out as reserve was the three-year-old Nethervalley Savard Emma (VG88) from R and M Scott, Ayrshire. She previously claimed the champion title at the Craigie show and came third at Agriscot. She is out of Lemington VC Emma and by Savard.

Another senior cow turned heads in the Jersey ring to take the Jersey championship. Fourcrosses Anthony Carroza (Ex90), bred and shown by Izzy Laird, Blyth Farms, Peebleshire, is out of Fourcrosses May Carroza and by herd bull Fourcrosses Allstar Anthony. 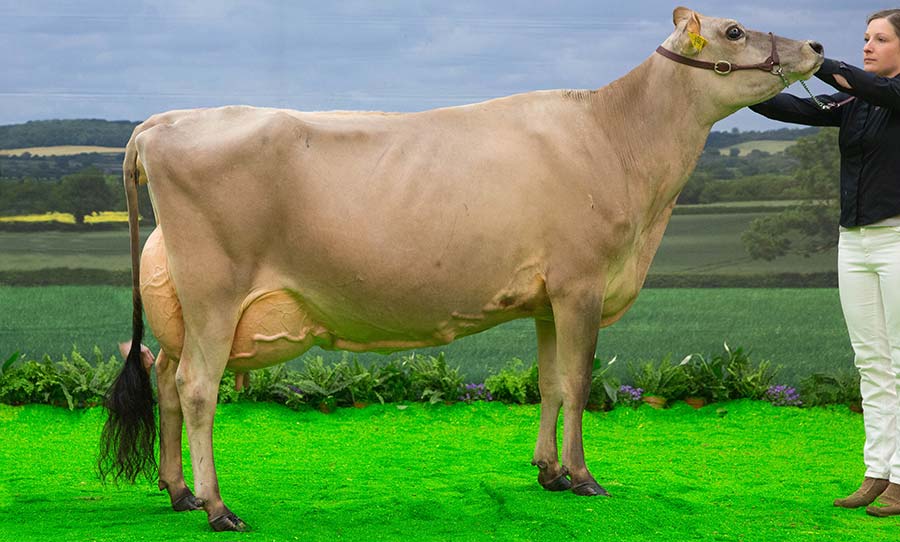 She calved in late December and is giving 42 litres a day and gave 9,617 litres in her second lactation.

In reserve was three-year-old champion Bluegrass Tequilas Blondette from AH Wilson and Son, Tregibby, Cardigan. This one is bred by B and J Daw and returned to do one better after claiming second place at Borderway last year.

She is giving 35 litres a day after calving in December and will head to the Celtic Showcase and Royal Welsh Show this summer.

Senior cow Changue Martha (Ex95) sealed her second UK Dairy Expo Championship in a row. She was shown by Mungo Bryson of the Whiteflat herd, Catrine, Ayrshire, and is bred by Robert Stephenson and Son. 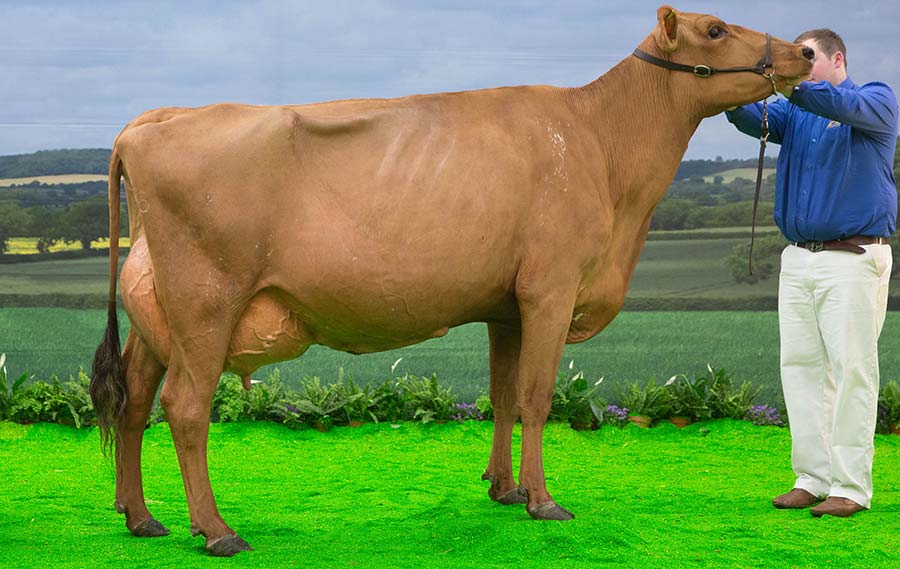 She won the 2017 Royal Highland Show and won the reserve title at Ayr. She is giving 43kg daily after calving in November. A Changue Stadium daughter, she gave 11,000 litres in her last lactation.

Halmyre Urr Louise 283 took the reserve rosette for the Davidsons, Castle Douglas. Another impressive senior cow, she is by Palmyra Tri-Star Burdette.

Winning the grand champion silverware was the Oakalby herd, Suffolk, with Quadrant Cathy 50 (VG87), which also won best udder in the Friesian category. Shown by Robert Ives, she is from ES Burroughs and Son. 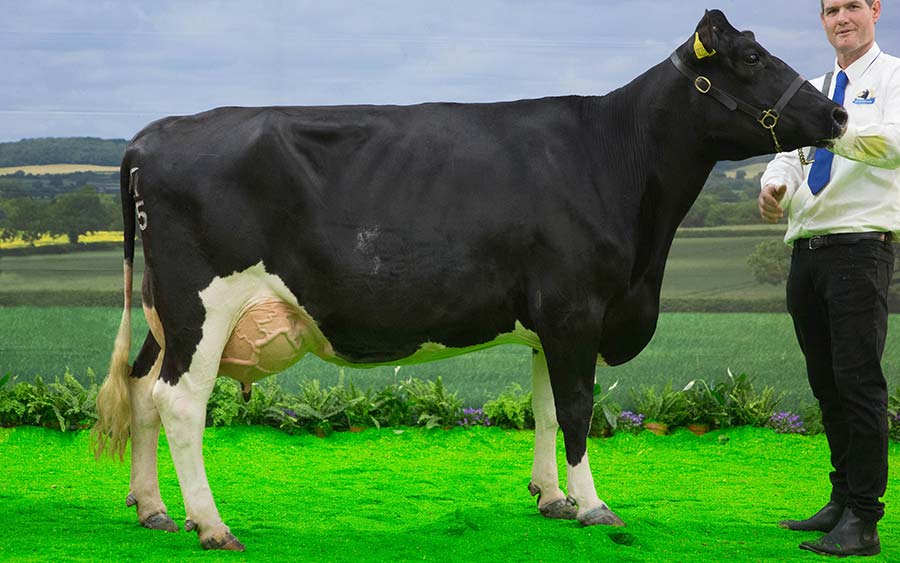 The Deansgate Quadrant daughter is out of Windermere Cathy and giving 37 litres daily after calving on 30 September.

In reserve was the “graceful” third calver Lismulligan Priscilla 48 from Ian and Gillian Blamire, Thursby, Carlisle. Bred by B Lawson and Sons, Priscilla is giving 42 litres daily after calving in November. 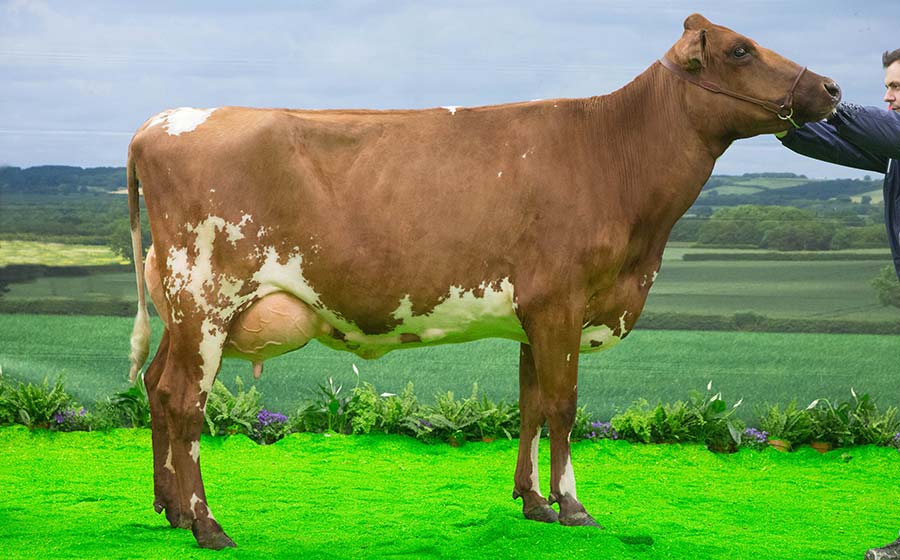 Her sire is Nejay Royalty and she is giving 49 litres daily after producing her third calf six weeks ago. She earned second place tickets at the Yorkshire and Northumberland show last year.

Last year’s champion, Shaunlea Geri 6 from Shaun Dixon and Grace Holliday, Wolsingham, County Durham, was tapped out in reserve. The three-year-old is out of Strickley Geri and by Hylite Barbwire Red.