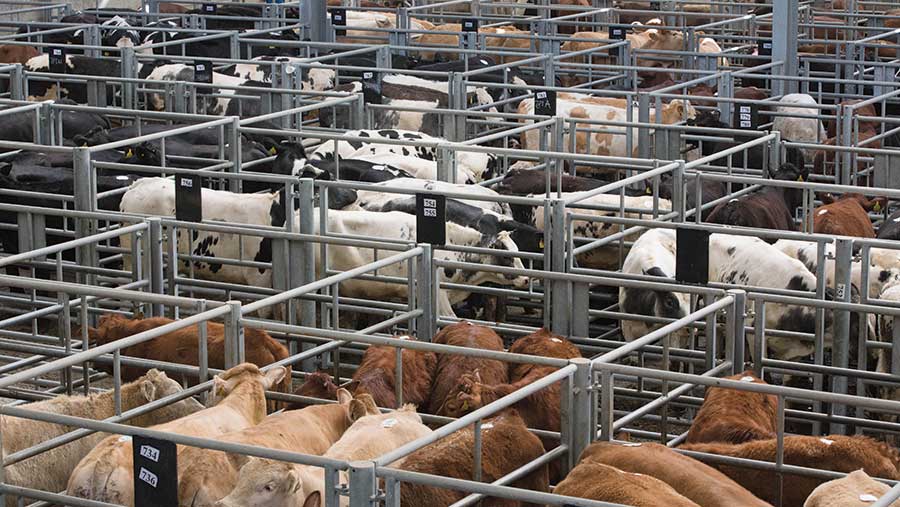 Store cattle supplies have tightened across Europe, further strengthening prime beef values into 2018 in the face of strong demand for manufacturing beef demand.

Great British cull cows have topped this year so far at a deadweight average of 260.3p/kg on 21 April, coming back slightly into May to 258p/kg, up 17p/kg on the year.

Mr Ashworth said: “With BCMS data showing a fall in the number of 12- to 18-month old cattle on GB holdings at the turn of the year, there is little likelihood of increased slaughter stock numbers in the medium term.”

Irish cattle are 4% dearer on the year, while across Europe, one-year-old cattle numbers were back 1.6% in December and two-year-olds back 0.7%.

Analysts still point to a weak pound helping UK exports, with a euro worth about 88p. Meanwhile, the markets wait to see if a typical seasonal summer price lift is felt.

Supplies are looking tight around the Selby area, where cattle prices have been consistently firm in 2018, according to auctioneer Richard Haigh.

He told Farmers Weekly he has been managing to keep numbers up, but with trade strong, there has been an incentive for finishers to sell.

“Going through the summer we will probably see supplies a bit tighter, but feeders seem to keeping numbers up reasonably well, which will have been difficult this spring because store cattle have been a good price. Once we get into later summer and harvest time, prime cattle are typically harder to find anyway.”

Numbers are “about on par” at Market Drayton, where Bernie Hutchinson of Barbers Auctions is seeing in the region of 100 bulls and 100-120 clean cattle every Wednesday.

Trade has strengthened 5-10p/kg on the month, and has been strong this year generally, with a large proportion of dairy-bred cattle coming from the region. Steers and heifers have regularly averaged 200p/kg or more, with stronger, beef-bred animals at 240-250p/kg, Mr Hutchinson told Farmers Weekly.

He said supplies of cattle looked to be tight on finishing units in his area, adding that good prices have encourage strong cattle to be sold. However, the late spring has slowed down the progress of the grass-fed cattle.

“Heavier stores have been slaughtered already in some cases and there may not be enough cattle coming through,” said Mr Hutchinson. “In terms of grass cattle, they need a bit longer. Turnout was late, but there is suddenly an abundance of grass now.

“I think trade should hold pretty firm or see a slight increase.”