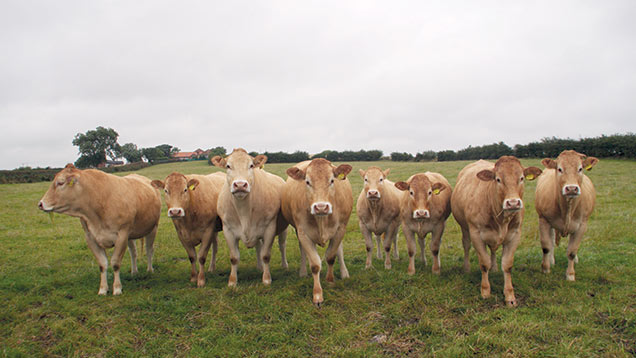 Beef farmers thinking about creep feeding calves need to work out whether it is cost-effective.

Independent nutritionist James Hadwin of New Breed UK says the aim of creep feeding is to maximise feed conversion efficiency and minimise stress at weaning and to complement, rather than replace, grazed grass.

“Calves will convert feed at a ratio of 4:1, while the figure for an animal close to finishing is about 8:1, says Mr Hadwin. “However, creep feeding may not always be cost-effective, unless the producer wants to push growth rates to meet specific market requirements.

“Creep feed is appropriate for entire bulls, for example, as they are expected to be finished at 12-14 months. But investing in creep for heifers that will spend a summer at grass and finish closer to 24 months might not be financially worthwhile; a lot will depend on grass quality,” he adds.

Heifer calves intended as replacements need to achieve 65% of mature weight at bulling, to calve at two years. Average growth rates should be set at about 0.8kg/day. This will require a high protein creep, as too much starch can lead to animals laying down fat, rather than frame.

Calves will continue to feed off their dams, irrespective of whether they are offered a concentrate alternative. Access to creep will reduce calf grass intakes, so grass availability, quality and use need to be considered, as well as cow condition.

Calves on permanent pasture will usually require additional feeding, as ME and protein levels may be lower, compared with short-term leys. Poor-quality creep should not be viewed as a substitute for good-quality grass, adds Mr Hadwin.

Mr Hadwin says producers who intend to creep feed youngstock at grass should introduce the ration ad-lib from two to three weeks of age, especially when grass is likely to be in short supply and cow condition is a concern. This will allow the rumen time to adjust to the new regime.

The starter ration should be highly palatable, with protein at 18-20% and a source of digestible fibre, such as sugar beet or soya hulls, to slow digestion.

“Soya is expensive, but it is a particularly valuable protein source for young animals,” says Mr Hadwin.

“It has high digestible undegradable protein (DUP), so protein is broken down in the small intestine, rather than the developing rumen, with energy directed towards growth.

“Starter feeds are only necessary for the first three weeks, after which protein can go down to 14%. Any higher and calves will simply excrete the excess and their dung will become loose. Both diets should have an ME of about 12-12.5,” he says.

Compounds and blends work equally well, but they must be consistent, and energy sources, including barley, should not be over-processed, to minimise the risk of acidosis. For the same reason, creep should not be allowed to run out, to avoid gorging, says Mr Hadwin.

He recommends regular weighing, to confirm the ration is producing a return on investment. Creep feeder design is mostly a matter of personal choice; the main priorities are to keep equipment clean and move it at intervals, to prevent poaching.

The best bull calves and most surplus heifers are sold for breeding, while those deemed unsuitable are finished at home. Bulls are taken to 16-18 months and heifers to 24 months.

Intakes gradually increase to about 3kg/head/day, by the time they reach four to five months old. Levels dip slightly at turnout, due to fresh grass availability and a boost in cow milk production. By weaning time, the bull calves are eating up to 6kg/day, says Mr Weightman.

Mr Weightman says: “Our autumn-born calves are weaned at nine to 10 months old. They are brought inside in August and remain housed for a couple of weeks, to let them settle down.

“The cows are kept in for a day or two and fed mainly on straw, to help with drying off and stop them trying to get back to their calves,” explains Mr Weightman, who works alongside his father Peter.

“The bulls stay in the buildings, where they continue on the same ration, fed twice a day. The heifers go back outside and are fed approximately 2kg/head/day up to the housing period, which usually starts in late October.”