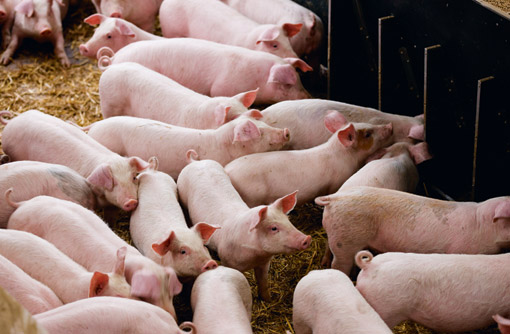 Scrimping on the quality of post-weaning pig diets to save costs may be a false economy and could mean producers are missing out on a saving equivalent to £266/t in feed costs.

All pig producers are under immense pressure to reduce input costs, but the focus should be on highlighting specific stages of growth where savings can be made, according to Steve Jagger, pig nutritionist for ABN.

And he believes the two weeks post-weaning is not the time to be trying to be too economical.

“We have had phone calls from farmers looking to reduce the time pigs are fed high-specification diets at four to six weeks of age, but this is a false economy at this crucial stage,” he says.

One trial showed that piglets eating 4.55kg each of starter feed post-weaning were worth £1.21 more a pig as margin over feed, compared to piglets eating just 3.89kg each.

This is a saving equal to £266/t of overall feed costs, because the pigs’ feed conversion efficiency, growth rate and value at slaughter were improved, without intakes of grower feed having to increase significantly in the later stages.

Trial work carried out by ABN also showed the late finisher stage was an area where many producers could make considerable savings.

“Many farmers tend to feed one diet from the 40kg stage, but the protein requirements from 80kg is a lot lower, so many producers are feeding too much at the end,” Dr Jagger says.

“Consider whether it is worthwhile investing in bulk bins and a feed delivery system to feed two diets to finishers.”

Dr Jagger says feeding two rations at this stage could bring a £1 a pig benefit. And with many farmers selling 500 pigs a week, this could equate to an extra £2,000 a month.

Dr Jagger also emphasises the importance of feeding for achieved performance, citing the 40-70kg stage as the main stage where pigs are often fed a higher specification diet than is necessary.

“Before reaching 40kg, pigs have greater feed conversion efficiency (FCE) and respond well to the diet. But after this their FCE reduces,” he says.

Computer models can be used to interpret on-farm data and identify areas for improved efficiency.

For example, weight, growth rate, feed conversion efficiency and fat depth information can be used to understand the shape of growth of your pigs and allow changes to system management.