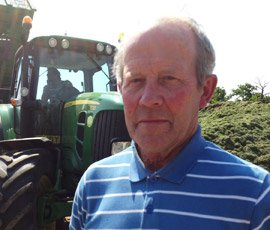 First silage cuts were delayed after recent extreme weather, but quality of early cuts looks promising, according to some farmers.

First cuts are three weeks later than normal on some farms following continuing bad weather since last autumn, including the coldest spring for 50 years. But despite the late start many farmers have made steady progress ensiling the first cuts of their silage crops this week.

A set of Claas triple mowers run on a John Deere tractor was used for the bulk of the mowing, with a Claas 960 forage harvester used for the remainder. Five tractors and trailers are available for carting the grass.

“The grass started to grow two to three weeks late this year,” said Mr Emery. “It has caught up now and the actual quality has been very good.

“Some of it is not such heavy cuts, especially on the older leys. But the newer reseeds have performed quite well really.”

After a wet season, Mr Emery was expecting boggy conditions, but the ground dried up “remarkably well”.

The newer ryegrass leys appeared to be yielding best this year, compared to the older, more established leys, which were a “lighter cut”.

Mr Emery, who also farms a 200-cow dairy unit, was cautiously optimistic about harvest prospects for the rest of the season.

“The maize is in and coming up, so as long as this warm weather continues we could get a decent maize cut after a very disastrous 2012.”