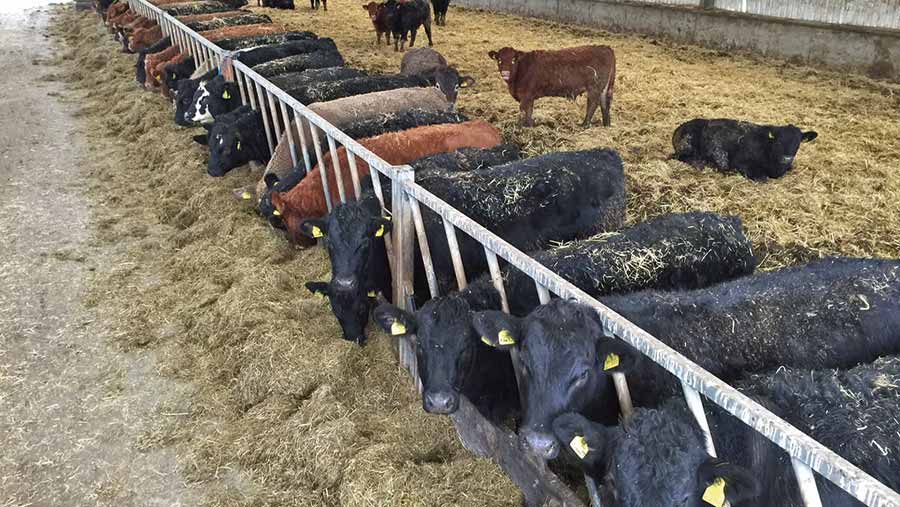 Unsurprisingly, the family that run Shearwell Data, one of the major UK players in the tag and software world, are keen on using technology to drive efficiencies throughout the farm.

This allows them to multi-task as they all work across their beef and sheep farm and the data business.

With restrictions on building opportunities, due to being located in Exmoor National Park, the Webber family have had to work with what they have and adapt rather than rebuild their sheds.

Richard, James and Sam gave us a tour… 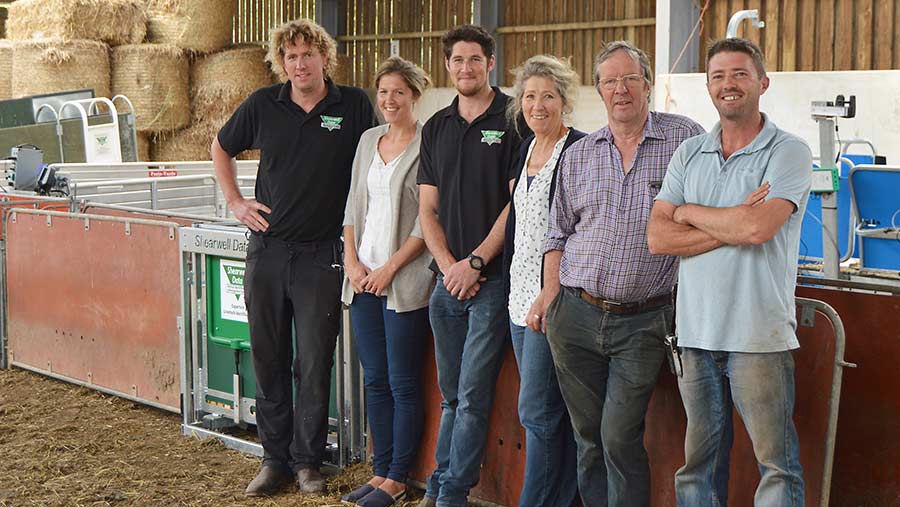 What has been the biggest recent project?

Richard We sold one farm and bought another a year ago and lambing now happens at that farm. We completely stripped out the lambing shed, which is 53 metres by 35, when we bought the farm.

We had to drill into the ground to create a clean feed face for the Keenan diet feeder, and to make a passage wide enough to drive down. That cost £1,200 to drill the holes.

All the water pipes were in the roof and they would freeze, so we completely redid the water system so that all lambing pens have a water supply.

It’s been a lot of work. We gutted everything apart from one run on the back wall, which we use to run sheep along to footbath.

Footrot is the biggest problem we have because of the weather, although we have reduced it by 50% through vaccination. 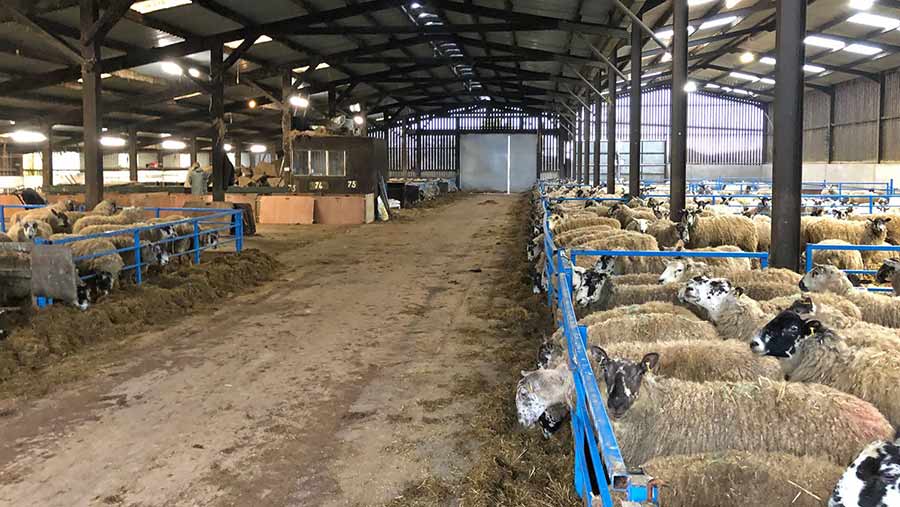 The lambing shed, with larger pens for 80 ewes and individual pens as well as a central hut used for equipment and recording © Sam Webber

Sam It makes it a lot easier because all the ewes are in one place, so there’s less need for the stock box and quad trailer. The ewes will be in bays of 80 and we can move a bay at a time.

James We can build the pens as needed with the lambing pen sides. The pen sides are solid plyboard walls to contain the ewe’s smell within her pen.

What is your favourite feature on the farm?

Sam The cattle handling system has helped massively with weekly weighing. We’re weighing 180 cattle at least every two weeks and the new system allows us to weigh 74 cattle in 11 minutes.

We’ve got a Te Pari Titan AL crush, which stands for air lever. There are three types – the manual, the hydrolic and the air lever – we went for the air for the drafting gates because we have three-way drafting.

We have fitted antennae to both sides of the crush, to pick up EID tags, and the information goes into a Shearwell recording system. 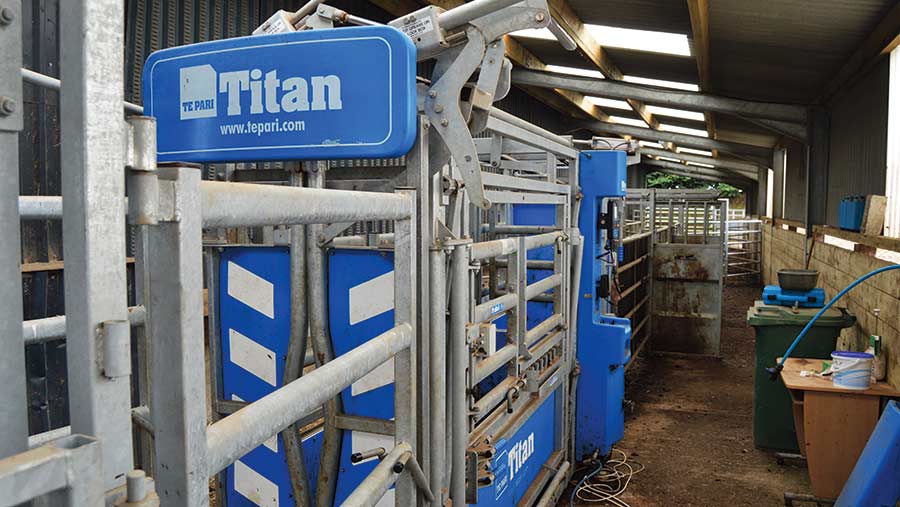 What has been the best buy?

Sam We have a Keenan MechFiber 380 feeder with InTouch technology. This has made feeding a lot easier. Before we had it, we were feeding bales, shear grab silage and chucking barley around.

Everything apart from finishing lambs is now on a total mixed ration (TMR) and we have separate rations for the calving cows, dry cows, fat stock and ewes.

Emma and I looked at the numbers the other day and two years ago, before TMR, the stores were averaging 0.7kg daily liveweight gain.

This year, it is 0.99kg a day. We have had to raise the roof in some of the sheds, but it is worth it to have a bigger feeder.

James Feeding and bedding with the straw chopper can now be done by one bloke by lunchtime, but if there are two of us, we can be done by 10 or 11am, whereas it used to take a lot longer.

What is the best invention on farm?

James The Jimny has got to be up there. The buggy we had before was costing us a lot each year in maintenance so we bought a 2008 Suzuki Jimny last autumn for £2,000 and adapted it, in total costing around £5,000.

Sam It’s great – it has heating, air con, radio. It’s got a rear-locking diff, we changed the wheels on it and the back box tips up. 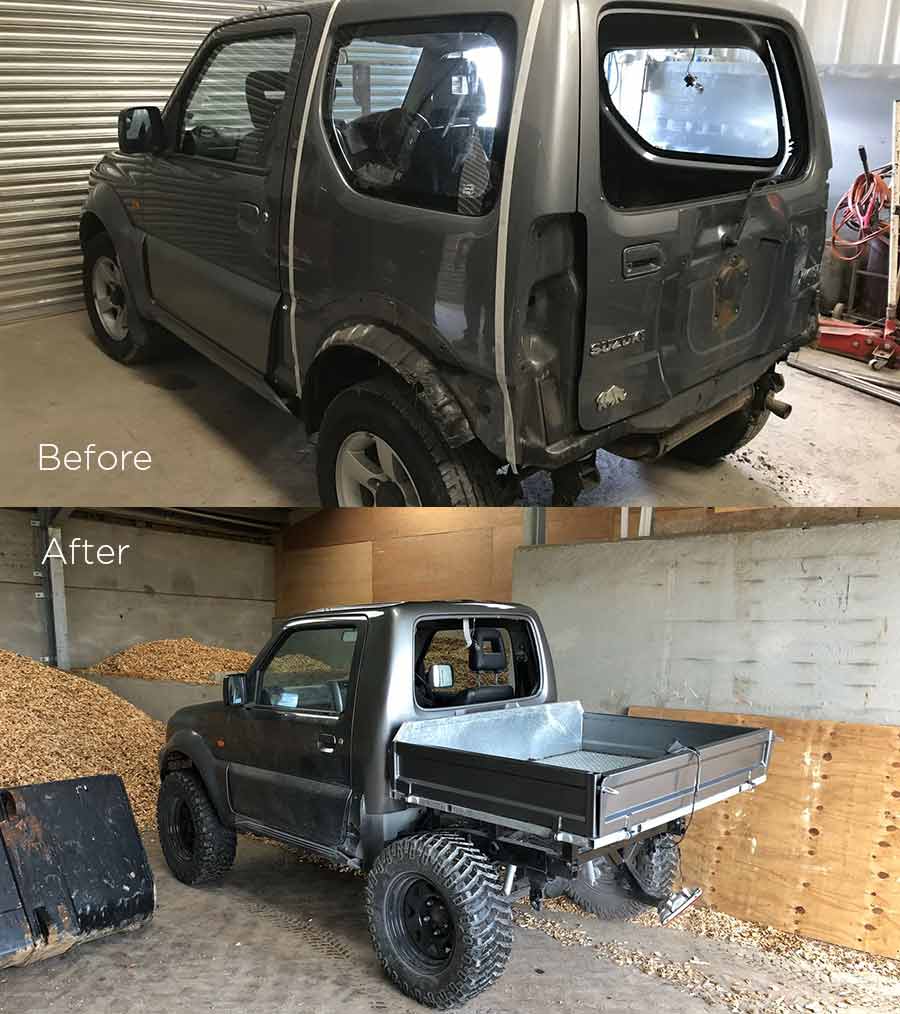 The Suzuki Jimny has replaced the old UTV

What has been a real bargain buy?

Richard The radios. Everybody has a radio because mobile phone signal is so bad around here. The system cost around £10,000, but it’s the best investment we’ve made in some years.

James They have a ‘man down’ feature, which sends an alarm if the radio is lying down for a certain amount of time. It can be annoying if you put your radio on the dashboard, but it’s good to have if you have someone working on their own.

How have your shed adaptations helped with labour?

Richard It’s as much about safety as labour-saving. In each of the calving sheds there are 10 calving pens, which are mainly 10ft. They have a self-locking yoke and gate, which can be used to steer cattle and can be adapted to allow for caesareans or calf suckling.

All the pens have a back door for safety, which is really important as people are often working alone. If you’ve got control of the animal, it makes all the difference.

All the pens have individual adjustable drinkers, so we don’t have to take buckets in. We try to design everything to be as easy as possible to use. 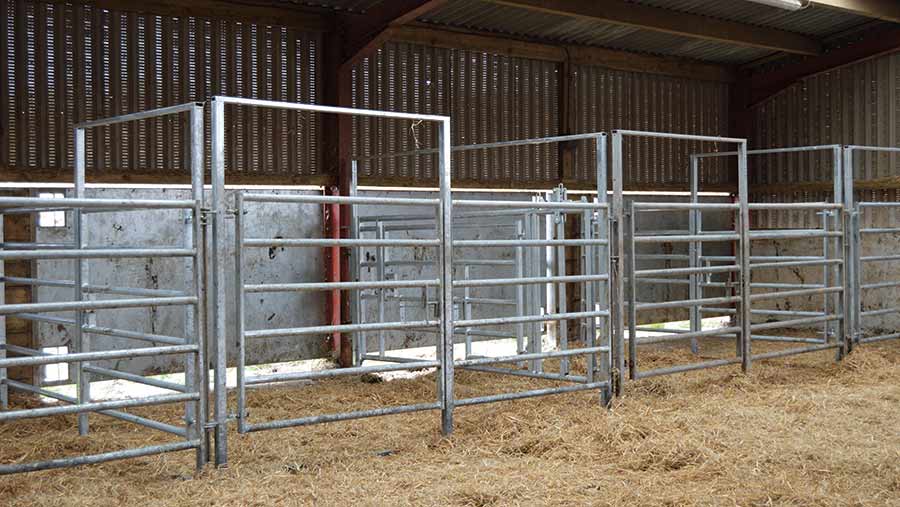 Sam The fat lambs on slats are fed through an automatic feeder. The Portequip feeder is piped into the bulk feed tank through an auger system and has a sensor which triggers a refill when the lamb creep feed falls to a certain level. 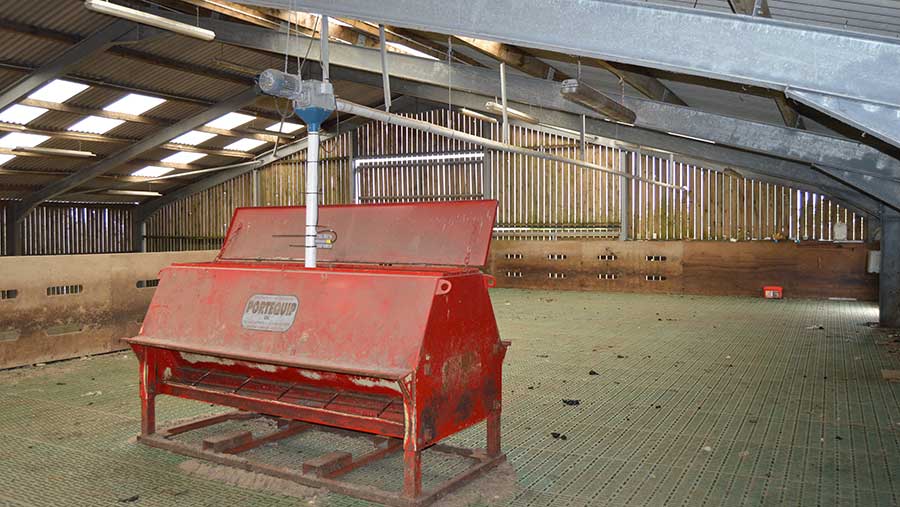 What other handy tools do you use in the lambing shed?

Richard The warming box has earned its keep. It’s powered by a fan, with four compartments – it’s actually big enough to put a calf in. You can use one end to keep milk warm and then you can put weak lambs in it to get them going.

James We have one whiteboard on the small hut in the middle of the lambing shed and we work a collar system.

Different colour collars are put through the hand hole on the pen sides – each colour means something different and the key is on the whiteboard.

For example, this year a green collar on the pen meant there was a weak lamb.

This makes it easy for people to know what’s going on because there are usually five or six of us around the shed, moving ewes and lambs.

The milk bar for the orphan lambs has helped save time feeding them too.

Richard We fit a temporary ramp in our sheep race to prevent backing up. Sheep run over it and jump down it, but can’t get back up it when reversing, so it keeps them flowing well. 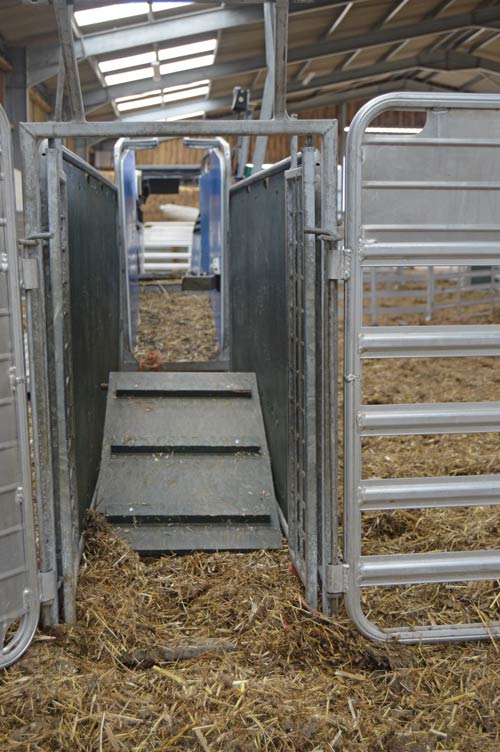 The ramp, which can be easily slotted in or out, prevents back-up in the race © Hayley Parrott

How do you use all the data you’re collecting in the sheds?

Sam When you’re weighing cattle in the new crush, you can see their current daily liveweight gain as well as three previous weights, so you can see instantly if one animal is going backwards or if they all are, they might need worming or something.

It’s a vet crush, so has a safe area at the back of the animal for AI or anything else.

Richard We can use the weight data to make instant decisions, so we can get shot of lambs if they’re fit or if they’re not doing well, so we don’t waste time feeding them or get price deductions for going overweight.

And I use the data to look at the financial performance of the whole flock, so I can see which ewes are making the most money. I ran a report on all the mule ewes we bought in and found that the top three all came from the same flock.

Sam We can also see which fields are producing the better daily liveweight gains and compare performance between groups. It might be because of red clover, for example.

Who does all the building work?

Sam Most of the building is done in-house. We built the pens for the lambing shed and the calving pens. We’re lucky that we can borrow labour from Shearwell.

And where do the design ideas come from?

James We design everything ourselves, mainly because of cost and lead time. A lot of the ideas come from overseas as we travel a lot, particularly to Australia and New Zealand.

Sam We’re investing in machinery so that we can do more with one person because we’re always dividing our time between the farm and Shearwell.

A feed-pushing robot is next on my list. We spend a lot of time when the sheep are in pushing up feed.

Unfortunately, I don’t think it’ll make it up the slopes in the yard, so it’ll be limited to certain buildings, but we can use it in the cattle sheds before the ewes come in.

It’s not cheap, but hopefully we will be able to get some grant funding on the next round to help with 40% of it.

And I want to get more cow brushes. The store cattle love the one in their shed – they didn’t know what to make of it when it first went in, but after two hours, they were queueing for it.

It gets the straw off their backs too and gives them a nice shine, which is good for market. See the cow brushes in action in this clip.

We could also do with a bigger tractor for foraging. We have a John Deere 6930 chipped to 200hp at the moment, but it struggles up the steep hills.

James He says that, but he’s always the one spending! 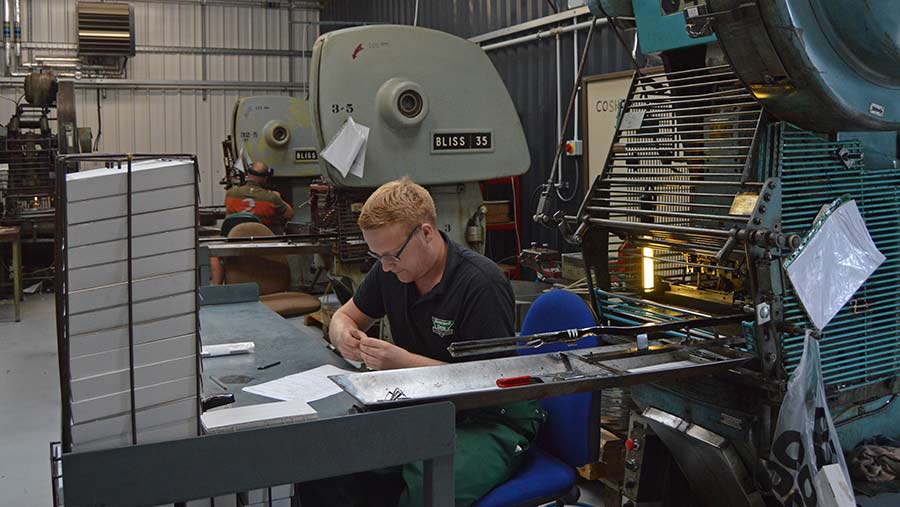