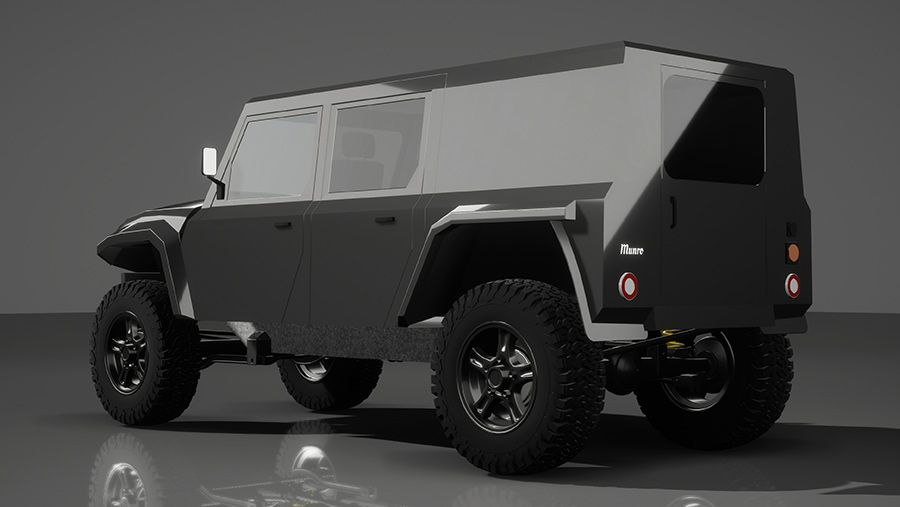 Farmers eager to ditch their diesel runaround for an electric alternative finally have the prospect of something that is sensibly priced and fit for work.

The Munro is being built by All Terrain All Electric (ATAE), a Scottish start-up concentrated on low-volume manufacturing of a proper battery-powered, ag-spec four-wheel drive.

The company was founded by Russ Peterson and Ross Anderson in 2019, and they have wasted no time in beginning production of their debut mk1 vehicle.

But rather than following convention in adapting a standard Land Rover Defender, the Munro is based on the galvanised chassis and body of Foers Engineering’s Ibex 4×4.

Opting to partner with Yorkshire-based Foers will avoid direct competition in an already-saturated Defender-centric market that includes conversions by the likes of Twisted and Electric Classic Cars, both of which charge more than £70,000, excluding the cost of the donor vehicle.

But by using the Ibex shell and combining it with refurbished Land Rover running gear and new electrical components, ATAE hopes to keep the purchase cost pretty close to £50,000.

This may decrease if interest is strong and parts can be purchased in bulk.

Assembly will take place at the company’s factory in Glasgow.

This includes slotting in a 300Nm drive motor and, for the prototype at least, a reconditioned version of Land Rover’s highly regarded LT230 two-speed transfer box with a locking central differential.

A 52kWh battery pack is fitted as standard and should be good for a 150-mile range, but buyers have the option of increasing capacity, either at the time of order or further down the line.

The Munro is also expected to offer the same 3.5t towing capacity and 1.5t payload as the Foers original, though this will only be useful for relatively short journeys – lugging power-sapping loads over long distances isn’t suited to battery power.

A DC rapid charger – the sort you’d find at motorway services – will fill the batteries from 20% to 80% in roughly 30mins.

A domestic AC charging unit will do the same top-up in five hours.

There is also plenty of scope to charge the Munro using solar or wind turbine installations, which will slash running costs compared with a diesel pickup.

Interior fitments are pretty flexible. The five-seat format includes space for a pallet in the rear cargo area and waterproofing of all the components means the whole lot can be hosed clean.

Those expecting to do a few more road miles can specify extras, such as a touchscreen with satnav.

ATAE expects to have its prototype finished by February, at which point it will begin trials and demonstrations.

Order books will open in the summer, with first deliveries slated for early 2022.

Given its modest sales aspirations, the company has no plans to establish a dealer network.

Instead, it will take orders online or over the phone and deal with demos, servicing and repairs directly. This should reduce overheads and keep the price down.