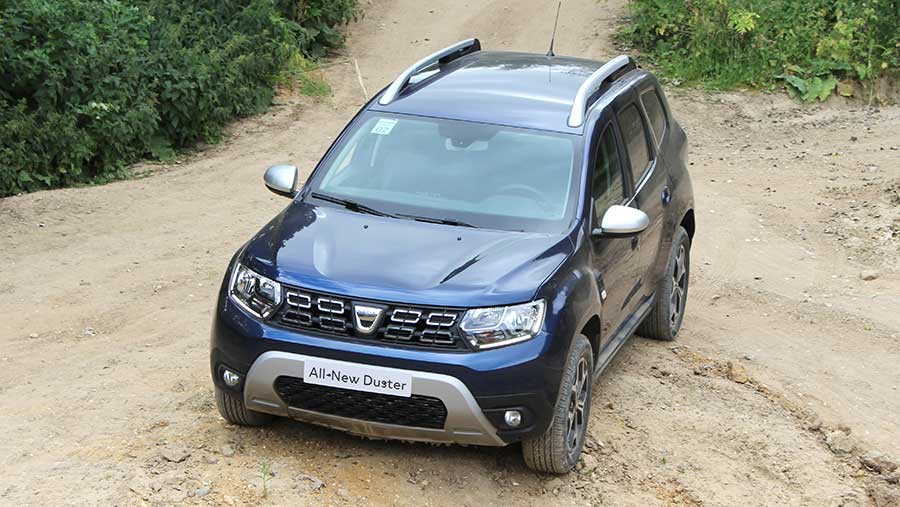 Having been the butt of jokes for years, unfashionable Dacia is now developing something of a cult following for its bog-basic, no-frills car.

A recent get-together of a UK Dacia fan club clocked up an impressive 800 attendees and the Romanian manufacturer claims to be shifting more than 8,000 units a year in Britain.

Such has been the appeal of the company’s biggest 4×4 – the Duster – that it has been taking Mercedes, BMWs and even a mid-1970s Bentley as trade-ins.

And Renault-owned Dacia has now unveiled a new model that it hopes will build on the progress of its predecessor, which notched up more than 1.1 million sales since 2010.

First impressions are that the Comfort-spec model has a fresh skin, thanks to new external panels, and new headlights that sweep into the front wings make it seem wider, too.

Our Desert Orange test car had the 1.6-litre SCe engine which we’re told kicks out 115hp. A light kerb weight of 1,179kg means it should have ample power, but we found it was a little lackadaisical in providing any serious propulsion with two burly chaps in the front seats.

Although the Duster isn’t known for mind-blowing speed, we had expected the 1.6-litre block to have a slightly better turn of pace – but it’ll most definitely be residing in the “loser lane” on motorways.

The engine gets pretty loud as the car winds up to a cruising speed of 70mph. There are undoubtedly more comfortable vehicles for long commutes, but it’s perfectly good for short jaunts on country roads.

The wing mirrors create a bit of unwanted wind noise at speed, although sound deadening has been improved across the whole car and a 0.35mm thicker windscreen means old-shape Duster owners should notice a marked improvement.

We’d probably go for the turbocharged (yes, turbocharged) diesel 1.4-litre four-pot, which had a bit more character than the slightly wimpy petrol offering. And with 260Nm of torque, it will certainly be more capable on towing duties.

The five-speed manual box is basic but works fine, although a hefty left-arm shove is needed to get the clunky stick through each gate.

We found the engine slow to drop when changing gears, which left the four-cylinder engine wildly revving away as we selected the next cog and contributed to a rather stressful experience.

As far as manuals go, we’d opt for the six-speed box if you plan to be on a motorway for any amount of time, but Dacia also offers an automatic option that might be a bit more chilled. 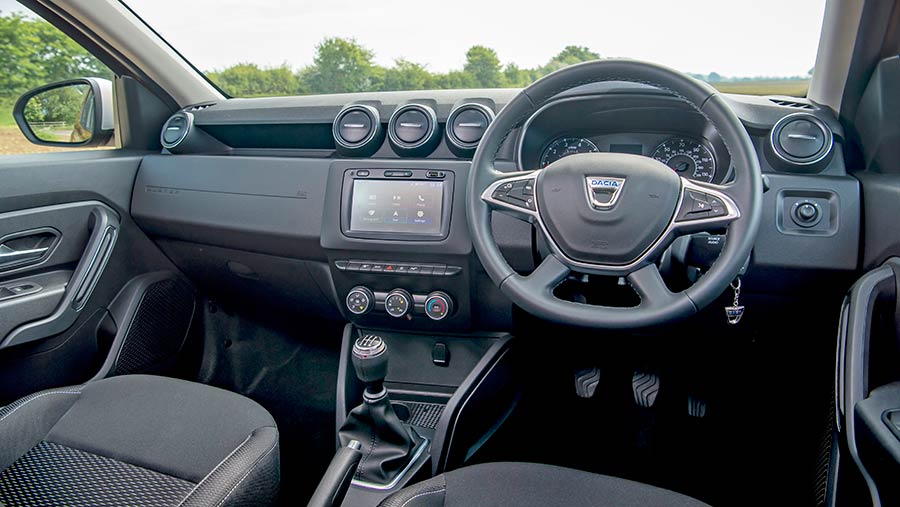 The Duster is a mishmash of many cars on the inside. The piano-button layout in the centre is similar to Audi’s smaller cars (no shame there, then), the air-con dials have a whiff of Nissan about them and the steering wheel volume controls are almost unmistakably from a 1990s Renault Clio.

The 7in touchscreen is surprisingly competent at its tasks – Bluetooth streaming and a rear camera are standard features in the Comfort option – although it also offers up a slightly annoying “bing” every time the car enters a speed limit change. 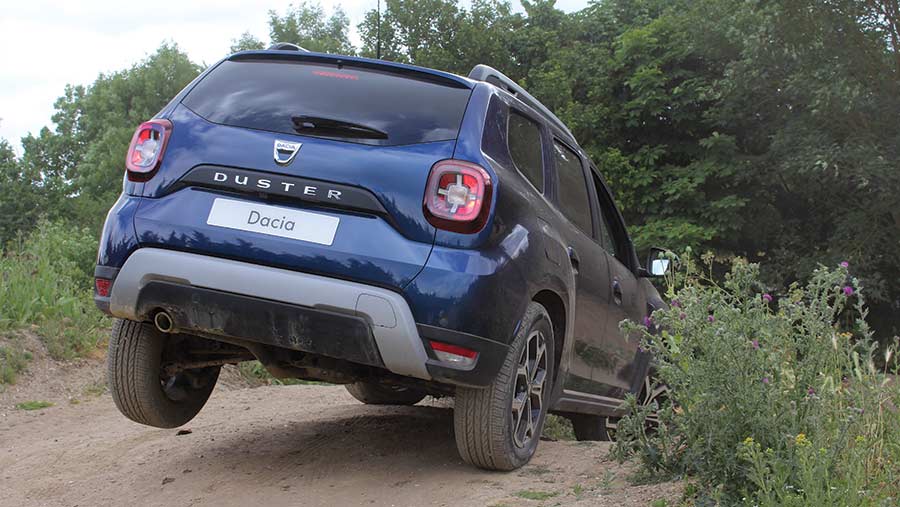 The front seats have been redesigned but taller drivers might find the seating position a bit uncomfortable for extended journeys. There is no place to rest your left foot when it’s not hoisted on to the rather loftily-positioned clutch pedal, either.

The top-spec Prestige gets keyless entry, multi-view cameras and a soft elbow rest on the door handle, which is a big improvement from the original Duster. In all, there are four spec levels – the other three are Essential, Comfort and Access – with varying trim levels, and only about 10 optional extras.

With Nissan X-trail running gear, the Duster has some decent off-road pedigree and its “hill hold” system is a particular highlight.

Modest approach and departure angles, along with a ground clearance of 210mm on the 4×4 version, limit any serious off-roading – as does the omission of a low-range transfer box. That said, the Duster is more than capable bombing up a farm track or across stubble fields and is far more comfortable than a UTV.

Hill descent control is useful, but it pauses for slightly too long before taking hold on slopes.

Although the Duster now has a lot more standard kit, it still remains a very cheap and cheerful vehicle that is perfectly suited to life as a low-mileage runabout.

With some of the most respectable depreciation figures on the market, it will still be viewed as very budget motor and it’ll take some beating in its price bracket.

However, we’d wait for either the diesel-powered 115hp 4×4 later this year, or the 130hp petrol engine due next year.