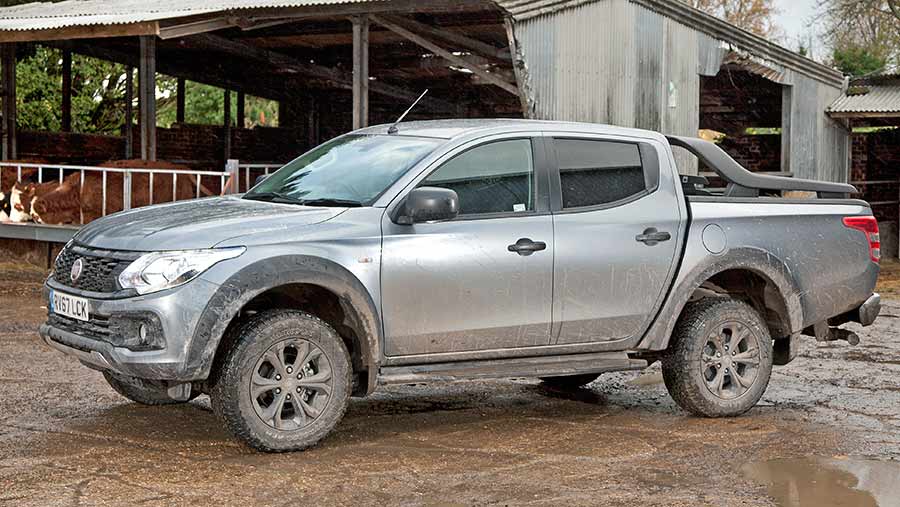 The past year saw a clutch of new models enter the ever-growing 4×4 pickup market. We put three of the newest arrivals through their paces – the Mercedes-Benz X250d, Fiat Fullback Cross and Ssangyong Musso Saracen.

Our test was carried out using a mixed-age group of testers and involved a series of controlled on- and off-road routes.

Below we look at how the Fiat Fullback Cross fared.

The farm-ready Fullback is at home bashing up and down rutted tracks and the interior has a more workaday feel – particularly when compared with the polished offerings of the Ssangyong and Mercedes.

Its L200 roots give it a solid and respected base, helped by good ground clearance and an aggressive approach angle that means it is very capable when climbing steep slopes and dealing with deep ruts.

However, for similar money to the L200, Fiat has removed luxuries such as leather elbow rests, which may sounds petty complaint but on longer trips to Lamma, you’ll notice the unrefinement.

This also extends to the engine and transmission, which feel much more at home on the farm than the tarmac.

Mitsubishi’s 2.4-litre four-potter powers the Fullback and has an unmistakably agricultural rattle. Churning out 180hp, it was the lowest powered of our test group but turned out to be surprisingly quick. This may have been helped by the fact that it was a good 300kg lighter than the other two. 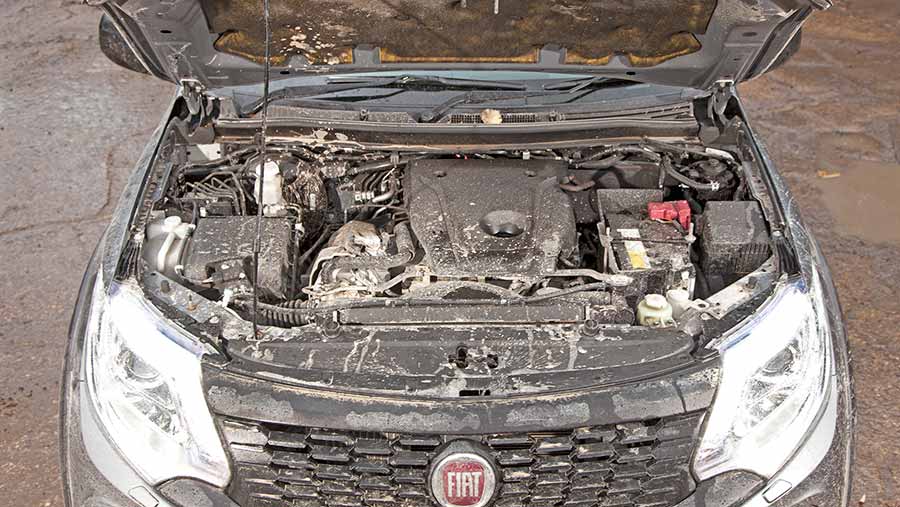 The five-speed auto box feels old alongside the higher-cogged rivals but, for day-to-day pootling on a farm, we think it holds up just fine.

However, on motorway jaunts, the transmission’s flaws are exposed and it sits a few hundred rpm higher than the sedate Ssangyong. That played out in the in-cab sound tests, where the Fullback was worst or equal worst at 30mph, 60mph and under acceleration.

Fiat hasn’t tampered too much with the L200’s basic design, so cab plastics are tough, long-lasting and perfectly suited to overall-clad drivers climbing in and out.

As a result, the interior doesn’t quite have the panache of the Merc, but most farming buyers will be perfectly content with substance over style. 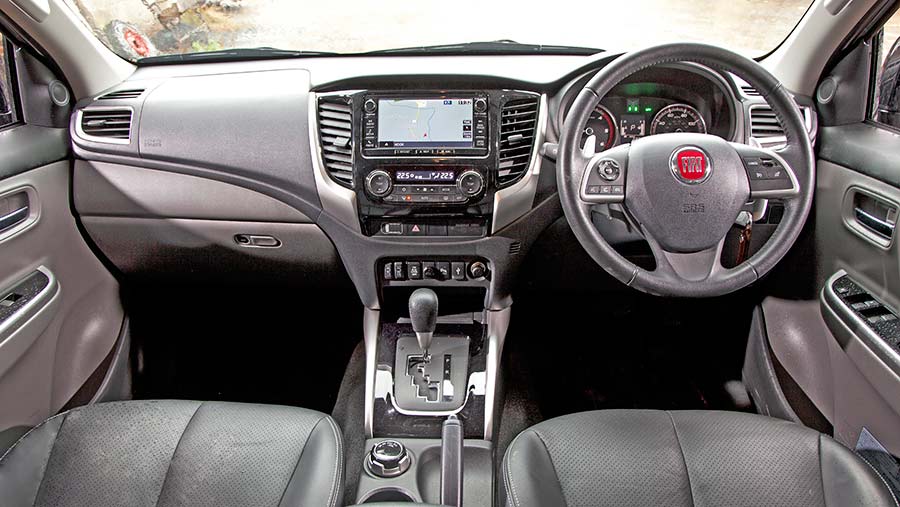 Downsides include climbing into the driver’s seat, which seemed a contortion act for our six-foot-plus photographer.

It can be a wriggle to get comfy on a long journey too – particularly as all armrests have been stripped of the cushioning found in the top-spec L200 – and things are little better for anyone in the back seats, where inhabitants will be squished with legs tucked around ears.

It comes with the usual handful of gizmos, including a lane departure warning safety feature that starts up every time you switch on the ignition. It may be useful for sleepy drivers, but can become tedious with its constant beeping off road. 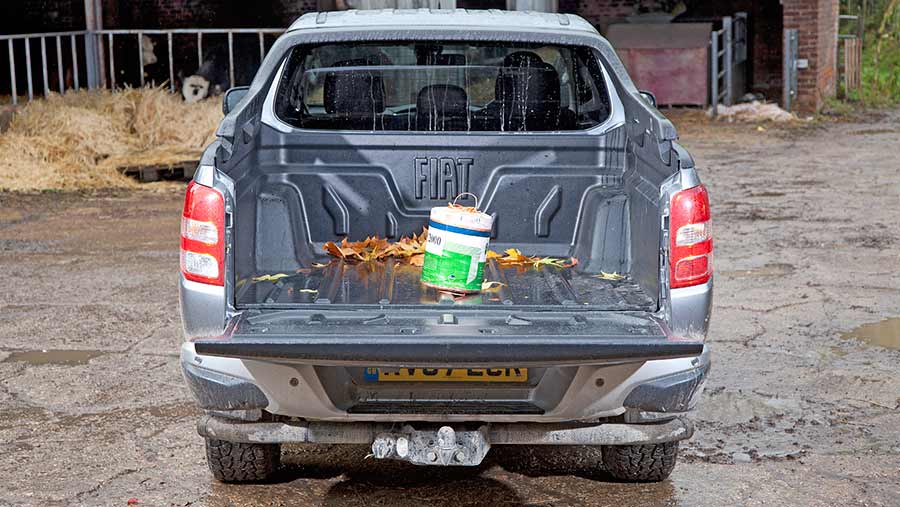 A cab screen is also part of the package, though we found it a bit small and cluttered compared with the cinema-grade setup in the Musso.

The high standard spec of the Fiat Cross includes bi-Xenon headlights and a reversing camera, but it probably pays to shop around, as for similar money, you could get the same toys and a badge that is established in the pickup world.

The Fullback gets a locking rear diff on the top-spec Cross models alongside the standard low-range gearbox.

Off-road is where the Fiat shines – it has the best ground clearance (bearing in mind Ssangyong takes its measurement from body, rather than axles) and the best approach angle. 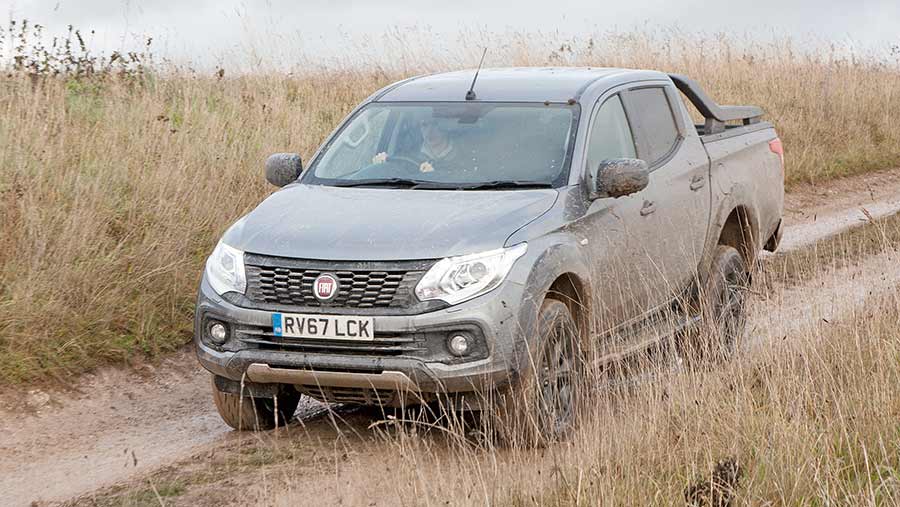 Its narrow frame and 11.8m turning circle make it pretty manoeuvrable too, though the huge rear overhang hinders departure angle. During general driving it can feel a little bouncy on the rear end, though as with any pickup it can be remedied with some loadbed weight to soften the bumps and help with grip off road. That said, it was much better than the skittish Ssangyong.

Our model came with a frankly pointless sports bar around the load bed, which only has a 30kg load rating, so is all but unusable for strapping down cargo.

It’s the same story in the load bed with no lashdown points or hooks, but a damper on the tailgate is a nice touch.

As with the L200, the Fullback isn’t rated to tow the full 3,500kg limit, which is a downside compared with most of the other pickups on the market.

Fiat sell the Fullback with a sparse offering of engines and spec levels. There are two power choices, both running the same 2.4-litre diesel – a 180hp model and slightly wimpier 148hp.

Entry-level SX trim versions get 16in alloys, cruise control and DAB radio, but only come in the smaller-powered engine option and start at £23,074.

The mid-ranking LX has the more powerful lump and a rear-mounted reversing camera as standard. It costs £25,224, while the top-of-the-range Cross option gets tougher styling, locking rear diff and a bigger touchscreen for a base price of £29,074.