Unsurprisingly, this increase in technical prowess has bumped up the average price of a capable arable spreader. But the trade-off is far higher accuracy over the wider 24-36m tramline widths now commonly used in UK combinable cropping, as well as the promise of a reduction in waste. Ultimately, it should mean that more of your fertiliser investment is returned in improved yields.

But while getting fertiliser out to the full extremities of a tramline pass is pretty much guaranteed with a sprayer or a boom spreader, twin-disc spreaders have a tougher challenge, particularly given that product quality (the shape, size and integrity of granules) can vary widely. Whatever the make and age of machine, tray testing is essential if the most is to be made of a spreader’s capabilities.

Here we concentrate on machines around the 3,000-litre capacity mark – one of the most popular sizes in the spreader market, largely because they can comfortably swallow five 600kg bags. Within reason, though, capacity is largely a simple matter of hopper extensions, so has relatively little effect on overall cost. We’ve also focused on models capable of a spread width of at least 24m.

What tends to have more of a bearing on the bottom line is the level of technology specified on the spreader. Most makers now offer the option of weigh cell technology, which automatically compares the programmed and applied rates and makes any required corrections that may be necessary according to product and environment variations, as well as forward speed.

Section control systems that automatically reduce spread width on short work are also available from most brands. These close down the pattern according the GPS-marked area already covered. This level of tech may not be for everyone, though, so our review covers a variety of machines from the simple to the more complex. 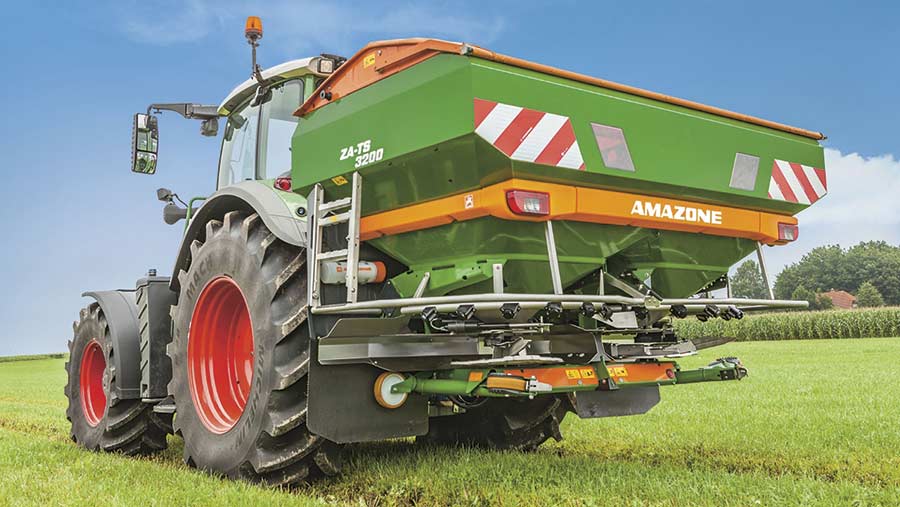 Amazone offers three twin-disc mounted spreader options capable of propelling fertiliser out to at least 36m. Base-spec ZA-M models hold 1,000-3,000 litres, but most arable buyers look to the ZA-V and ZA-TS, both available in 1,400-4,200-litre capacities.

The latter is actually capable of working right out to 54m, depending on the material concerned. Both ZA-V and ZA-TS are variable rate and section control capable, with up to 128 sections on TS models.

New from the firm is WindControl, a development of ArgusTwin to lessen wind’s effect on spreading. A high-frequency sensor measures both speed and direction and works with ArgusTwin to make any necessary changes to the delivery system and disc speeds. Should wind speed become too high, the system alerts the operator.

Expect a starting price of around £15,000 to £16,000 for a 3,200-litre ZA-TS, before adding any options. Here, the primary choice is whether to specify it in Profis (mechanical disc drive) or Profis Hydro (hydraulic) format.

Vicon’s top seller in this sector is the RO-EDW XL Geospread, which is also sold under the Kverneland and Kubota brands.

This can be had in hopper capacities from 1,500 to 3,900 litres, and its eight-vane discs are capable of spreading material from 12m right up to 54m.

The Geospread’s total of four load cells and a reference sensor govern the accurate weighing necessary for precise control of its 24-section control. When this is combined with speed-related spreading and the brand’s Geopoint headland management system, Vicon claims you can get fertiliser savings of up to 15%.

An optional software application within the terminal, IsoMatch Geocontrol, is available for those seeking to control multiple Kverneland Group Isobus-compatible machines through the one unit.

This can be used for functions including section control, variable rate control, documentation and guidance. The spreader can also be operated through any other Isobus-compatible tractor terminal. 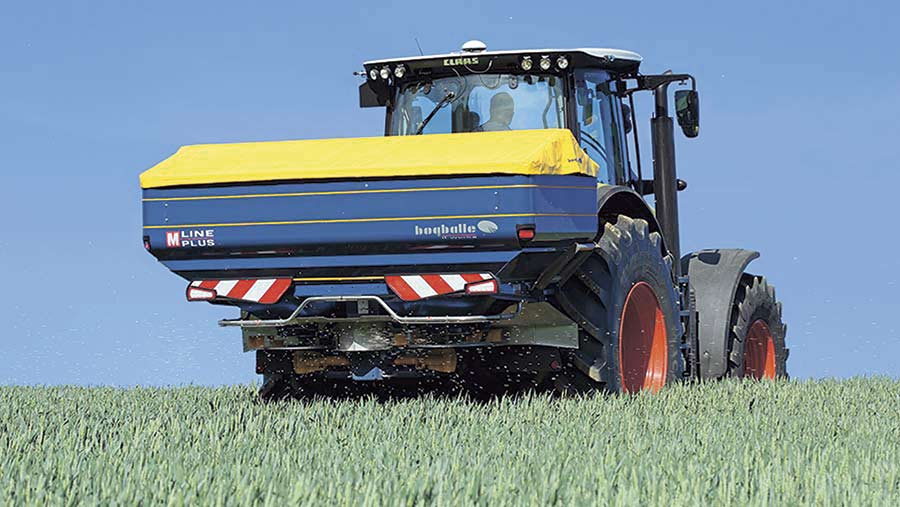 KRM’s best seller is the 3,300-litre/42m version of Bogballe’s M35. This is available with or without weigh cells and – like other Bogballe spreaders – its Trend spreading system’s discs spin inwards when working the body of the field.

Disc direction is reversed when headland spreading, using the back of the vane and creating a pattern said to ensure a sharp headland cut-off.

Controller options include the Calibrator Icon, which governs on-the-move rate adjustment and application rate independently of forward speed, as well as fieldwork data. The recently updated and more advanced Calibrator Zurf electronic controller continuously assesses weigh-cell data for maximum accuracy regardless of bounce, slope angle and hopper contents. All models are also available with Isobus control. Both Icon and Zurf controllers can be linked to GPS systems for auto on/off too. 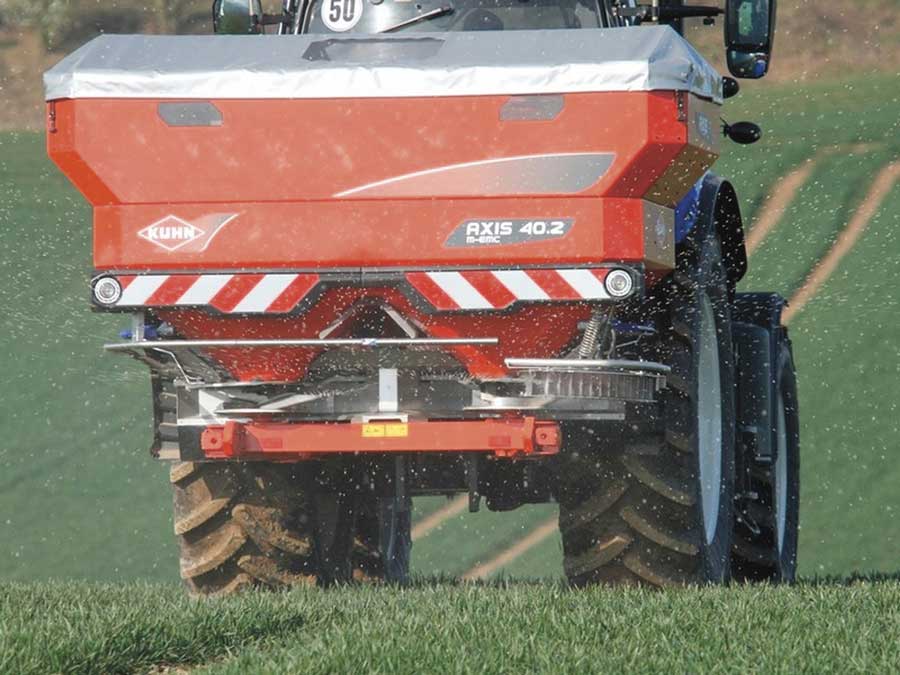 All use Kuhn’s CDA (Coaxial Distribution Adjustment) system for accurate metering at high speeds, and on machines above the basic 40.2 EMC (Electronic Mass Control) technology, fertiliser flow is metered by measuring each spreading disc’s drive torque.

In this way, fertiliser flow from each disc is constantly measured and automatically adjusted to maintain a precise application rate across the machine’s entire spreading width. The EMC system is available in two versions: the Pto-powered M EMC mechanical system and the hydraulically driven H EMC version.

Kuhn’s Vari Spread system uses electrical actuators to continuously alter/adjust the spreading unit’s drop points, outlet positions and disc rotation speed to allow adjustment of spreading patterns across the working width. The system can be controlled either manually or via GPS to prevent over-spreading at field margins.
Prices for a 40.2 start at £14,274. 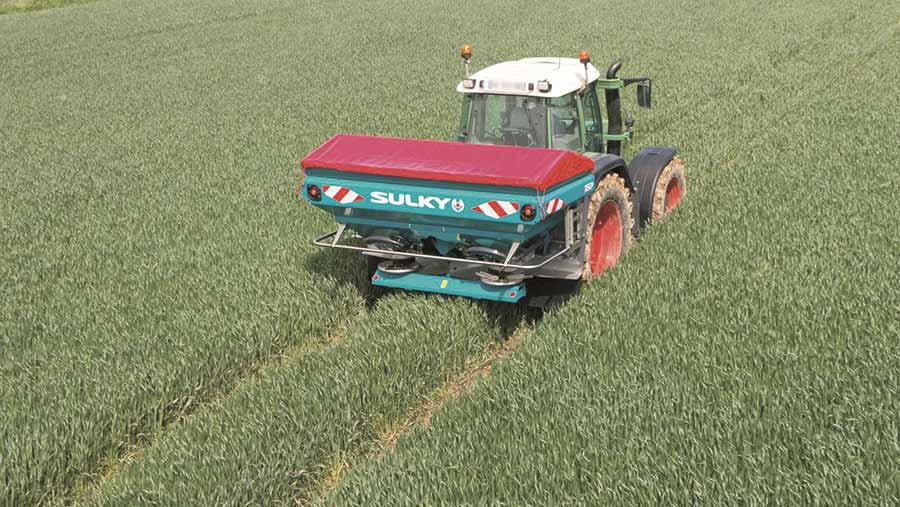 French manufacturer Sulky-Burel, which now operates its own UK subsidiary following the dissolution of former importer Reco, offers its 1,900- to 4,000-litre X40+ and X50+ twin-disc spreaders in two primary versions.

These can be specced with or without Econov, the firm’s 12-section shut-off system, which manages the shape of the spread pattern via either Isobus or non-Isobus controllers. Maximum flow rate is 520kg/min, and for the purposes of our comparison, the largest X40+ version holds 3,000 litres, while the middle X50+ model comes in a 3,200-litre format. A larger 4,000-litre version is also available.

Via Isobus control, Econov opens and closes the spread pattern across 12 sections, regardless of the width to which the spreader is set to work. When arriving at a straight headland, sections are closed systematically from outside to inside, following the curved spread pattern. On triangular work when beginning or completing the body of the field, sections are switched automatically according to the already-spread area.

Recent introductions to the range include hydraulic drive for the spreading discs and right and left low-level sensors.

The right and left low-level sensors can be specified on Isobus versions of the X40+/50+, warning operators when one side of the hopper is nearly empty. Price for a 3,000-litre X40+ starts at £16,920. 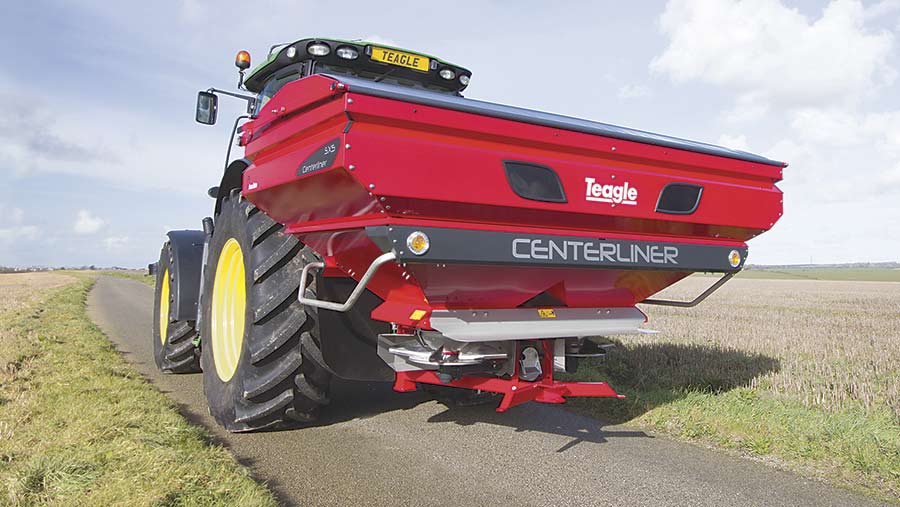 While Teagle manufactures a range of its own 675- to 1,350-litre, twin-disc polyethylene-hopper broadcasters at its factory in Cornwall, its primary focus for the arable market is on the complementary range of Centerliner models of up to 3,650 litres, sourced from Dutch manufacturer Tulip.

Like the KRM/Bogballe machines, these have discs that turn inwards, creating a quadruple overlap pattern. Last year the Centerliner models were revised to form the new Centerliner SX, SXe and SXi models, the main upgrade on which is Easytronic electronic shutter control, which is GPS and ISOBUS compatible.

The key difference between the two versions is that SXi models are equipped with a pair of weigh cells integrated into the chassis to provide automatic calibration and weighed application rate according to tractor speed.

The capabilities of the Easytronic touchscreen control terminal can be extended to provide headland management and the latest variable-rate technology, including GPS communication and, when Easytronic Plus is specified, Isobus control. Hydraulic or electrically actuated headland border spreading systems are on the options list, but there is no weigh-cell option. SXe list prices start at £11,920, while a 3,150-litre SXi lists at £16,785. 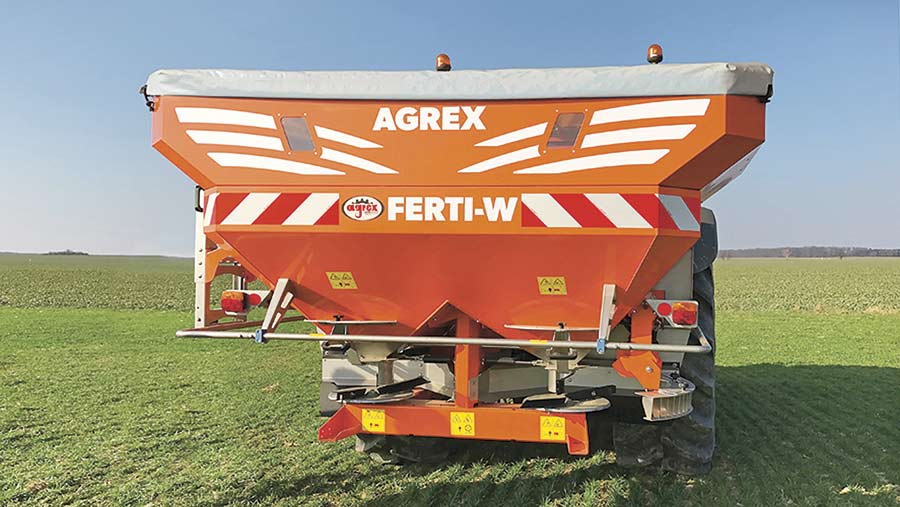 North Yorks firm Rytec has been importing twin-disc spreaders from Italian firm Agrex since 2012 and its key model is the Ferti, now available in Ferti-W weigh cell specification.

The addition of a weigh cell machine means the company now offers models with basic hydraulic shut-off, computer speed-related control or, on the W, full weigh-cell control, with automatic rate regulation via the Agrex Kylo system. This weighs the fertiliser load in the hopper six times a second, using this data to adjust the fertiliser’s drop rate to give accurate application rates irrespective of forward speed.

The machine is being tested with a new section control system with variable drop point and disc speed with or without Isobus control where a suitable controller is specified or the tractor is equipped to match. Prices for a 3,200-litre Ferti-W start from £13,860.