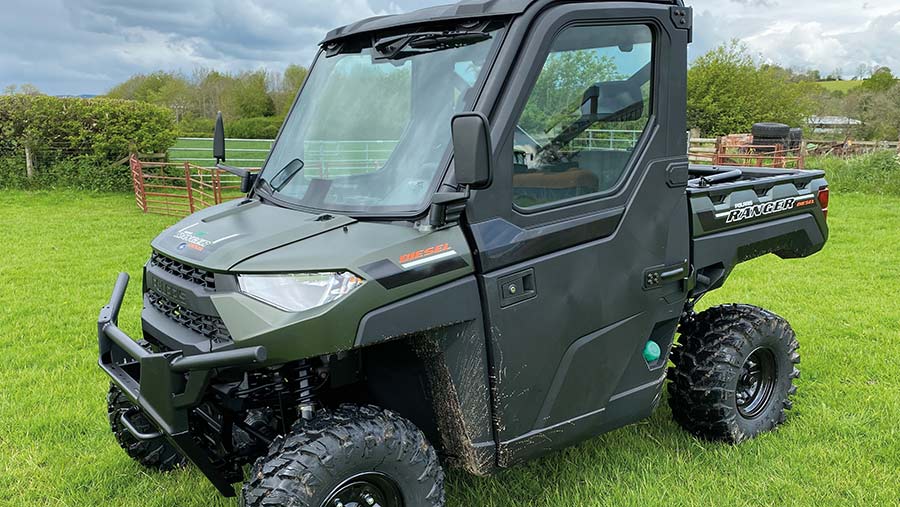 Polaris hails from the US, where utility vehicles can be found thundering around the wilderness on prolonged hunting excursions. As a result, the Ranger can be furnished with all manner of outlandish add-ons, such as satellite navigation, integrated cool boxes, bolt-on bottle openers and even a fold-out fishing tent.

Some of this seems a tad ludicrous, but the benefit is that buyers can configure the machine exactly the way they want it. Our UK-spec Ranger Diesel came with suitable farm-grade extras, including a fully enclosed cabin with winding windows, a swing-out windscreen and a decent heater/fan arrangement. Another nice touch was a neat frame that extends the otherwise meagre load bed.

This generation Ranger was launched in 2019, with a Kubota engine to replace the previous Kohler unit, a redesigned cabin, better suspension and a full CV-joint driveshaft. UK Ranger Diesels are assembled at Polaris’ factory in Opole, Poland.

We’ve berated Polaris for its build quality in the past, but we’re pleased to say that the latest Ranger Diesel is better bolted together than some of its predecessors. Standout features include a revamped ADC engine braking system, sprightly top speed and a well-appointed cabin, plus it’s fairly decent value for money.

The firm’s North American heritage means that the primary engine choice (in many countries) is a fiery 999cc twin-cylinder petrol engine, which delivers as much as 82hp and a top speed of 68mph.

We tested that model a couple of years ago and, while it certainly put to bed any concerns that these vehicles have lacklustre power outputs, it was a bit of a handful. 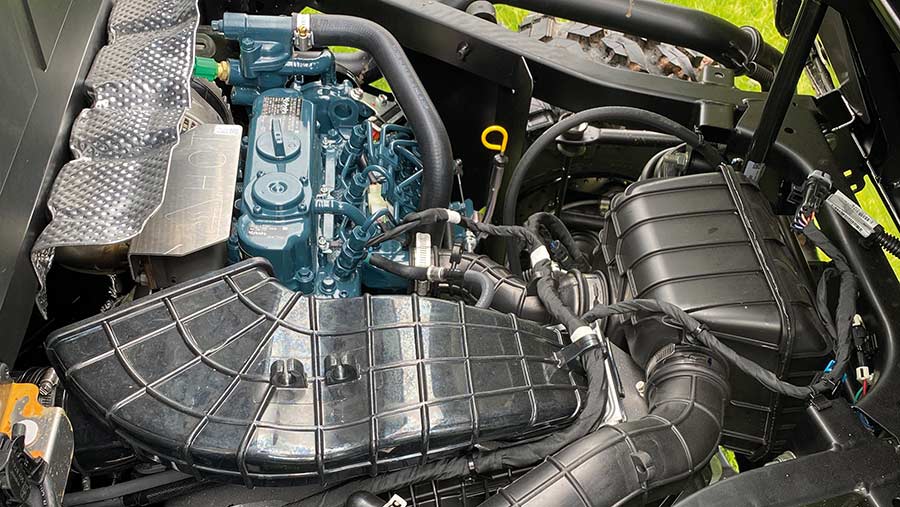 The diesel version is far more sedate, with an 898cc Kubota engine that develops 25hp and tops out at 40mph. That’s considerably lower than its petrol counterpart, but it was still the fastest in our test group and one of the better performers when faced with pulling a loaded trailer up a steady incline.

That said, it was the Ranger’s descending ability that really made it stand out – something that older models really struggle with – and the new automatic descent control (ADC) changes the way the four-wheel drive system operates.

Interestingly, previous-generation Rangers already had a hill-descent function that holds the drive belt taut when the driver lifts off the throttle. However, this was teamed with an automatic four-wheel drive setup that only engaged the front wheels when the rears started to spin.

When descending, this meant the engine braking acted solely on the rear wheels, causing them to lock-up and slide. This could be rather unpleasant on a steep slope, particularly when there was no load on the back. Now, the ADC switch locks the four-wheel drive system so that engine braking is applied to all four wheels.

The results are seriously impressive and, in low range, it will inch down steep slopes even with a fully loaded trailer in tow. It was far better than the other two belt-drive models on test and even out-performed the hydrostatic transmission fitted on the Kubota.

Polaris sources this transmission from US company Team and the current version has a larger belt to improve durability. The firm also says it has upgraded some of the components in the driveline, including replacing the driveshaft UJs with sealed CV joints, which have been a weak spot in the past. 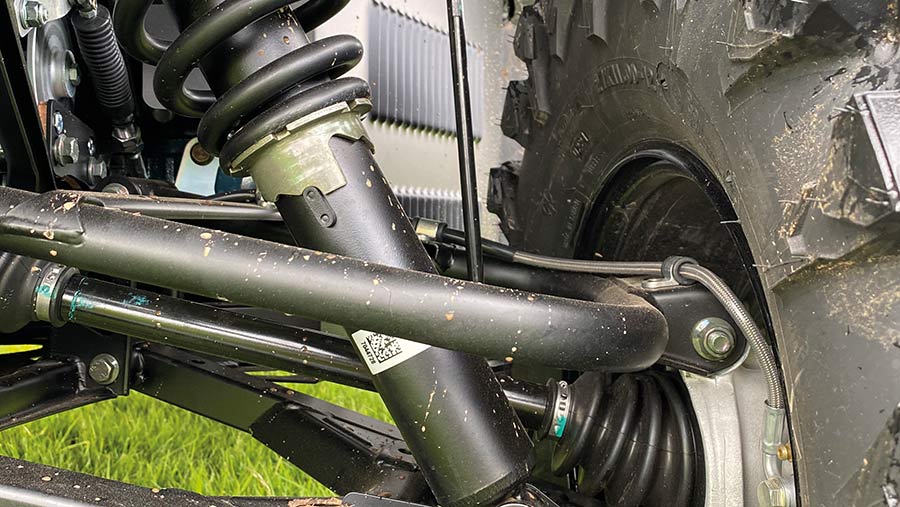 To make life more pleasant on rough terrain, the Ranger has independent wishbone suspension on all corners with almost 300mm of travel and a decent 330mm of ground clearance. It soaked the bumps up well and the chunky Maxxis MU51 tyres offered ample grip. 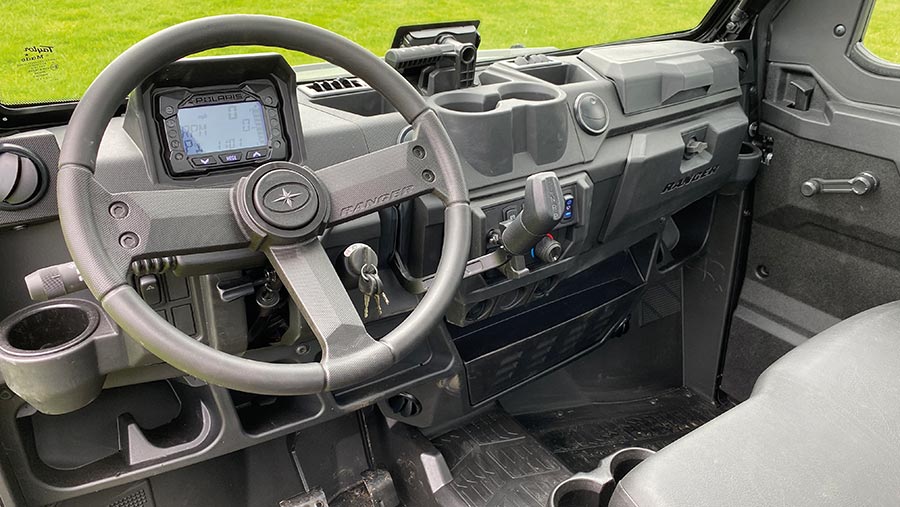 The cabin has plenty of practical storage spaces © James Andrews

The Ranger is a compact machine, but Polaris has packaged it well and cleverly organised the storage space in the cab.

This includes a bin under the driver’s seat and a flip-up passenger seat that provides a sizeable area for stacking large items such as feed bags, an oil drum, or room for a dog. On top of this, there are several cup holders, twin glove boxes and dash cubby holes for stashing bits and pieces.

Ventilation is good, too, with a series of blower vents in the dash, wind-down windows (with the option of electric) and an opening windscreen. This is premium kit, but we think it’s worth the additional outlay.

Another improvement over older models is the park function integrated into the gear lever, so there’s no need to use the handbrake. The only downside is that it isn’t always clear which gear you’re in, so you need to keep an eye on the dash display.

Although it’s clearly well appointed, the cabin does have some shortcomings. Visibility is slightly poor due to the chunky corner pillars, the rubber door restraints allow them to swing open too wide and it’s a little too noisy – particularly compared with the Gator’s car-like levels of hush.

There’s also no driver’s seat adjustment. This wasn’t as much of a problem as we thought it would be, but it could be tight for larger operators. Build quality still falls a little short, but it seems better screwed together than it used to be. 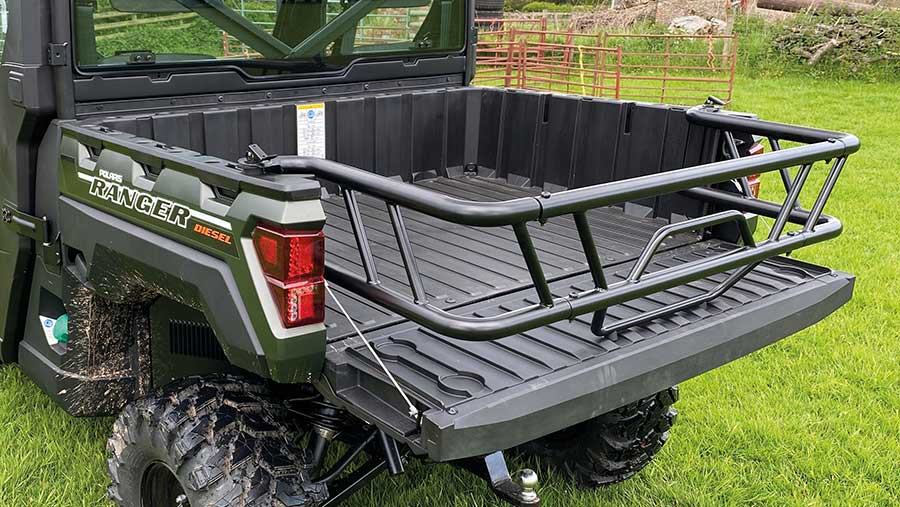 However, one of the penalties for its compact frame is that it has the shortest load bed of all of the buggies tested, measuring just 929mm. To help compensate for this, Polaris offers an adjustable load bed frame that extends the area over the tailgate. This came fitted on our test vehicle and, at a cost of about £195, we think it’s a sensible addition.

The bed is a full plastic construction, but the material seems tough and it clearly won’t rust. There’s a single tailgate release handle, which is ideal for using one-handed, and the tipper mechanism can be activated using handles on either side of the bed. An electric tipping ram is available on the options list.

On our uphill towing test, the Ranger delivered the second fastest top speed – behind the Corvus – but like all of these vehicles, progress was slower than we’d have liked. It was comfortably the quickest on a straight piece of road though, topping out at 39mph. Apparently, it’s good for a little more than this once the belt has loosened up.