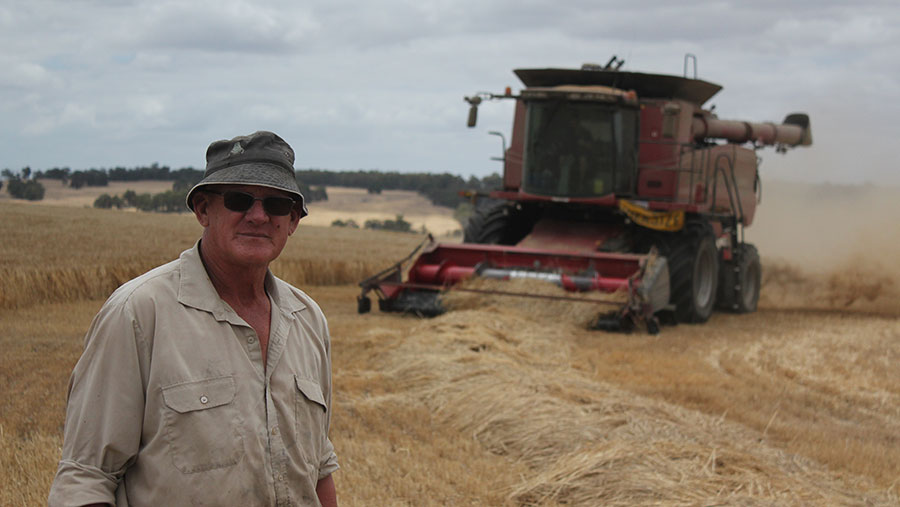 With the address not recognised by the hired Holden SR8’s sat nav system or Google Maps, a stop at the Darkan roadhouse for directions was needed to track down Western Australia’s award-winning farmer-cum-inventor Ray Harrington.

After a further half an hour of driving – some on tarmac and the rest on a rough ironstone gravel road – you arrive in an isolated yard in what is an unforgiving environment to farm.

It’s here on his 3,400ha property, 115 miles south-southeast of Perth, where he developed the machine that could play a major role in fighting herbicide-resistant weeds across the globe.

See also: Articulating Tribine combine is king of the US harvest

“When we switched to cropping, we’d already known about herbicide-resistant ryegrass for 20 years or more at Wongan Hills [in the northern wheat belt of Western Australia].

“It is all about dealing with the weed seeds in the chaff fraction and farmers there were bringing in chaff carts to capture and burn the weed seeds and break the cycle.

“I knew when we found herbicide resistance here, we had to be in a good position to deal with it,” he explains.

Thinking about his own way of catching, carting, cooking or crushing the chaff fraction caused Mr Harrington a lot of head scratching, with a furnace on the back of the combine touted as one solution (but dismissed as impractical and slightly dangerous).

Another was using a big microwave oven – also on the back of the combine – but with moisture content of chaff typically about 9%, it fell short of the 14% required for microwaves to get the seed hot enough to kill it.

Crushing the seed was the next line of thought and Mr Harrington took inspiration from another of Western Australia’s powerhouse industries.

“Cage mills are used in mining to fine down all types of ore and effectively consist of two counter-rotating cages moving at about 1,400rpm to smash the aggregate into smaller pieces.

“I saw one in the power station at Collie [west of Darkan] rendering coal, stopped it to look inside and said to myself: ‘Nothing would survive in that’,” says Mr Harrington.

Geoff Glenn at Agmaster – the same company that manufactures the Harrington no-till range – built a tractor-driven cage mill for Mr Harrington to trial on weed seeds.

Mr Harrington cut some ryegrass-infested wheat, collected the chaff and fed it into the mill. He then planted the pulverised material, and nothing germinated except the concept for the Harrington Seed Destructor. 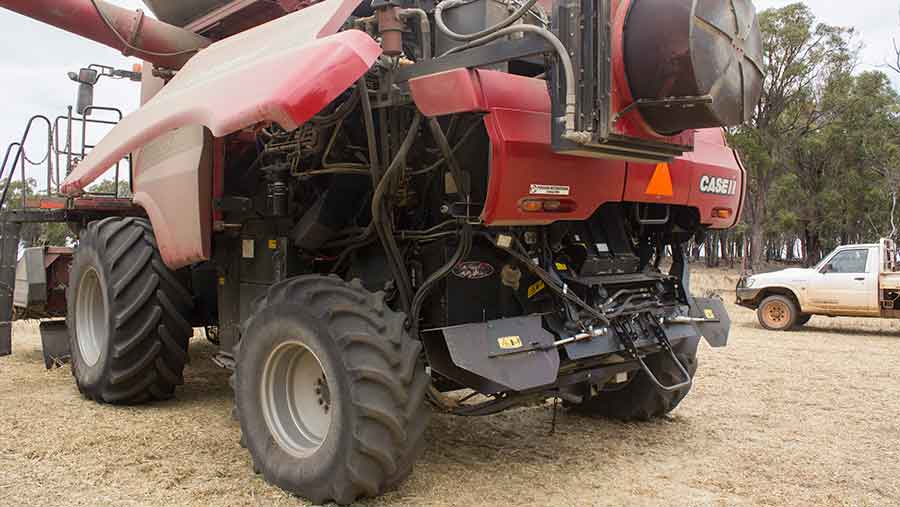 After discussing the future of resistant weed management with Dr Powles, he had mentioned in passing his experiment with the cage mill – and within 24 hours received a phone call.

“Stephen said the idea had kept him up all night and he asked if I could bring some of the material that had gone through the mill in to the University [of Western Australia] in Perth,” he says.

A mature student was blessed with the task of filling sacks with 40 litres of wheat chaff and placing 1,000 coloured ryegrass seeds in each. The contents were then fed into the mill running at speeds of 700, 900, 1,100 and 1,300 rpm.

“When it goes through the mill, the 40kg renders down into a hatful. They took all the chaff away in little brown paper bags and came up with a ‘kill curve’,” he says.

“We got about 98% ryegrass kill at 1,300rpm and the coefficient of variation was so small that the researchers didn’t believe it, so we re-did the whole trial and got the same result. That was about 12 years ago now.”

The comprehensive results secured A$20,000 (£11,000) of backing to produce a prototype that could work behind a harvester in the field.

From a series of chalk marks on Darkan fitter Ron Knapp’s workshop floor, the first trailed Harrington Seed Destructor was built and rolled into the paddock soon after, behind one of Mr Harrington’s two Case Axial Flow 2388s.

The machine uses a chaff and straw transfer system from a chaff cart, which moves the material from the back of the combine to the cage mill, driven by its own 160hp diesel motor. The pulverised material is then spread back on to the field.

The seed destruction trials were repeated, but this time the coloured seeds were dropped in to the combine’s broad elevator to ensure that the extra chaff in a real harvesting situation wouldn’t cushion the weed seeds and prevent destruction.

“The researchers spent a long time picking ryegrass seeds out of the samples again, and the machine did its job,” Mr Harrington explains. “We built another unit and had them running behind our two 2388s and the project was up and running.”

Armed with a working prototype and partnered by Dr Powles, Ray met with Australia’s levy board – the Grains Development and Research Corporation – to apply for funding to bring the Harrington Seed Destructor to market.

They returned with funding secured, and Mount Gambier-based outfit De Bruin Engineering was licensed to build the first commercial machines in 2009.

While this was a major step in the Seed Destructor’s development, a trailed machine was expensive. And for some, towing such a heavy lump behind their combine did not appeal.

As part of the funding contract agreement, a third party had to take the concept and integrate it into the back of a combine – seen as key in taking the technology to the masses in Australia and beyond.

The University of South Australia’s engineering faculty was commissioned to somehow find a way to seamlessly squeeze the cage mill technology into all the major combine brands.

Still engineered by De Bruin and distributed by McIntosh & Sons, the Integrated Harrington Seed Destructor, or iHSD, is now running aboard 75 combines across Australia, including Mr Harrington’s latest Case 8230.

The iHSD consists of two cage mills neatly positioned underneath the straw chopper, driven by a large hydraulic pump that piggybacks off the combine’s main drive line.

Part of the development research showed that in the combine’s airflow, ryegrass seed does not reach any higher than 350mm above the combine’s sieves, so this band of chaff-carrying air is funnelled off and directed through the cage mills.

Mr Harrington says the system sucks about 60-70hp out of the combine and admits the hydraulic version has suffered some reliability issues. It is also expensive – a retrofit version will set you back about A$165,000.

“We are now researching and developing a mechanically driven solution and we think we can improve reliability and get the overall cost down to about A$80,000,” he says.

The reduced cost and improved reliability of a mechanical drive iHSD will undoubtedly make the machine more attractive, but it has some pretty stiff competition in the Australian harvest weed seed control (HWSC) solutions market (see panel).

Mr Harrington concedes the iHSD is not a silver bullet and will not suit every farm, but he has seen it play a major role in keeping resistant ryegrass and wild radish at manageable levels on his own land.

“We were on the back foot and the weeds were telling us what to do – whether that is time of sowing, row spacing or herbicide rates, the list goes on,” he says.

“We now feel like we’re back in control, but you need to keep fighting every year. If you back off because of the cost of it all, it could easily set you back seven years.”

He adds that North America is somewhere that the machine could really take off, with herbicide resistant weeds – particularly to glyphosate – an increasing problem.

“The Yanks have been in denial for a while. The weeds are running all over them and they are now hand-weeding about 7 million hectares of glyphosate-resistant Palmer amaranth.

“Testing on its seed after going through the iHSD has shown a 99% kill and retention at harvest up at 99.9%. There are now five machines working over there and it could make a big difference.”

Harvest weed seed control kit – what are the options?

Harvest weed seed control (HWSC) – the process of catching and destroying weed seeds – is now active across 63% of the combinable cropped area in Western Australia and about 43% nationally. There are several very effective methods growers are trying, with varying cost and complexity.

Metal plates direct chaff into a narrow line behind the harvester, with the straw chopped as usual, and the windrow either grazed with sheep, left to rot or burned.

The beauty of a chaff liner is that it can be installed in the farm workshop for as little as A$500 (£280).

Similarly, in controlled traffic farming systems a chaff deck can intercept and place the chaff fraction behind the wheel tracks of the combine and in the rows, leaving the chaff and weed seeds to decompose. A retrofit kit will cost about A$15,000-A$20,000 (£8,450-£11,300).

Chaff carts are towed behind the combine and once the chaff fraction is conveyed into a hopper, it is dumped in lines across the field and either burned, grazed with sheep or both, destroying any weed seeds. A typically chaff cart costs about A$80,000 (£45,000).

Developed in Western Australia, the bale direct concept sees a big square baler towed behind the combine, collecting and baling all chaff and straw. Tests show it removes 95% of the ryegrass weed seeds entering the header.

Inspired by the mining industry, this directs chaff through two counter-rotating cage mills which sit at the back of the harvester, behind the sieves and below the straw chopper.

Research by the University of Western Australia estimate the iHSD kills 97-99% of weed seeds that enter its moving parts.

Its major advantages are that it requires no post-harvest labour, such as burning, and there is no nutrient take-off. An iHSD unit costs about A$165,000 (£93,000).

Could the iHSD work in the UK?

With herbicide-resistant blackgrass as much of a problem to UK growers as tough-to-kill ryegrass is to Aussies, Farmers Weekly asked Mr Harrington whether his invention might be of any use on these shores.

“It could be a good tool for blackgrass. The problem is getting the bloody stuff in the header [combine],” he says.

Unlike ryegrass, which holds on to its seed very tightly until cereal crops are mature and ready to harvest, it is estimated that blackgrass holds on to just 30-50% as combines start to roll in British wheat fields.

One idea Mr Harrington touted was to find a way of cutting off immature blackgrass heads above the crop during June, forcing the plant to regrow.

The resulting heads will then mature later and will be picked up by the harvester and fed into the iHSD.

This would be a tough ask to implement successfully, but with bromes and herbicide-resistant ryegrass becoming a significant problem in parts of the UK – both of which hold on to 90% of their seeds until harvest – perhaps it won’t be too long before one is working here.