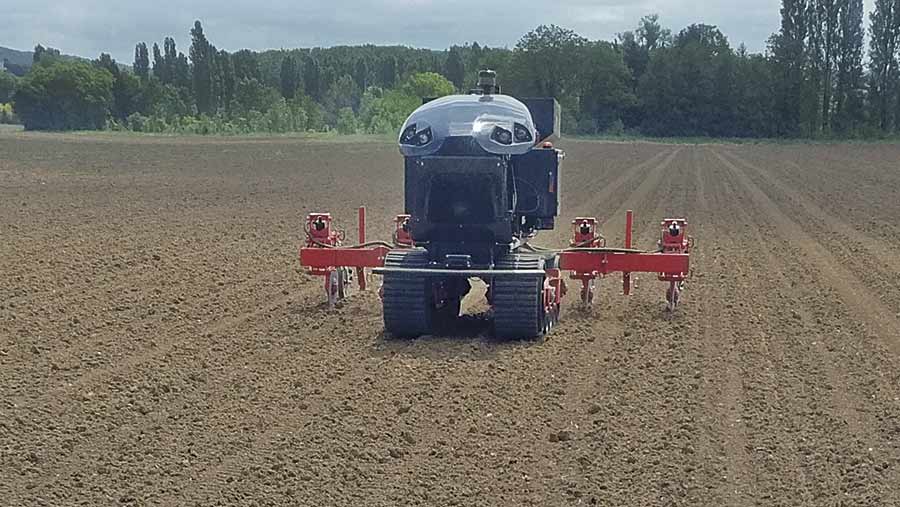 Controlled by an app, a French technology company has built three highly accurate robots that are cultivating, drilling and caring for a 50ha crop of maize, completely autonomously.

The project – called Challenge Centeol – is taking place in Burgundy, headed by AgreenCulture, and bears some similarities to the Hands Free Hectare project, run by Harper Adams in the UK, which is now in its second year.

AgreenCulture’s primary focus is to reduce soil footprint and care for the soil, while maintaining yields and reducing inputs.

The three Centeol robots each weigh a tiny 300kg and have been created and built by the team at AgreenCulture, along with partners including machinery firm Kuhn, seed specialist Dupont Pioneer and technology engineering firm Ausy, among others.

The robots, which have Fendt-like bonnet styling, run from diesel engines and all sit on twin tracks, meaning ground pressure is kept to a minimum.

The project began in October 2017, when a specially adapted tool was attached to the robot, which took soil samples every five meters to help reduce inputs when drilling and fertilising.

Two robots then used a specially built strip cultivator so only the soil the seed would be planted in was moved. The robots were all fitted with their own RTK systems working to 10mm precision, from maps already in place or ones they produced themselves.

In April 2018, all three robots worked simultaneously in the same field. The first one dropped fertiliser in the cultivated strips and worked from soil analysis maps to add the correct amount for the varying soils, before its two siblings followed behind with drills.

Planting speeds of about 8kph has been achieved. However, because of the wet weather experienced in southern France this spring, the progress has been slow and the drilling is yet to be completed.

Future plans for the crop will be a dose of post-emergence nitrogen about a month after drilling, before three further inter-row weeding operations by two robots in the run-up to harvest.

The weeding takes the place of any further chemical control methods.

There are five different tools that attach to the tracked robots, which have a 24-hour autonomous run time, which means the only human-controlled job will be harvesting the crop later in the year.