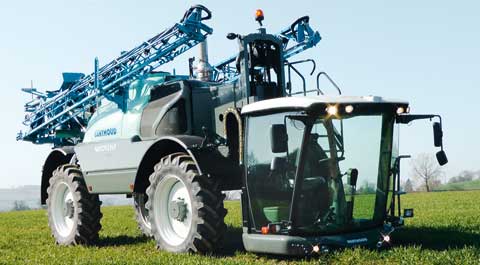 Berthoud’s self-propelled Raptor sprayer has had a front-end redesign. The new FC model gets a front-mounted Claas Jaguar cab to provide operators with forage harvester-style visibility and is fitted with a novel ground-level entry system

There’s no clambering up and down steps with this sprayer – the Claas-built cab lifts up and down hydraulically. Operators simply have to hop on and then elevate themselves up into position by flicking a rocker switch. It has no pre-set height position, though, so keen operators can choose to sit closer to the crop should they want to keep an eye out for particular disease or weed problems in the crop.

In the cabin, operators are treated to climate control, Bluetooth CD/radio and a pneumatic seat as standard.

While introducing the Raptor FC, Berthoud has also taken the opportunity to offer a new tank size. So, as well as the 3,200 and 4,200-litre versions – well suited to the UK market – there is now a 5,200-litre option, too. Meanwhile a 550-litre twin-turbine pump working at up to 8bar can fill the tank in just four minutes.

Power is provided by a mid-mounted Deutz six cylinder engine. A 180hp version is standard on the 3,200-litre, while the larger-capacity machines get a 217hp powerplant. There’s also a 224hp engine for those looking for a bit more oomph.The Raptor is capable of 40kph, with two Rexroth hydrostatic pumps driving four variable-speed wheel motors.

The hydrostatic drive system means it can run at low revs, using the foot throttle or joystick depending on operator preference.Steering-wise the Raptor can manage two-, four-, crab- and rear-wheel steer. Cruise control, which pre-sets a forward speed, and mechanical track width adjustment (1.8-2.25m) are standard features.

There are currently two boom options – the central pivot Axiale and pendulum suspended Ektar, which both have boom recirculation and air cut-off. A new Ektar B2 boom is due to be launched in France this summer with dual suspension – both a pendulum system and axial option that can be selected at the flick of a switch. Boom widths on the Raptor extend from 24m to 40m.

Berthoud’s own eC-Tronic computer system is standard on all machines, although the older, more basic DPTronic system can be specified. The unit has switchable quick-keys for all hydraulic functions.

The most eye-catching feature, though, is the e-Pilot wireless joystick. This can be detached from the holder and works as far as 20m from the machine, meaning the operator can control nozzles and boom from outside. The company says it is useful for dealing with blocked nozzles and for checking the spray pattern.

Berthoud has opted for a TeeJet system to provide steering guidance and auto boom section control (auto boom height sensors are an option).

The Raptor also comes kitted out with Berthoud’s Dualelec 5 filling, rinsing and agitation control system. The clever programme reduces the degree of agitation as the amount of liquid in the tank decreases. Rinsing functions can be controlled from the tank, too.

The company also offers a small 2,500-litre Raptor with 24-28m booms, while the previous Raptor is still available for those who prefer a mid-mounted cab.