The first vehicle to have one is reckoned to be the US-made 1942 DUKW amphibious truck, but other systems came along pretty quickly as the Cold War adversaries battled to get the technological upper hand.

Then, in 1984, General Motors offered civilian versions of its Humvee-base called the Hummer H1 and fitted the technology to various big US pickups. 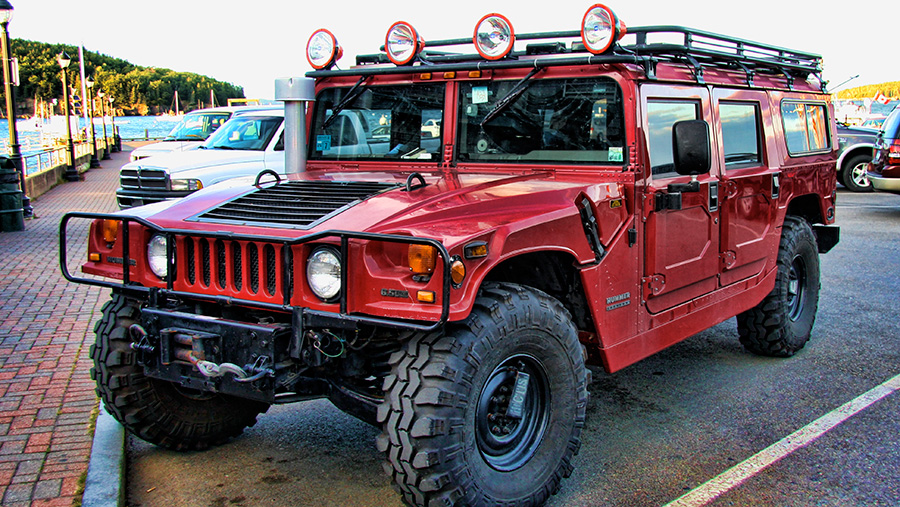 However using CTI to reduce compaction on agricultural fields is a relatively recent development.

For that you have to thanks a couple of big companies including German firm PTG, which has been making CTI systems for tractors and self-propelled sprayers for quite a while.

Heading to the UK

So why haven’t we seen them in the UK?

It’s mainly about cost and availability – it’s a niche market (and therefore expensive) and up until now there simply haven’t been the companies to provide the kit.

The technology has improved too, with clever rotary valves and drilled-out axles speeding up inflation/deflation times.

It has arrived at a good time, too, with farmers becoming ever more concerned about the increasing weight of big, modern machinery on soils and the effect they are having on compaction.

The jump in weights of farm machinery is pretty striking. 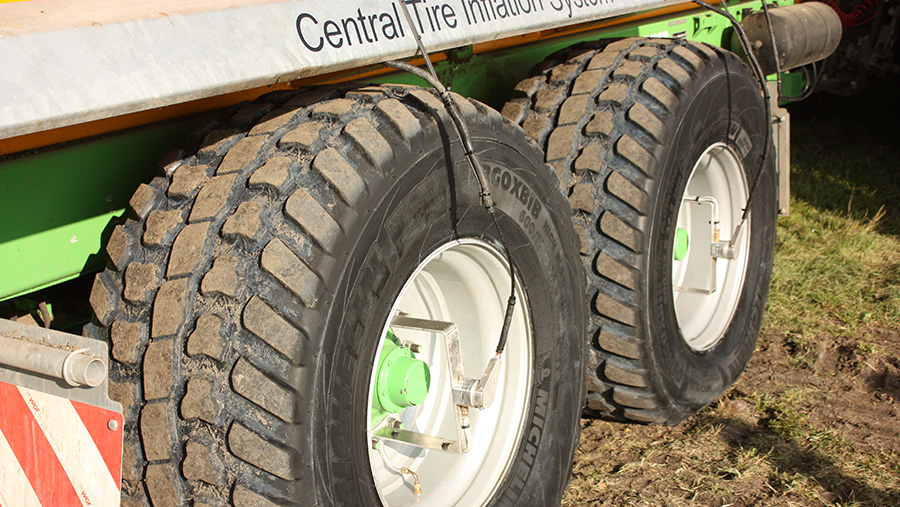 A big combine with an 8t grain tank, meanwhile, can tip the scales at close to 50t.

And though the latest ultra-wide tyres from the likes of Michelin and Bridgestone are amazingly good at spreading the weight of the tractor on the field and running safely on the road, it’s still a pretty big compromise.

So what can CTI do to help? We talked to some of the companies involved.

The company’s Nick Constantine points out that spreading the weight of the machine over a larger footprint reduces compaction significantly and can potentially bring a 6% improvement in yield.

Lowering tyre pressure in the field reduces wheelslip pretty dramatically as well. For instance, if you drop your tyre pressure from 22psi to 13psi, you should be able to cut wheelslip from an average of 21% to 16%.

Equally, if you want to keep to a constant 15% slip, then dropping from 22psi down to 13psi potentially gives 35% more traction.

That should, in theory at least, let you use a lighter, lower-horsepower tractor for the same job.

As you leave the farmyard and head off on the road, you press the road button on the screen and the system pumps up the tyres while you are moving. 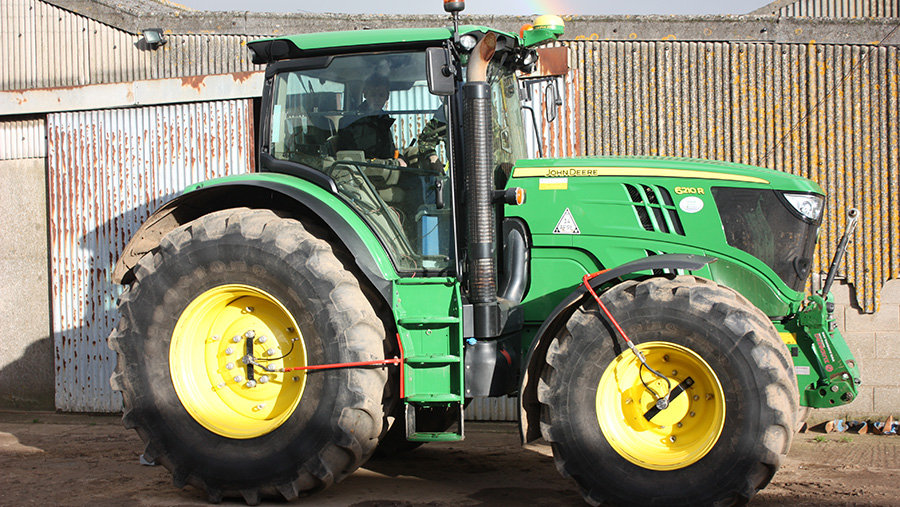 Then, as you turn into the field you press another button that lowers the pressure on all four wheels to a preset level.

As well as offering several preset settings, pressures can be altered 0.1bar (or 1psi) at a time, giving fine control for any conditions.

A control box under the tractor’s cab sends a signal to the system’s brain to let air out of the tyres.

The process happens in reverse when you go back on the road, using pressure from the air-brake reservoir to inflate the rubber.

All you hear is a slight hiss as the air goes in and out of the tyres. What does it cost? You’ll need a tractor with an on-board compressor; then you have a couple of options.

The simplest £590 set-up allows you to inflate or deflate two tyres at the same time. A more pukka £2,300-£3,700 version gives you an RDS control box in the cab and lets you change tyre pressure on the move.

Based also on hardware from PTG, it’s designed to fit the company’s trailers and works in a similar fashion to the Tractair system. Four 120-litre air tanks are fitted between the axles.

HM Trailers boss Grant Perry points out the system can turn a standard set of 560/60 R22 trailer tyres into a much more field-friendly proposition thanks to its ability to inflate and deflate the tyres as you go along.

That means your rolling resistance in the field drops, fuel consumption shrinks and tyre wear on the road improves too.

There are two options, says the company. The twin-line system routes the air line through the axle itself (so, no danger of catching the pipes on bushes or gateposts). 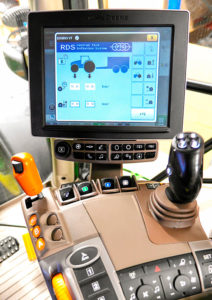 A sealing valve on the rims reduces the risk of the tyres losing pressure when sat in the barn for lengthy periods or if the pipework itself was damaged.

A cheaper single-line option is also available. It runs through the axle like its more expensive counterpart but ball valves on the rim have to be closed if the trailer is left standing for long periods.

There are two options for cab control boxes, too. The analogue version on the trailer is set manually to either field or road pressures, with a switch in the cab to change between them.

The more pukka version uses an Isobus connection that lets you set a pressure and then increase and decrease pressure in 0.1bar jumps.

German maker Fendt has been working with CTI systems for some years and showed an all-singing-all-dancing CTI system back in 2011 that controlled pressures in both tractor axles, plus all four trailer tyres.

Increasing pressure by 1bar takes 10 minutes, while dropping them takes just two minutes, it says. That might sound tedious, but you can do the pumping up and letting down while you’re heading to or from the field.

Its latest set-up – called Variogrip Pro – was shown at last year’s Agritechnica show and promises to speed up the process.

Fendt has also joined forces with tyre maker Mitas to design an extra inner tyre (called AirCell) to cut down the time it takes to pump them up. 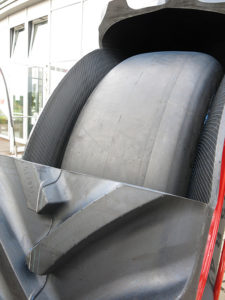 This can cut filling time by just 30 seconds, but the AirCell is not in contact with the tyre itself so doesn’t create any additional friction or heat.

The clever bit is the two compartments (the main tyre and the AirCell within it) are separate, but air can be pumped in and out three ways:

Transferring high-pressure air from the AirCell into the tyre happens very quickly (10 times faster than when you normally pump up a big tyre, says the company) and means that if you need to change tyre pressures you can do it relatively quickly.

It will be available from November 2016 onwards, but there’s no word on price yet.

Who else is using this technology?

Mercedes’ Unimog tractor/truck was one of the first companies to offer CTI.

Its redesigned central tyre inflation system (CTIS) is called Tirecontrol Plus and is available as an option. It’s integrated in the portal axles, works either automatically or manually and is said to be easy to activate from the steering wheel.

There are three selectable modes, providing potentially good traction in the fields, reduced consumption on the road and good handling at speed.

This Humberside sprayer specialist has been selling high-end self-propelled machines for contractors and big farmers for many years.

It was also one of the first companies to offer central tyre inflation.