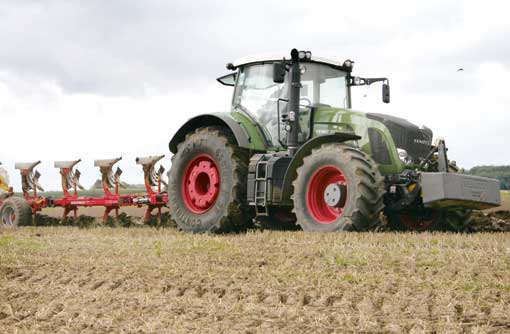 Investing in more advanced tyres and managing pressures to take maximum advantage of their traction capabilities can also make a valuable contribution to overall work rate and fuel efficiency.

The point was well illustrated at last year’s Tillage-Live event, where instead of displaying a static selection of tractor tyres, Michelin’s agriculture team staged a live demonstration of the impact of tyre choice on performance.

“We wanted to show in a dynamic way how tyre selection and pressure management can have a very obvious effect on performance in the field,” says Michelin technician Andy Balfour. “We worked identical tractors with identical ballast and implements over a 100m course to highlight the impact of differences in traction and work rate.”

On hand were two Case IH Puma 155 tractors, with a maximum engine output of 168hp for draft work. Apart from having different drivers, they were identical other than being fitted with different tyres – Michelin Agribib regular radials on one, XeoBib Ultraflex radials on the other.

To test their capabilities, both tractors worked a 2.5m linkage-mounted Sumo Trio cultivator on previously untouched stubbles, in dry conditions.Weighing in at 2,420kg, the five-leg subsoiler with discs and packer roller is a fairly demanding implement, both to pull and – given the overhang effect – to lift.

It contributed to a total rear axle weight of 8.5t when raised on the three-point linkage, which is the worst case scenario for calculating the appropriate tyre pressure.

For the front tyres, that situation is when the implement is on the ground; in this case, they had to support just over 1.9t between them.For comparison, Michelin technicians fitted 20.8R38 Agribib radials to the back wheels of one tractor, paired with 16.9R28 versions on the front.

Despite looking a comfortable size for the tractor, checking the load index charts for these tyres reveals they are marginal for operating the Sumo cultivator.

“The rear tyres really need 25psi to carry the load in this situation but their maximum is 23psi, so in reality they were overloaded,” notes Mr Balfour. “The front tyres are inflated to 20psi to cope with the ballasted front end of the tractor.”

Given that ground pressure more or less equates to the pressure in the tyre – within a few psi, anyway – it is apparent that these tyres under these circumstances would not be offering much in the way of flotation.

Grip would also be compromised, simply because when pumped up sufficiently to carry the load, carcass stiffness then prevents the tyre planting the optimum amount of rubber on the soil.

“As a rule of thumb, getting three to four lugs on the ground when standing on a hard surface is ideal,” says Mr Balfour. “Anything less than that and both flotation and traction are compromised.”

Tyres from the other end of Michelin’s technology spectrum equipped the other Puma – XeoBib VR 710/60R38 on the back and VR 600/60R28 up front. These match the rolling circumference of the Agribib sizes so are direct replacements, albeit needing different rims.

The “VR” reference in the size identification highlights the extra-supple nature of a sidewall structure that also has considerable strength. It gives the XeoBib the capability to run with as little as 14.5psi pressure. The difference in the inflation pressures needed to support the same loads is marked: a more attractive 15psi on the back and just 8psi on the front.

“At those pressures, the tyres can still be run at up to 50kph on the road – in fact, they are rated to 65kph,” says Mr Balfour. “More importantly, perhaps, it means the carcass can deform and plant an elongated contact patch and place the full width of the tread on to the ground.”

That not only reduces the impact of the tractor and implement’s weight on the soil, but also ensures the tractor can more efficiently convert its power into useful work.

Over numerous runs during the course of the Tillage-Live event, the Puma shod with the larger, more sophisticated tyres typically completed the 100m run 10% sooner than the other tractor, even though visually the second tractor was not struggling to any obvious extent.

“When you add the ride comfort benefits of these strong, but supple tyres, this performance advantage makes a clear case for growers to invest in more advanced tyres and for managing inflation pressures to make best use of them,” Mr Balfour suggests.