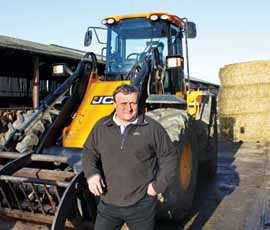 A well-planned machinery replacement policy is key for any large contracting business and Wiltshire-based Contractor of the Year Chris Awdry is no different.

With his stubble-to-stubble contracting, home farms and silage work extending to over 7,200ha (18,000 acres), keeping kit up to date is essential.

In winter, he reviews current machinery and looks at possible new purchases.

Right now it is the mowing operations, Lexion 460 combine and GPS kit that is coming under the spotlight. Not to mention replacing some of the 17-strong tractor fleet.

Despite an obvious focus on new machinery, Mr Awdry says there is still a place for smaller or older workhorses on the farm. “Having all this power is great but we still need smaller tractors to run less power-hungry machines,” he says. “There’s no point using more fuel than we need to.”

So the 9cu m Shelbourne Reynolds mixer wagon has an ageing John Deere 3040 as its motive power while a Lucas G feeder/bedder is powered by an old 2140. And yard-scraping is done by a Ford 4600 that’s just completed 22 years on the farm.

“There is a balance to be had between regular replacements and retaining the services of reliable machines,” he says.

Still working as part of the main tractor fleet, a four-year-old New Holland TM140 has racked up some 4,500 hours. And, while most purchases might involve new kit, it’s not always the case. In fact, the firm’s Case STX480 Quadtrac had 4,250 hours on the clock when it turned up at Ashton Hill Farm.

With the grass silage acreage stretching to almost 4,450ha (11,000 acres), Mr Awdry reckons a self-propelled mower is easily justified. For the last six years he has been running a Claas Cougar with a 14m (46ft) cut but that is set to be replaced.

“In some of our smallish fields the width of the mower makes manoeuvrability a problem,” he explains. “But more than that, the Cougar can’t be fitted with groupers so swathing isn’t an option. With all the flinty land we cover surrounding Salisbury Plain, we need to minimise the raking we do.”

Investing in a swathing mower could add significant value to the business, reasons Mr. Awdry, who also has contracts for fragile lucerne which needs minimal disturbance once cut.

Mr Awdry admits that the business was relatively late in adopting GPS, the first unit appearing on the farm four years ago on a John Deere 6930.

Part of his philosophy is to buy the tractors his staff prefer, hence the mixed colour-scheme. But the fleet’s diversity of manufacturers has left him with four different GPS systems running across the business, something that he would like to streamline.

“With up to 22 drivers during busy periods, having a universal system that everyone can become familiar with would certainly help,” he says.

John Deere’s StarFire programme provides guidance, but not steering, for the two Bateman sprayers, as well as green and yellow tractors. Trimble is fitted to the Quadtrac and Topcon on the Challenger, Fendt and Massey.

So far GPS costs have totalled £55,000 and until the systems are streamlined the bills will not let up. The systems depreciate fast, too.

He has considered investing in nearby RTK base-station masts, while subscribing to others further afield if and when they are needed. Topcon is the most likely choice of provider because it’s not allied to a particular tractor maker, so is more versatile than other options.

Winter will also see a change to the combine fleet, with Mr Awdry looking to replace the wheeled Lexion 460 with a tracked 570TT.

“Contract combining is a competitive market, and we need to be as efficient as possible,” he explains. “The straw walker machine is just too slow, with throughput well down on the 570 and 580 rotary machines.”

The change will also mean transport width is kept to a minimum, with track-equipped models hogging far less of the road when moving between fields and saving the hassle of a convoy.

“Making these changes and keeping up-to-date may make life easier but it doesn’t always have a direct impact on profit,” he explains. “But we’re constantly looking to add more value for customers and inevitably that means investment for the coming year.”