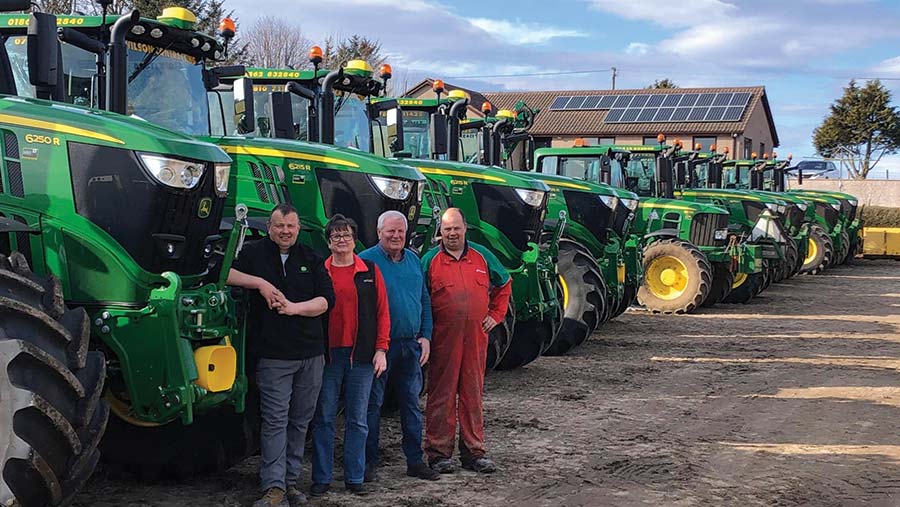 The team at Allan WJ Wilson

Farmers Weekly finds out what has changed for last year’s Contractor of the Year winner, Allan WJ Wilson, which has forged on with machinery replacements despite a challenging winter.

Who are Allan WJ Wilson?

The old ones had Directdrive transmissions, but we’ve decided to swap to the Autopowr CVT. It wasn’t a big price jump and it will hopefully allow us to utilise a bit more of the tractors’ power.

The 6250R should be comfortable running the triple mowers and the extra power gives us the option of moving to bigger implements in the future.

However, this time we took them on a full-service deal over five years. Modern-day tractor repair bills are frightening and a couple of gearbox problems could completely floor us, so we wanted a bit of extra protection.

As well as the tractors, we’ve got a new combine – a 500-hour Claas Lexion 760 to replace the 570TT. The old machine was on 2,000 hours and caused a fair bit of trouble last harvest that resulted in some big repair bills.

In the process, we’ve upped header width to 30ft for a bit of extra capacity. We’ve still got the Lexion 550 as well.

The other major addition to the fleet is a new McHale Fusion baler.

The old one had made 55,000 bales so was due a change, and the new model has an on-board computer to record silage dry matter and total weight, which means we can give customers a print-out at the end of the job.

Anything else planned this year?

However, farmers are unlikely to be buying a lot of machinery, so contractors might find themselves a bit busier over the next couple of years – provided they’re able to adapt to the demand.

For us, it’s a fine line between thinking ahead and not spending more money than we need to. Part of that involves regularly touching base with customers, getting involved in their decisions and generally keeping our fingers on the pulse.

How has it gone this season?

Like most of the UK, we had a very wet autumn and winter. However, it didn’t affect us too much – we already had the oilseed rape drilled and there isn’t much of a market for winter wheat around here.

Fortunately, we had a few side-line operations to keep the lads busy during the quiet period, including gritting and snowploughing.

Our three drills have just finished the spring oats and barley. We started on the lighter land on 6 March and, through the 1,800ha, only lost one afternoon to rain. 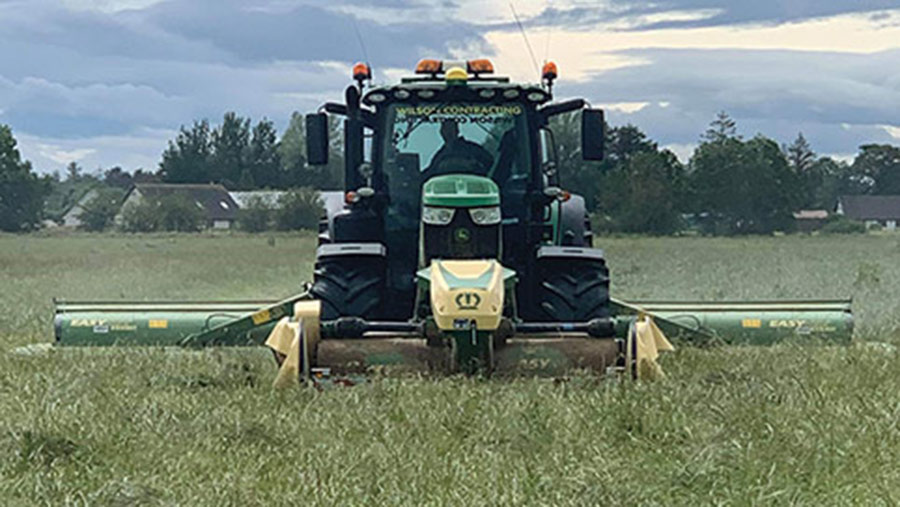 By the time this goes to print, we’ll have drilled the fodder beet with the Vaderstad Tempo and then it’ll be on to turnips.

Whether there will be a strong demand for silage is more questionable, and we’re braced for a reduced workload.

It’s also noticeable how quiet the phone has been with people asking for odd jobs. We haven’t done anywhere near the amount of horse paddock reseeding or topping that we’d usually expect.

The main lime quarry has closed as well, which has limited our spreading capacity. We can’t get gravel or pipe either, so drainage work has stopped – one way or another the coronavirus shutdowns have hit everyone.

From a contractor’s point of view, the lack of interaction with customers makes the job a bit lonelier.

No one knows how the year will turn out, but agriculture is a resilient industry.