While striving to limit the travel of machinery across arable acreages is a very worthy cause, it’s not always that practical.

True controlled traffic farming (CTF) zealots will tell you that every piece of kit must travel in the same wheelings year after year. But the reality is that, for most farming businesses, it’s simply not realistic. 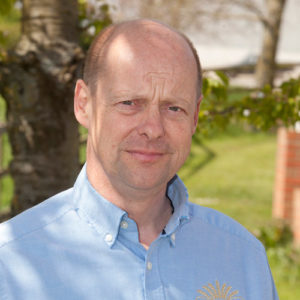 Having converted over to full-on CTF some 12 years ago, Bedfordshire contractor Robert Barnes has moderated his approach during the last decade.

He’s still focused on minimising the passage of equipment over his customers’ ground but with a more pragmatic attitude to exactly how that’s implemented.

“With the arrival of ultra-accurate Trimble RTK steering, in 2005 we made the leap from a very conventional broad-acre non-inversion tillage system – Simba Solo, Vaderstad TopDown and Rapid drill – to a fairly extreme CTF set-up,” he said.

“Claas had just brought out its 10.5m cutterbar so we were brave and went for a 40m boom on our Bateman. We stretched an 8m Vaderstad Seedhawk tine-drill to 10m and invested in a 16t Horsch chaser-bin. With all that we were able to stick to 10m repeatable wheelings, year-on-year.”

The following four seasons proved the concept was workable and, unlike other growers making the switch, Mr Barnes saw no drop off in crop performance through the transition period.

Buoyed by the success of the approach and the massive savings in establishment costs thanks to the simultaneous switch to no-till drilling, he decided it was well worth investing in further. 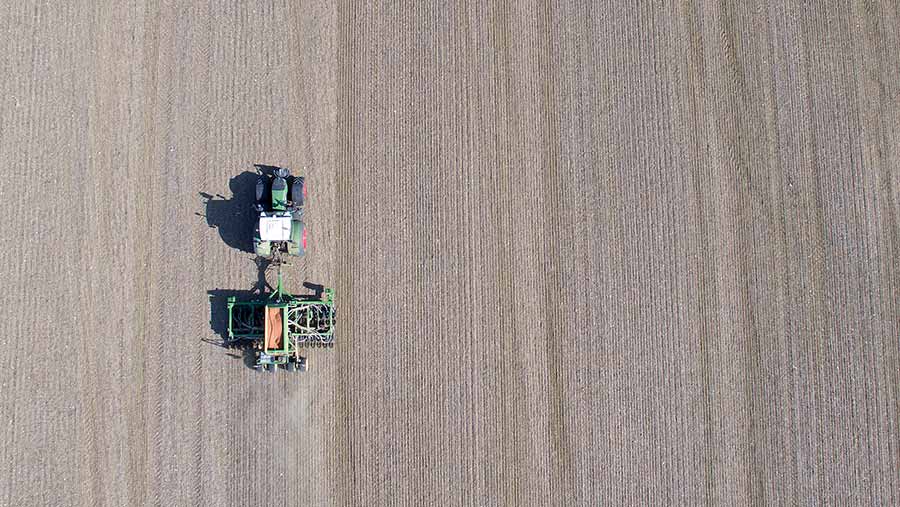 By this stage Claas had brought out a 12m header (which actually cut a 11.66m swath) and with the business’ two Lexion 600s due for renewal, Mr Barnes opted to widen working widths.

The 40m boom on the Bateman RB55 had 2m lopped off each end to take it to 36m and to suit the unorthodox cutterbar size. The end nozzles were shut down to make for a span that matched three 11.66m bouts.

Of course, moving to such a wide bed width made the choice of drills fairly limited. There wasn’t much scope to further extend the Seedhawk’s wingspan, but keen to continue with a knife-coultered tine-type drill, Mr Barnes contacted John Dale to enquire about the firm’s EcoDrill.

At the time the company didn’t build a 12m toolbar, but that didn’t put him off. Convinced it was possible, he contacted ex-Simba engineering wizard Philip Wright who came up with a double-fold design that would work.

At the time Mr Barnes had Harper engineering graduate Shane McGuiness working for him in the farm workshop and, following Mr Wright’s CAD drawings, he put together a frame that would match the new system’s pass-to-pass widths.

“Although we were still constrained by the 11.66m cut width of the Claas header, with an eye to the future we decided to make our home-built Dale a true 12m machine.

“In work we simply blocked two outlets off at the distribution head and lifted the outer coulters on each side out of work. It worked perfectly.”

For six years the Dale was responsible for all the crop establishment on the Barnes’ own land and the lion’s share of the business’ remaining drilling, alongside a 6m Vaderstad Rapid cultivator drill and a Claydon 6T strip-till drill. But with varying conditions depending on the season, Mr Barnes could see the benefit of adding an altogether different drill into the mix.

“We had proved pretty convincingly that we could make a tine-type drill work on most of our ground most of the time. But we needed more versatility – a disc-drill would mean we would have all bases covered.

“Last winter we had made the decision to swap the combines once again and so for last harvest we would be getting a true 12m cut from the headers. That opened us up to get back to a proper 12m system.” 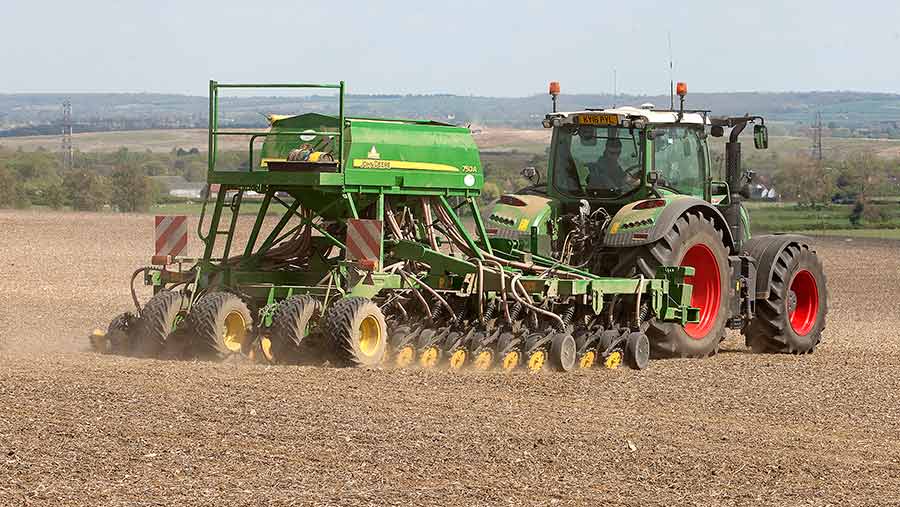 “We decided on a 6m John Deere 750A. Clearly if it was to do a significant area we would be breaking the CTF taboo of running between the 12m wheelings. But I felt that was a compromise worth having and it did such a good job that it did virtually all the work last autumn – nearly 2,000ha.”

There were other compromises with the revised Roxhill reduced traffic system, too. Despite ordering Lexion 780s with new 12m headers, Mr Barnes didn’t opt for the extended folding discharge auger that would enable unloading to occur on the adjacent harvester run.

“I didn’t want the extra mechanical complexity or expense of the wraparound spout. I can put up with the chaser bin running with just one wheel in the previous bout for the couple of minutes it takes to unload. For me CTF has to be practically workable otherwise it simply doesn’t happen.

“We’re also breaking the rules when it comes to repeated wheelings year-on-year. The 6m Deere means we now have the excuse to side-shift the combines’ bouts to match the drill if we’ve really made a mess of the tramlines.

“Similarly we’ll sometimes rip them out if they’ve got really rutted. CTF extremists would say that was the wrong thing to do, but with contract farming customers to keep happy we’ve got to be realistic about how things look.”

With the drills sorted you would be forgiven for thinking things might stay the same at Roxhill. But Mr Barnes isn’t one to sit still. With it looking likely that the John Deere and the Dale will share the workload for the foreseeable future, there are plans afoot to modify the home-built 12m seeder.

The first alteration under consideration is to halve the number of coulters, widening row widths to 25cm. This would enable the existing hopper to be split, allowing one metering system to be used for fertiliser and the other for seed.

More cover crops are being planted, so the wider row spacing would improve the Dale’s versatility and massively cut the horsepower required to pull it. Currently a 360hp Fendt 936 is the tractor of choice – it’s hoped that a 240hp 724 could be employed in its place, which will burn much less diesel.

“Real world CTF is all about understanding where the traffic runs so you can identify where problems occur and deal with them accordingly.” 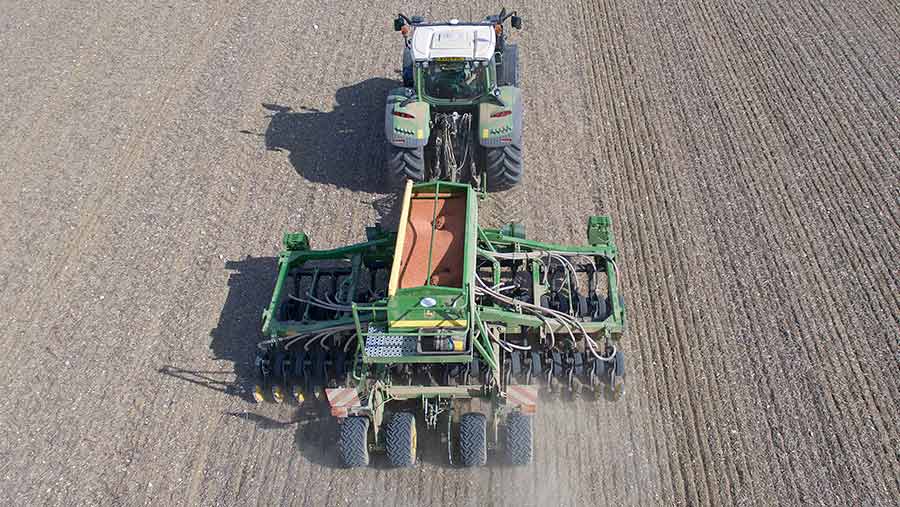 “As an example, we’ve had combines dropping rows of chaff that could cause serious headaches if they were repeated year-on-year. Being able to shift sideways by half a run each season means we’re not compounding the problem.

“We’re no longer running a true CTF set-up – ours is now a much more practical, flexible approach that we can adapt as different conditions present themselves.”

Staff: Robert Barnes, Stuart Beardsell and three others full-time plus another seven at harvest