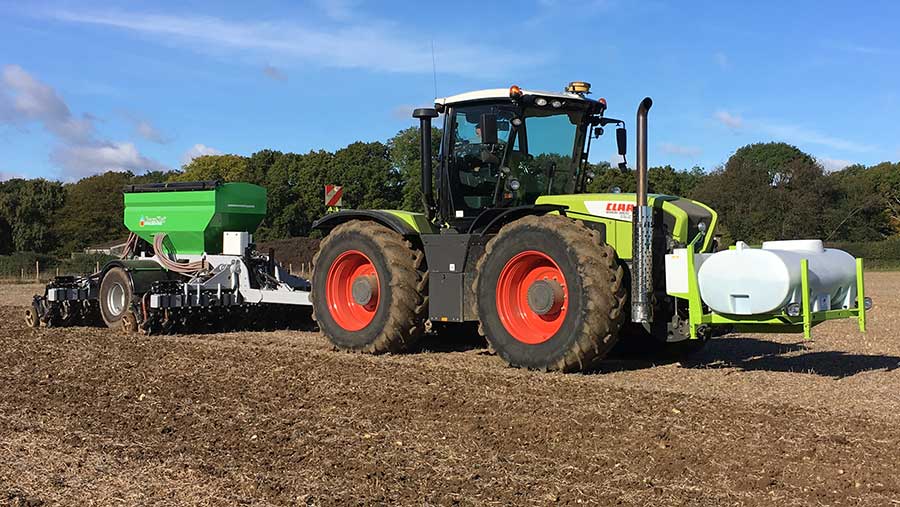 A wind of change is sweeping through UK crop establishment practices, with more and more growers being lured into splashing the cash on a no-till drill.

With this increased uptake of either tine- or disc-based no-till systems that stick seed straight into stubbles for the sake of soil health come several related businesses helping to make the transition a success.

One such company is Devon-based TT Engineering & Fabrication, which is offering tailor-made liquid fertiliser injection kits for all major direct drills.

It was an approach from Edaphos agronomist and biological farming guru Mike Harrington that presented the opportunity for founder Trevor Tappin to branch into liquid fertiliser application.

Mr Harrington needed a cost-effective way of delivering the liquid starter feeds he recommends to his no-till adopters, often at low application rates.

While some drill manufacturers offer their own liquid applicators, these are typically sold as a complete kit and come with a hefty price-tag. Other retrofit options are similarly expensive and use large hydraulic pumps geared up for veg crop applications of 400-600 litres/ha.

The problem with this is twofold. First, they are overpowered for the typical target rates of 60-100 litres/ha in no-till systems. Second, the higher operating pressure can adversely affect any living biological products being used. 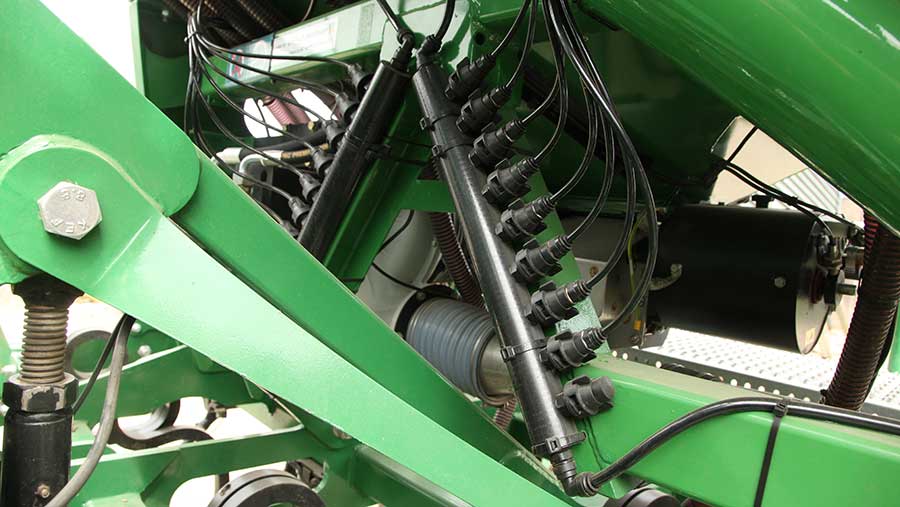 A polyethylene pipe manifold attached to the drill

Some of the mixtures can also be extremely abrasive, which in common liquid applicators on the market has led to reliability problems and, in some cases, complete pump failure.

To overcome some of these challenges, Mr Tappin developed a system that he has now fitted to popular no-till drills including the Cross Slot, Weaving and John Deere’s 750A.

Rather than selling a ready-made standard kit, Mr Tappin consults each customer on their requirements and tailors each set-up to suit, allowing him to keep control of costs relative to needs.

“Price is agreed once speaking to the customer and if they want to fit it themselves or even help with installation, that is reflected in the price, as it is quicker and requires less or none of my time,” Mr Tappin explains.

“Some may also have their own parts – such as an old tank – that they wish to use, so we will just supply them with the pumps and pipework.”

Mr Tappin uses Enduramaxx polyethylene tanks with a capacity matched to drill size and either mounted on the tractor’s front linkage for smaller drills or on the drill itself for larger trailed machines.

“It is pointless to carry any more weight than you need, so the fertiliser tank is sized to cover one hopper full of seed, so the operator can fill up with both at the same time,” he says.

For drill-mounted systems, the company builds all the holding framework and, on John Deere 750As, has incorporated a platform with railings for safe access to the top of the tank. Most of the materials used, such as railings, match in appearance what is already on the machine.

“Despite it being a retrofit, everything should look like it has always been on there,” says Mr Tappin.

On top of the tank is a 2in quick-coupling valve for filling. With most of the products used through the system coming in IBCs, this allows gravity to take the liquid from a container on a trailer or forklift.

Whichever configuration, all come with the TP2000 pump system that has two electronically driven variable speed units, drawing just 16-20amps of power and pushing out about 22 litres/min – ideally suited to the lower application rates.

Mr Tappin opts for electric pumps to minimise the back-end oil requirement, which can be high on some drills such as the Cross Slot. This can result in the slowing of fans when pulling in and out of work, and potential seed blockages.

Doubling up on pumps improves reliability, as the last thing an operator needs in a short drilling window is downtime. Each pump switches on and off on alternate drill bouts to avoid them working constantly on long shifts.

Also with reliability in mind, the top side of the pressure accumulator is charged with oil instead of the fertiliser brew to prevent the pressure gauge being corroded.

A 50-litre clean water tank is linked directly to the pump system, so at the end of a shift the main tank can be shut off and the pumps and pipework flushed without any recirculation and dilution of the fertiliser.

In operation, the liquid is moved from the main tank via an inline filter to a manifold that distributes the product to the openers through black 6mm flexible hose.

Each line has a specialist anti-drip valve. Mr Tappin says he initially trialled a cheap version, consisting of a spring and ball bearing, but found that fertiliser was eating the springs and causing the valves to fail, so he developed his own more robust component for when his system went to market. 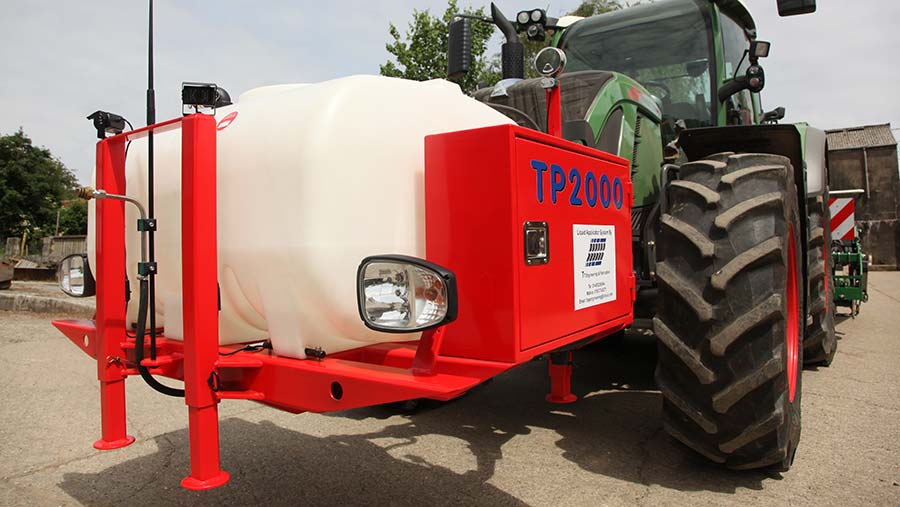 He says: “The bearing was either dropping down to block a pipe completely, or we’d get dripping – and you can’t afford for liquid to drip down onto bearings if it’s a disc drill.

“The placement of the pipe is also critical to make sure the disc assembly isn’t picking up the fertiliser from the soil and corroding the components.”

Calibration is carried out through a specific outlet, saving the need to run the liquid out over the width of the drill, and the system is managed by a standard control box with auto shutoff and a suction filter blockage warning light.

There are several optional extras, including a road light kit and safety cameras with an in-cab monitor for front tank-mounted systems, allowing drivers to ease out of gateways and on to roads safely.

Customers can also spec their kit out with an outlet blockage monitor, bout control and variable rate control. Depending on size of machine and specification, a fully fitted system will cost between £8,000 and £14,000.

Biological products are becoming more popular, particularly when placed next to seed to encourage stronger and healthier rooting in crops such as wheat.

However, more no-tillers are looking to apply beneficial bacteria and fungi later in the season as foliar sprays, and TT Engineering & Fabrication is offering a low-pressure nozzle kit for its front linkage mounted liquid injection set-ups. 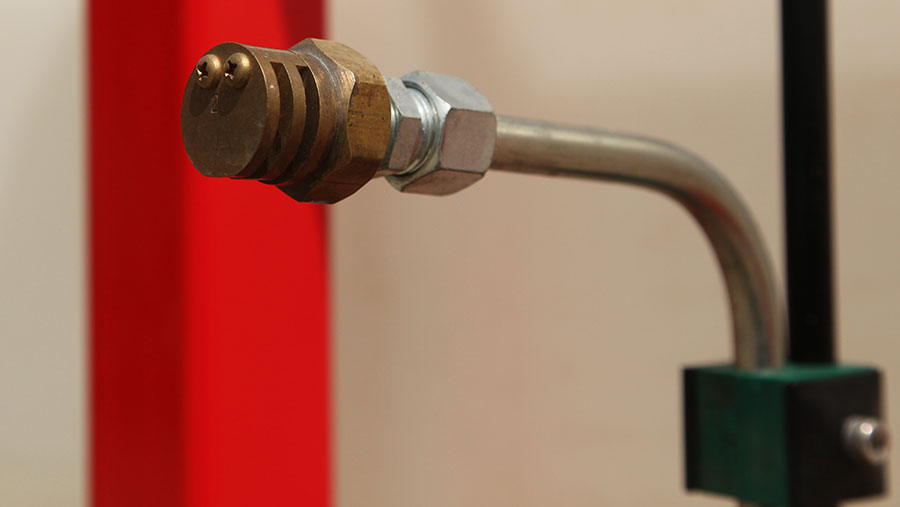 With conventional crop sprayers typically running at 3bar (about 30-40 psi) through small orifice nozzles that are almost impossible to get completely clean, the high pressure and harsh chemical residues have the potential to reduce the efficacy when applying biological products.

To keep biological and chemical applications separate and maintain product efficacy, a single brass low pressure nozzle (see picture) to the TP2000 and can be taken off the drilling rig and placed on an ATV or UTV for spraying standing crops or grassland at just 25psi.

One nozzle has a bout width of 10-17m depending on pump pressure and Mr Tappin says it is also possible to link the TP2000 to multiple nozzles across an adapted sprayer boom if more width is required.