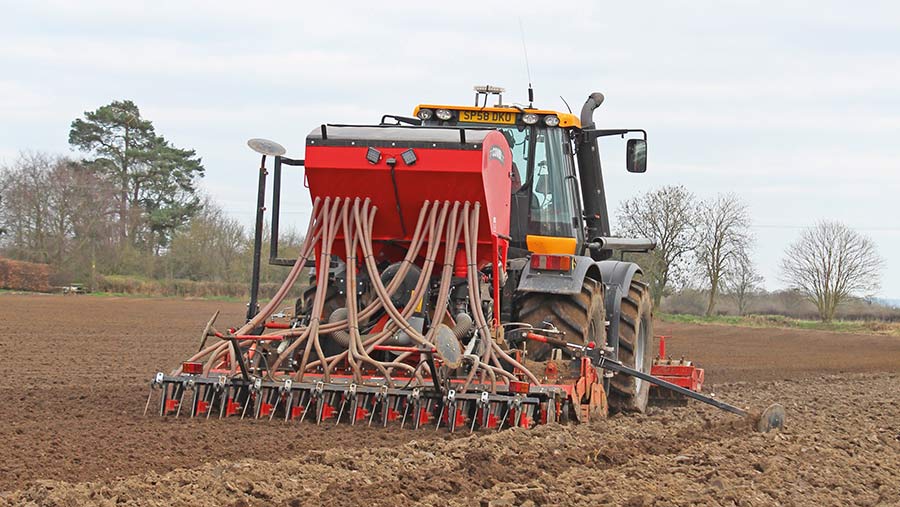 Armed with a row of soil-loosening legs, a power harrow and a set of Vaderstad disc coulters, the Combi-Plus drill from Bramleys Seed Establishment offers plenty of options for getting a crop in the ground.

Its creator, Yorkshire farmer Phil Bramley, came up with the concept having struggled to find a simple, compact disc drill to pull behind his 130hp Valtra.

He started the process by building and testing a series of prototypes on his farm near Bolton Percy, and once the design was perfected, he began making them to order.

There are now a handful of Bramleys combi drills working in the UK, one of which belongs to York-based independent agronomist Will Taylor of WMT Agriculture, who recently branched out into contract spraying and drilling. 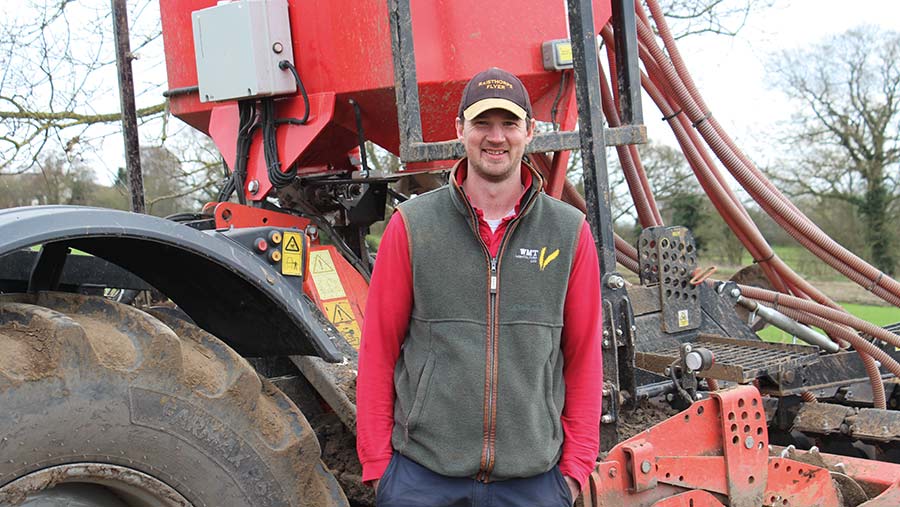 As a small-time operator starting afresh, he needed a machine that was capable of working in a wide range of seeding situations.

“In an ideal world, you’d have a pick of drills to suit the conditions on a particular farm or season, but for reliable establishment in all soil types, this machine takes a bit of beating.”

“This setup gives me plenty of options – direct-drilling into a stubble, working down and seeding on furrows or going on to cultivated ground,” he says.

“Plus, having the ability to put fertiliser down at the same time saves having to go through the field again, and it concentrates the nutrients where they’re really needed.”

Rather than buying a completely new drill and harrow setup, Mr Taylor tracked down a tidy second-hand 3m Kuhn HR3004 power harrow for £6,750 and sent it to Mr Bramley to fit out with a front toolbar and drill.

His machine is built to the same spec as a regular Combi-Plus model, apart from the fact his harrow has a standard toothed packer roller rather than the usual Guttler Simplex 45.

He also opted for black-and-red paintwork, instead of the typical all-red livery.

The total bill from Bramleys, including tramline and centre markers, plus a set of tungsten-tipped harrow tines, ran to about £27,000. 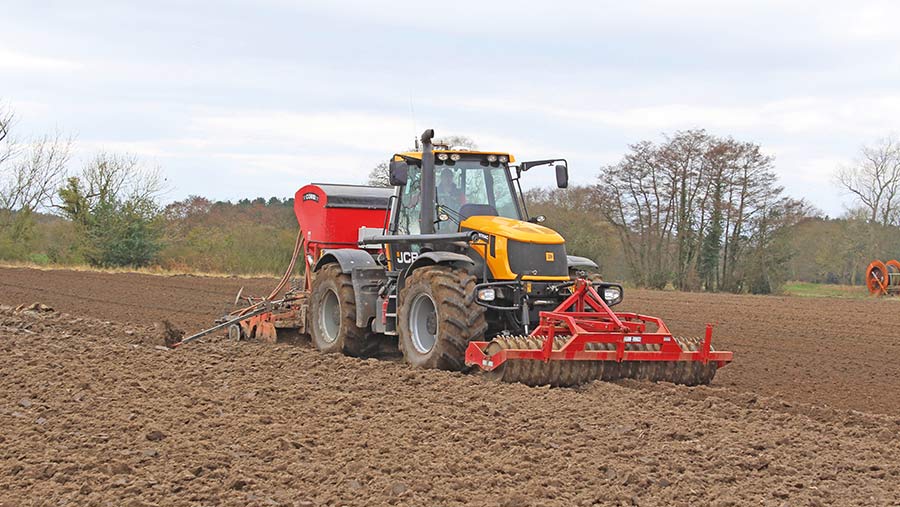 This same tractor is used with Mr Taylor’s 24m Knight demount sprayer and it has plenty of power for the job.

Working speeds of up to 10kph are possible and he says the condition of the seed-bed limits progress rather than power, even when direct-drilling on heavy ground.

To give some additional clod bashing when working directly on to furrows, he also purchased a second-hand Farm Force packer roller press for £2,500. 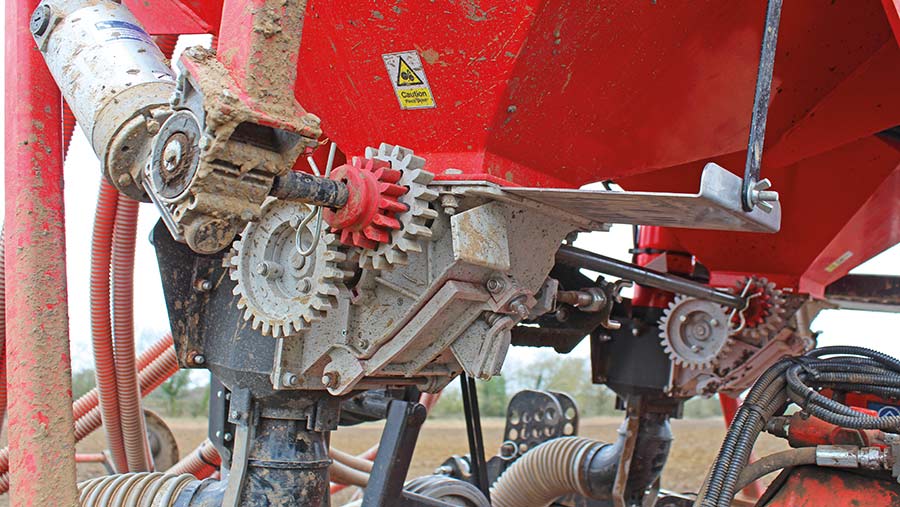 Mr Taylor took delivery of the drill in August 2020 and put it straight to work direct-drilling oilseed rape.

For this task, the four JJ Metcalfe NG legs on the front toolbar were set to run at 200mm (8in) and the spacing of the front coulters was altered so that they fell in line with the rears.

This meant the DAP fertiliser and seed were placed in the same 250mm band.

Lowering the front discs also ensured the nutrients were dribbled just below the seed. This was achieved by turning a pair of screw linkages that adjust the level of the two rows of discs. 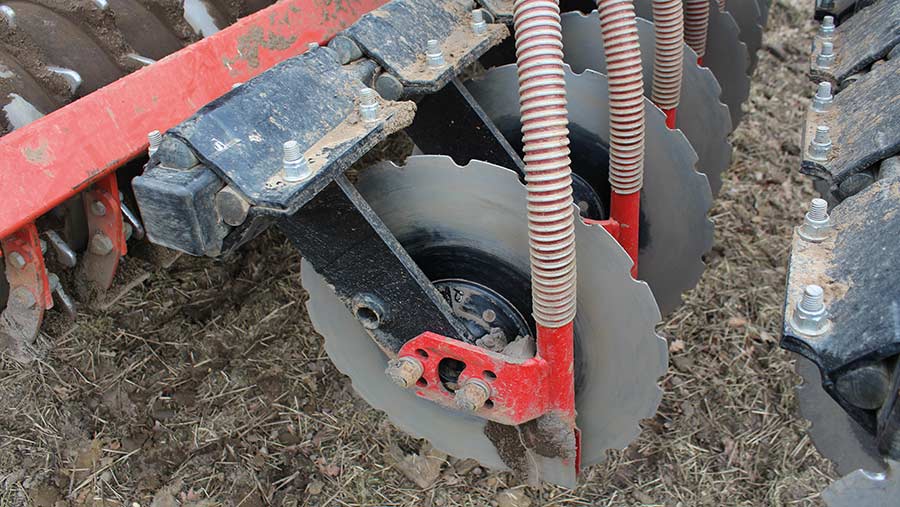 According to Mr Taylor, the crops established well with even seed depth and emergence. The only problem he had was with a sticking sensor for the tramlining sequence that meant he was putting a wheeling in every run.

He didn’t realise this was happening for a while, which provided plenty of entertainment for the neighbours, but as soon as he noticed what was going on, Mr Bramley sorted it.

The rest of his autumn workload consisted of wheat and barley established into both furrows and ground worked with a Simba DTX.

In all of these situations, he left the discs in their floating position, which he says gave a decent seeding depth.

“Even in rough seed-beds, they slice through clods and bury the seed well – the fact that they’re set at an angle also means they do a fair amount of cultivating of their own, which helps give a better finish.”

The only situation where he’s applied additional pressure to the discs is when establishing beans.

To give maximum seeding depth, he fixed the disc frame in its lowest position, which locks it rigidly to the power harrow and transfers much of the weight of the drill on to the coulters. 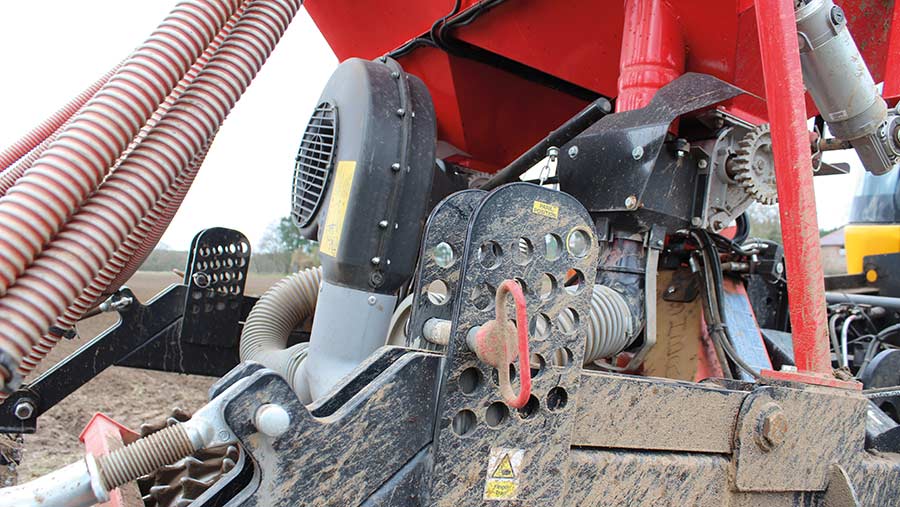 Initially, Mr Taylor went old-school and relied solely on the drill’s hydraulic centre markers, but to improve accuracy and help in conditions where it’s difficult to see the mark, he decided to invest in a GPS autosteer system.

He opted for a Trimble setup, provided by Manterra, with a GFX350 display running on the 150mm pass-to-pass accuracy Rangepoint RTX signal, and an EZ-Pilot steering kit.

This has been accurate enough in most situations, but it can lose signal when shaded by trees.

“I started off using it without the markers and just dropped them in if I had signal problems, but I now use both all the time and they back each other up nicely,” he says.

The package set him back £5,800, including the first year’s signal subscription, which normally costs about £300. 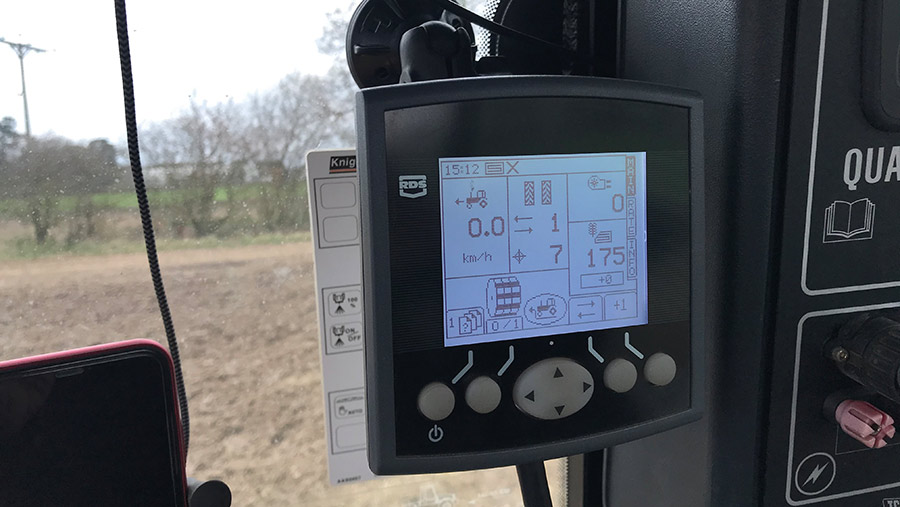 To date, the drill has established just over 200ha, and since the tramline debacle was rectified, he’s had no problems with it.

Setup is straightforward and the fact it has such a simple, solid construction means it should stand the test of time. “The frame is strong and the Vaderstad discs are so thick that I can’t see them wearing out any time soon.”

The tungsten power harrow tines are also said to have a lifespan of at least 800ha, so he hopes his ongoing running costs will be minimal.

One downside is that the compact nature of the front toolbar means there’s no room for the legs to break back if they hit something solid, says Mr Taylor.

“You’ve got to be confident that you know the land, and if I think there’s a risk of big stones, I’ll take it fairly steady.”

Tweaks that he would like to make include adding windows into the rear of the hopper to view seed and fert levels at a glance, as well as a speedier method of adjusting coulter alignment when switching between the 125mm cereal and 250mm oilseed rape spacings. 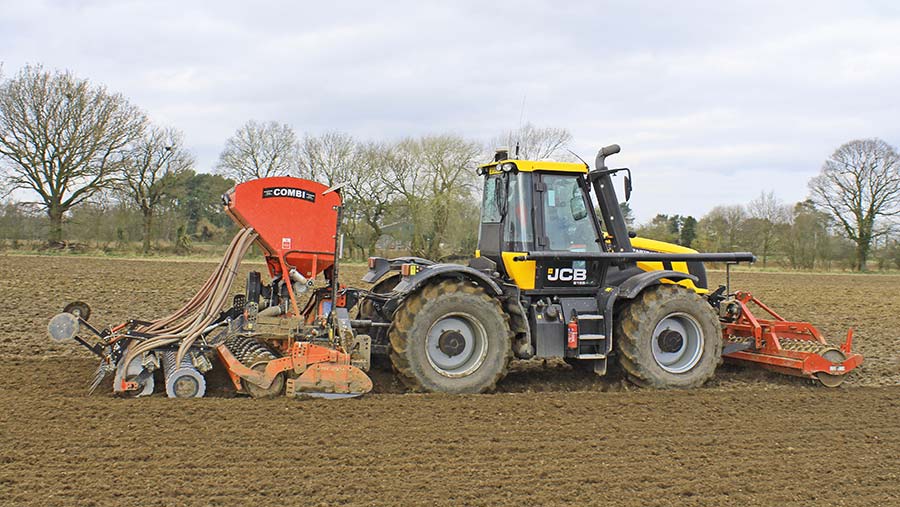 The next project is to fit a front tank so that fertiliser can be applied when drilling cereals.

Plans need to be finalised, but the aim is to run the drill in its 250mm oilseed rape configuration and use the front tank to up seed capacity.

Ideally, this will just transfer seed to the rear hopper, rather than having its own metering system.

Mr Bramley is also working on a simpler version of the toolbar that just accommodates wheel track eradicators.