A new retrofit option has allowed Mzuri to add precision seeding to its repertoire. The manufacturer reveals the thinking behind the kit and a West Sussex grower describes the results of a trial.

British manufacturer Mzuri has developed a conversion kit that turns its Pro-Til strip-till cereal drill into a precision planter suitable for establishing crops such as grain and forage maize.

It was a severe drought in eastern Europe – a market where the firm has a growing presence – that provided founder and Worcestershire farmer Martin Lole with the inspiration to branch into precision seeding. 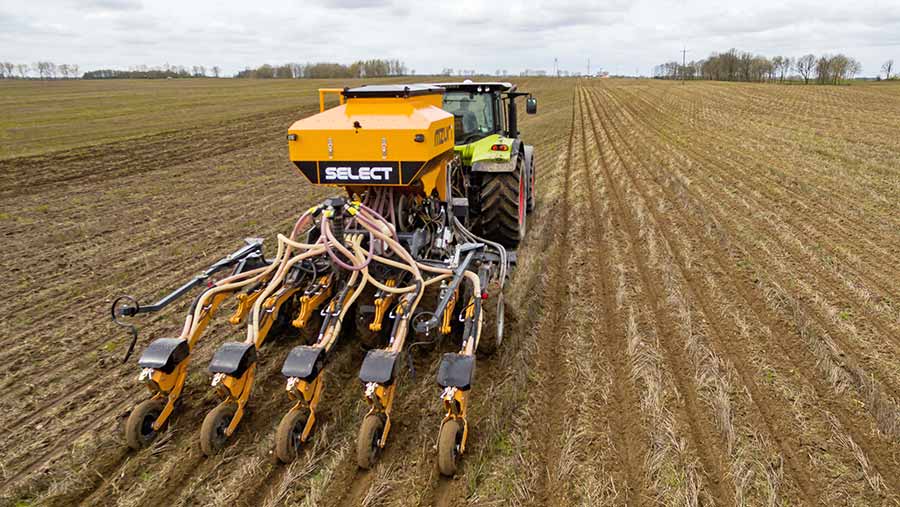 With some growers in the region relying on a plough-based cultivation system to prepare a seed-bed on fragile soils, moisture can soon be lost if the weather turns hot and dry during the spring.

Where growers had been using this “conventional” method, vast areas of the corn crop failed as seed struggled to germinate or seedlings died of thirst in the extremely dry conditions.

In a growing trend, some Ukrainian Mzuri Pro-Til owners had been lifting alternate coulters out of work to achieve the wide row spacing required for maize growing and using the strip-till machine to plant their crops.

As the same drought took hold, seed drilled straight into stubble using strip-till survived and grew away, providing growers with a crop to harvest in what was an extremely testing summer.

Mr Lole says this was down to improved moisture conservation using a strip-till system, where leading tines cultivate in a narrow band ahead of the seed coulter to the rear, leaving the vast proportion of the soil’s surface untouched.

However, the same growers were using conventional seed metering on a standard Pro-Til, compromising yield from sub-optimal seed placement – a critical component in bumper maize crops. 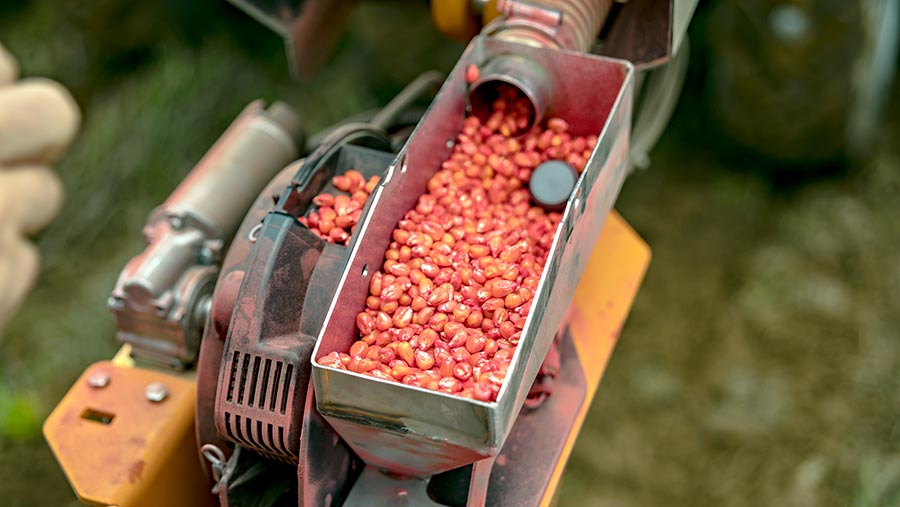 “You can get good yields with maize using conventional metering, but you can’t get the grain numbers and size. Ideally, you need about 10cm spacing between the seed for two large, even cobs with seed right to the tip.

“That’s prompted us to go into precision seeding, as there is a big demand for it in eastern Europe where they grow a lot of wide row, precision-drilled crops such as maize, sunflower and soya,” says Mr Lole.

After undoing a couple of bolts, the existing shoe coulter can be removed and replaced by an electronic precision seeding unit and coulter assembly that offers single seed placement. The whole job takes a couple of hours.

In addition, rather than having individual seed hoppers on each metering unit like many maize drills, each unit has a mini hopper connected via flexihose to the seed distribution head. 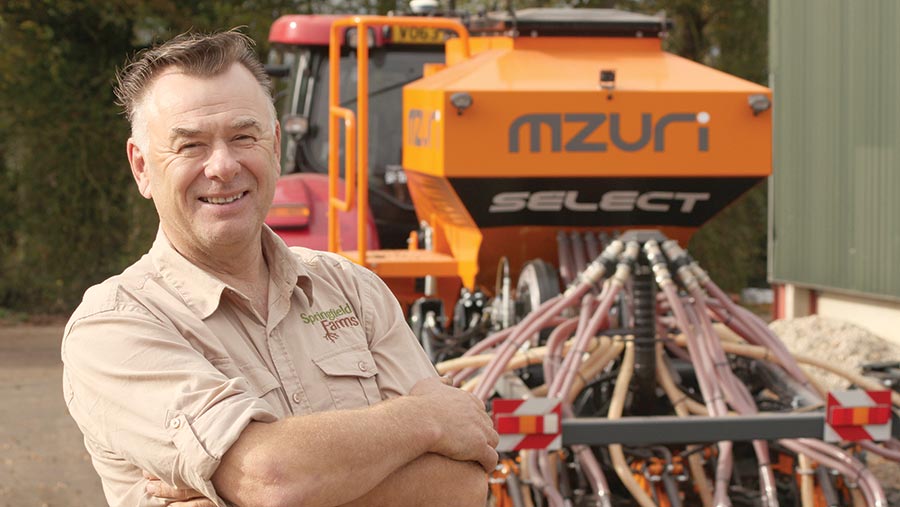 These are fed from the main bulk tank via the standard hydraulic metering unit used for drilling other crops.

Mr Lole wouldn’t be drawn on technical details because he is currently applying for a patent, but says Mzuri has engineered a mechanism that keeps the mini hopper topped up from the bulk tank for less frequent filling.

The only other modification on the drill to accommodate the conversion is an extra electronic motor module that controls the precision units, which runs through the standard Mzuri in-cab computer.

While the company sees the greatest demand for its conversion kits in eastern European markets, Mr Lole believes there will be plenty of interest at home too.

The UK maize area has been creeping up for many years and this upsurge has accelerated more recently as anaerobic digester (AD) plants for power generation pop up all over the country. 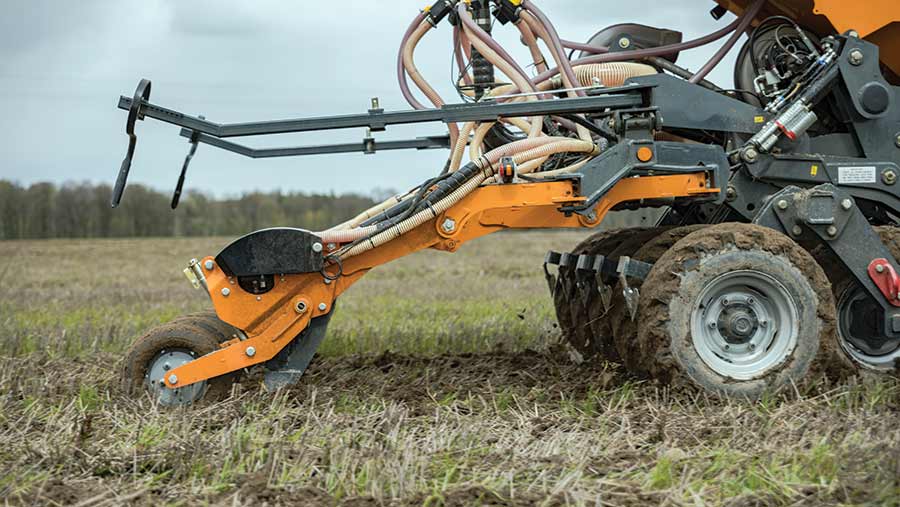 With a spotlight on the potential impact of more intense maize cultivation on soils, growers are looking at alternatives to plough-based establishment methods to reduce issues such as erosion and run-off in the wetter UK climate.

In addition, having one drill for planting both conventional arable crops and maize can cut capital investment and a one-pass system will reduce establishment costs and improve soil structure and health.

The conversion kit will be launched this year and Mzuri users can expect to pay in the region of £2,000 per unit, with overall cost dependant on the width of the machine.

One West Sussex grower in Steyning has successfully trialled a demo Mzuri precision conversion kit this year, with establishment cost savings and its flexibility likely to see the business invest in its own next spring.

Frans de Boer grows about 243ha of maize on the edge of the South Downs, with 81ha cut with the combine for feed grain and 162ha fed to the farm’s 500kW anaerobic digester (AD) plant.

In the past, the maize ground has been prepared with a plough-based or min-till system, with choice dependent on season and trash levels from the previous crop. Maize is then drilled with a farm’s own eight-row precision maize drill.

However, in the drive for cost efficiency and reducing impact on the farm’s soils – a mix of light sands, flinty downland and medium loams – Mr de Boer has decided to explore the potential of strip-till for maize establishment.

A demo 3m Pro-Til Select with precision conversion kit was delivered in the spring and Mr de Boer set up a comparison trial.

He drilled forage maize into both cultivated ground and direct into wheat stubble with the Mzuri and pitched it against the farm’s conventional establishment system.

“Where we did a like-for-like trial on cultivated ground and there was no difference in yield, but the strip-tilled maize into wheat stubble yielded about 5-8% less than a conventionally established crop,” explains Mr de Boer.

Mr de Boer says he had anticipated a higher drop in yield of about 10%, particularly in the first year of strip-till on the chosen site, adding that it takes a couple of years to get the soil structure and biology working in the farmer’s favour.

“Maize has lazy roots and is sensitive to tighter soils, so [the result] was better than we anticipated and all-in-all, we are pleased,” he adds. 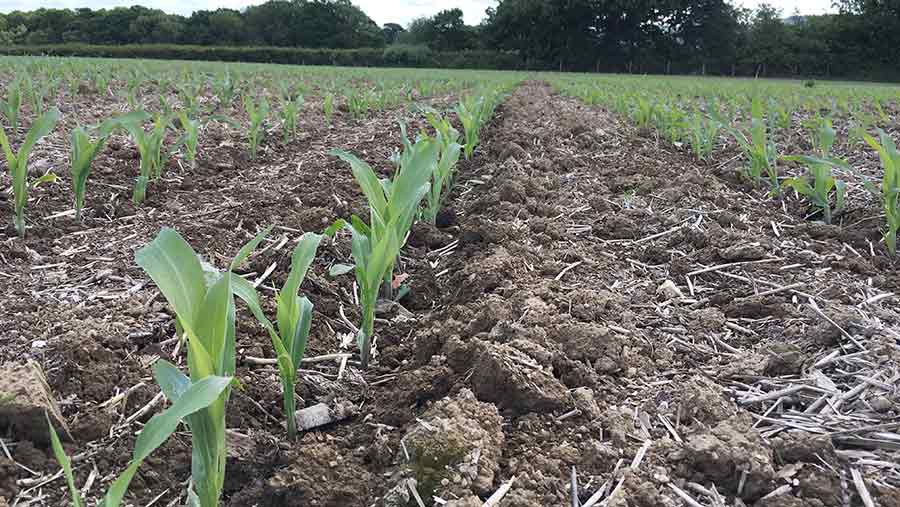 Although there was yield drop, the blow was softened by the savings in establishment cost, with the conventional system setting Mr de Boer back about £143/ha, but the one pass into wheat stubble just £69/ha.

The only issue for Mr de Boer is that row spacing is 60cm, so won’t allow him to use the Mzuri conversion for drilling his grain maize, which is harvested with a corn front set up for 75cm widths.

However, with the Mzuri Pro-Til primarily a conventional cereal drill with an optimum spacing of 30cm, he says the compromise is worthwhile for the flexibility to strip-till his wheat and hybrid rye crops elsewhere in the rotation during the autumn.

Mr de Boer adds there is still a place for min-till and conventional establishment in a wet year, but when the going is good heading straight in with the strip-till machine will save time, money and diesel.

“The maize conversion is a great add on and we are considering one for next season, if we can find a way to subsidise the investment. There are grants available for soil improvement initiatives and CO2 savings,” he adds.