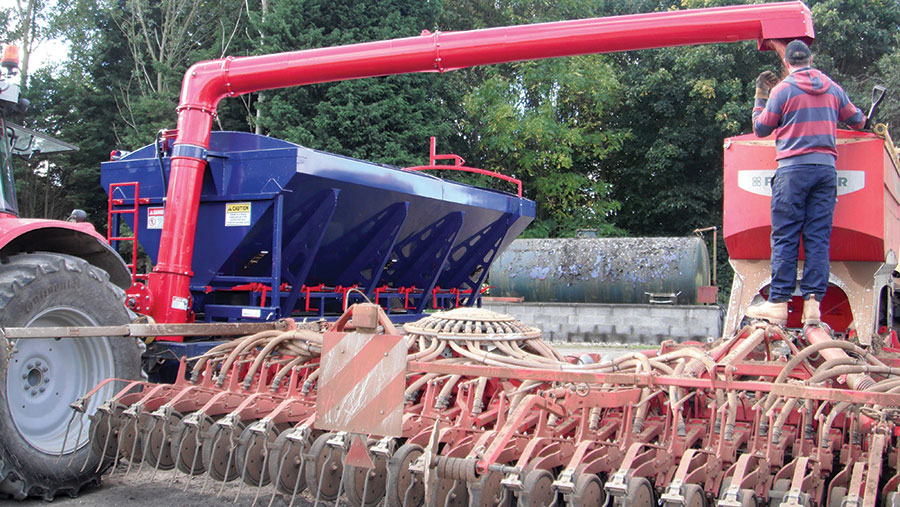 DO NOT REUSE - picture submitted by Nick Fone

The Midlands Machinery Show prides itself on providing a launchpad for smaller companies.

Here we profile two firms with something a bit different on offer at the event.

Both E Skinns and Dofygate will be presenting their kit at the Midlands Machinery Show, which takes place on Wednesday 25 and Thursday 26 November at the Newark Showground, Lincoln, Newark and is organised by the Newark and Nottinghamshire Agricultural Society.

See also: 14 must see bits of kit at the Midlands Machinery Show

E Skinns’ most notable engineering marvel is its demountable hopper, while Dofygate is gaining a reputation for its versatile range of remove-controlled livestock barriers.

The 8-10t body has a single hydraulically driven auger in the base that draws material to the front. Mounted over the drawbar is a pto-driven auger arrangement borrowed from 1970s Massey Ferguson combines.

Several have been stitched together to form the discharge spout so that when it is swung out it reaches to over 5m – more than enough length to drop seed into an 8m-wide drill.

Having the augers powered independently means the flow of seed can be controlled to ensure the unloading auger runs empty once levels in the drill hopper reach the brim.

That way there’s a clean cut-off and no grain in the sleeve to generate unnecessary weight or load on the auger the next time it’s fired up.

Sliders in the bottom of the hopper can be used to control the flow of material and the nature of the design means weight loading is always kept over the drawbar, aiding traction and making for a better road-ride.

The E Skinns Rapid Drill Filler is reckoned to improve operator safety by doing away with swinging bags of seed suspended from outstretched loader booms and because it deals with bulk loads is likely to be most attractive to those home-saving seed.

Frustrated by trying to get a loader in and out of cattle yards single-handedly without animals escaping, Norfolk farmer Jim Alston designed a remote-controlled barrier that would overcome the problem.

“We developed the idea of a pair of folding barriers but they had to be easy to fit and not require a power source.

“Once we’d got the basic concept working the biggest challenge was taking it from a farm workshop-built unit to a professional, saleable product.”

With a local engineering firm and an electronics company, Mr Alston adapted the Dofygate to include an electric fence energiser that only produces a shock when an animal makes contact with the unit’s whippy electrified arms.

This cuts power consumption from 50mA to just 0.5mA and made it possible to run the unit off a battery and solar-panel.

That makes installation a simple case of screwing the unit to a post – one of its biggest selling points.

Since being launched 18 months ago, 50 have been sold and there are now special versions for use as dog gates and pedestrian barriers (without the shock).