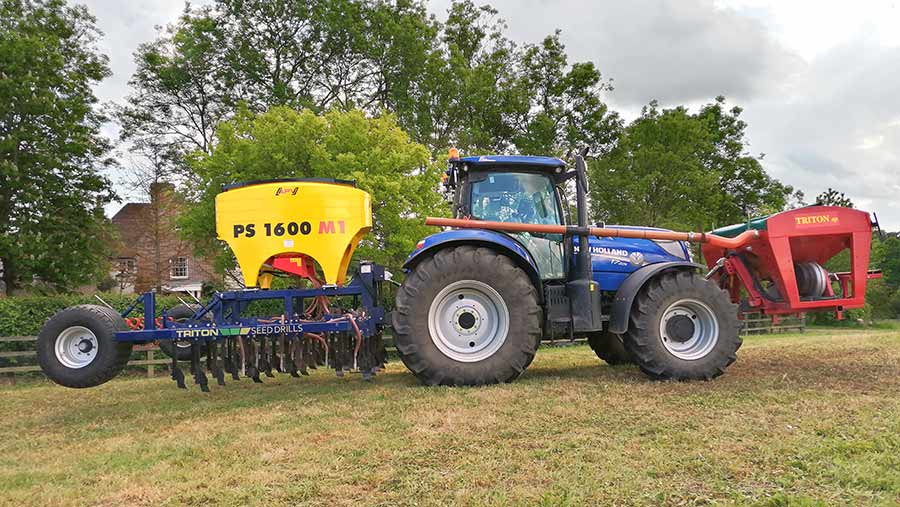 We asked Yorkshire farmer Robert Hinchcliffe to run through the good points and bad points of his 3m-wide Triton drill and explain why he picked it.

I’m using a 3m Triton tine drill with a 1.5t Weaving front linkage-mounted seed hopper, which sits on our 2018 Case 150 Puma. It arrived last August (2018) just in time for us to drill the oilseed rape.

You can opt to have a hopper mounted on the drill frame itself, but to save having to put extra weight on the tractor to keep grip with the front wheels, we went with the front tank instead. 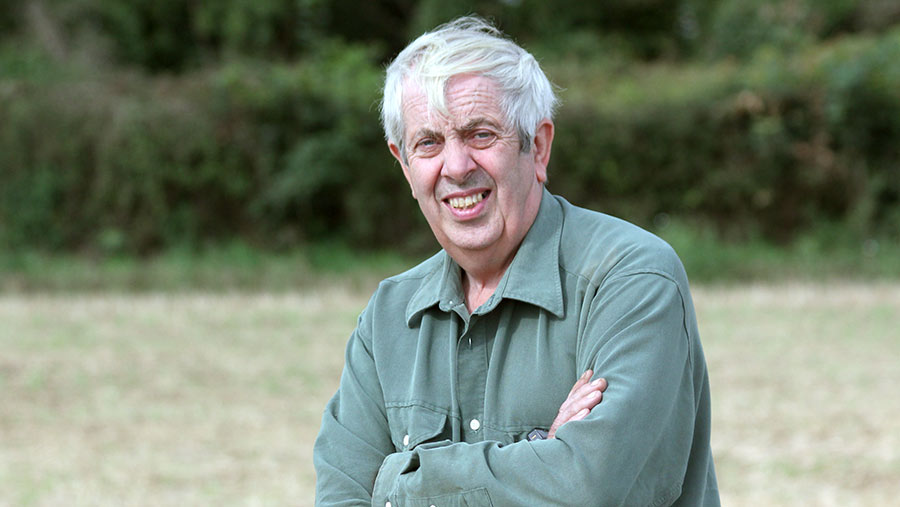 Ours was one of the first drills to be fabricated in Leeds by a specialist manufacturing company rather than at founder Simon Chaplin’s farm workshop, so it is well made. It has the original Triton tine design, although you can now get more options for differing conditions.

Why did you change to a direct drill?

There was a 40% grant for changing drills, so it offered a chance for me to move to a direct drill.

I was going to buy a 3m Moore, but we haven’t had much success with disc drills over the years, having tried a few, including Bettison and Vaderstad machines.

We have high magnesium soils in places, so they absorb more water and the top 4in can sit wet and result in poor establishment.

I saw the Triton in the farming press and thought it was the perfect drill for me and my land, as it doesn’t drop the seed into a solid slot. It also allows us to drill even later than the power harrow combination, which helps with blackgrass control.

It has 18 75cm-long seeding tines, which work about 6in below the seed depth to cut and loosen a drainage channel. Seed is dropped just behind the tine on to a deflector plate, which directs the seed to the side of the channel.

Nine closing tines or “side presses” then run between each row about three-quarters to one inch below the seeding depth to consolidate the soil around the seed. All the tines are on a shear pin system for shock protection.

There are no press wheels and that is the beauty of the system – it doesn’t put any unnecessary compaction in the row.

I only roll after drilling oilseed rape or cereals on the lightest land. Depth is controlled on two ground wheels to the back and the top link arm. If it is wet and the depth wheels clog up, you can raise them out of work and let the linkage do all the work.

Crop emergence has been even and about four to five days quicker than crops drilled with the power harrow drill combination. It also performed better where I drilled wheat in November for improved blackgrass control.

Side by side, the Triton November-drilled wheat grew away well, and with a pre-emergence herbicide we got very good blackgrass control last season, but the combi-drilled ground stayed wet over winter and a lot of seed rotted in the ground.

As we want to keep drilling later to get on top of blackgrass, it will take the pressure off, as we know we can get successful establishment later in the autumn. It also disturbs relatively little soil and only moves it sideways, so isn’t mixing blackgrass seed through the profile.

We had a bumper harvest last year and the drill struggled with the amount of straw residue left on the surface and regularly blocked up. Clearance between tines could be better, but the combine straw chopper wasn’t performing as it should, so that didn’t help.

I had the chopper fixed for this harvest and chop length is much better, down from 6in to between 1in and 2in, so there should be fewer problems this autumn.